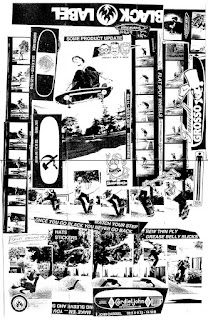 You've got John Lucero's art with copies of photos and text from ads, all laid out on a photocopier to be printed on an 11" x 17" piece of paper.

I've always been a fan of Lucero. I didn't know all that much about him until the last eight years or so once skateboarding started documenting its past more. I knew that he did graphics for people and I really liked the early Lucero/Black Label art, but I never realized the extent to which he was involved in things. Skateboarder's current Raiders Of The Lost Archives episodes with John are a lot of fun to watch. He comes off as a very likable guy that loves skateboarding, similar to Lance Mountain. I know this comparison has been made before, but Lucero is skateboarding's fun loving uncle.

The team represented in the collage includes John Cardiel, Max Evans, Jeff Grosso, Shawn Martin, Skip Pronier and Ben Schroeder. I'm pretty sure Gino Iannucci would have been on the team at this point, but he might not have had any ads just yet. Jason Dill might still have been on Blockhead. Keep in mind that this is from early 1992 and all the photos would have probably been from 1991.
Posted by Justin at 9:37 AM

Soo rad seeing those old decks. Brings back a memory of going to Black Label around '92 with Jonas Wray so he could grab a few decks. Grosso was asleep on a couch and Dill was in the warehouse learning Primo slides. Also, Lucero sold me a blemished Max Evans deck for $20. I was pumped and completely starstruck!

What time period was woodstock on?

Good question. I'm going to venture a guess and say that Simon maybe was still on Black Label. He probably was on the team when the photos were taken. He actually wasn't on Black Label for very long. He was on Koklieb at some point in 1992, which was a company he did with J.J. Rogers, Corey O'Brien and Andy Oliveria. Next he rode for New School and then Sonic.

Brian Chung was on Black Label during this time. He was one of the original riders for Real and quit to ride for Black Label around 92.

....Grosso sleeping on the couch.. Hahaha! John use to park his van in the warehouse, I snuck past Grosso (asleep on couch) and hid in the van till he woke up. Jumped out on him walking by and he pissed his shorts. Good times.