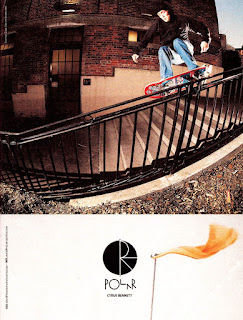 "I was at Labor Skateshop right after I left 3D, and I asked the guy what boards sell best. He said Palace, Polar, and Welcome. I asked him why and he said something along the lines of, "A lot of these kids aren't at this ability where they can relate to the likes of Nyjah, so they relate to a Polar video way more." The type of skating associated with those companies is way more tangible for someone who just wants to skate. The skating in their videos could actually happen on a session with regular people." - Alex Olson

I'm pretty sure this guy rides for Alex Olson's 917 now. Polar coverage was a little hard to find so I used whatever I could track down, even if it was for an ex-rider. Theories of Atlantis was running advertisements in Transworld for the brands they distribute, but that appears to have stopped as of late.

Zach Malfa-Kowalski was the photographer.