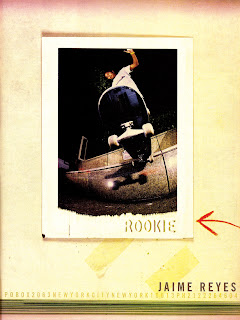 Jaime was an am for Real in the time before Rookie started. She was also on Gallaz, the girls division of Globe footwear in the early 2000s. Jaime was probably on par with Elissa Steamer in terms of skill and definitely raised the bar for quality women's skateboarding. She got the cover of Thrasher in the early 1990s, too.

In other skateboard happenings, the Manny Santiago part that just went online is pretty damn good. I'm not really feeling a couple of his sponsors, but the kid is coming up with some very complex tricks down rails. Good job, Manny.

There's a new Chrome Ball Incident interview up at Already Been Done with Chico Brenes. He's doing a lot of good things to promote skateboarding in Nicaragua.

haha. I met her just the other day at Maxfish. I heard she's there a lot.

Thanks for the post Justin, word up J. Reyes is the best female skater I have ever known personally, way back in the day our crew jumped her in (not like that!) and basically raised her from a little pup to a vicious pitbull.

When she got the Thrasher cover it was so rad, homegirl at homebase for the whole world to see, talk about Hawaiian pride, and the Non Fiction video part was dope but she was waaaay better than that showed.

Yeah Keith she is a Fish fixture for sure and she's been known to regulate dudes that act up but she's basically a sweetie...that til this day will absolutely wreck shop in a game of flatground SKATE.

By the way correct me if I'm wrong but I do believe that this photo is of a switch backside tailslide and is awesome.

Jaime is goofy so that does make this a switch back tail.