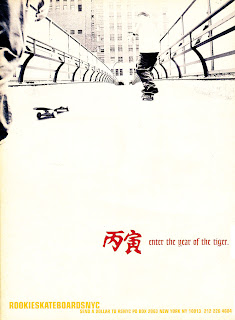 Rookie was started in 1998 and based out of New York City. The company definitely had the arty vibe to it, but not in a way that was overbearing or overdone. The original team was Jessie Van Roechoudt, Lauren Mollica and Kyla Duffy with Jaime Reyes joining after that. Jon Klein, Tino Razo, Sean Kelling, Shane Medanich, Dave Chesson, Simon Skipp and Lisa Whitaker were also on the team over the years.

In looking back, I really don't know all that much about Rookie, I just like their ads and decided to do a week of them.