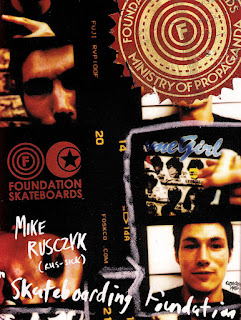 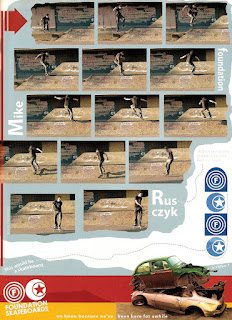 As I've written many a time before, the neat thing about doing this is highlighting some of the other skaters that weren't the big names of a particular era, but still were straight up rippers as good as, if not better than some of the flavors of the day. Mike's another example of why style and thoughtful trick selection matter. Check out his assorted parts for Foundation to see what I mean.

The bluntslide sequence by Brian Gaberman. 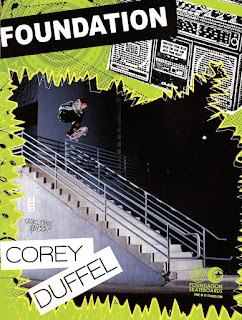 Dead Moon in the boombox.

Does Corey get a high five from Chet Childress after landing a trick in Cataclysmic Abyss? 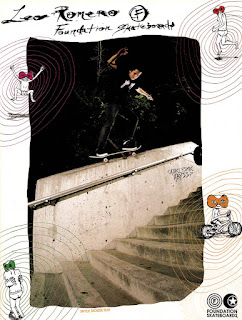 Leo does an unusual switch backside 50-50 down a hubba. You don't usually see many opposite foot moves from him. He's got the strong nollie game and will throw out switch flip tricks often, but pure switch tricks are a rarity. He'll nollie out of a frontside 50-50 down a handrail for fun, which is a subtle classic of a trick. 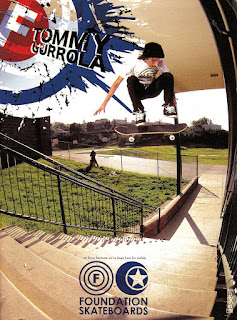 Tommy rode for Foundation, Pig Wheels, and Vans. His hometown is Bermuda Dunes, California. He had a Dire Straits scored part in Cataclysmic Abyss. His skating was very much of 2007 with lots of stairs and handrails. The section had a nice progression from ledges, ditches, and flat to more hammer style skateboarding. Tommy's favorite video part is Javier Sarmiento in The Firm's Can't Stop video. He likes Apple Computers and Dinosaur Jr.

I didn't have the issue of Skateboarder with his Who's Hot interview so this was a tough one to put together. I had forgotten he had a part in Cataclysmic Abyss. 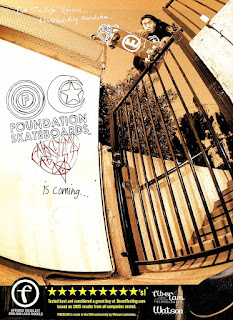 I put together a random week of Foundation stuff that has been sitting on the computer for a long time. Tum Yeto rotated ads for their companies so there wasn't always a F-Troop ad every month. This made it confusing because I'd find a cool ad and then struggle to find another. I gave up on the search although I know there are a few Corey Duffel ones I wanted to scan that I keep seeing while searching for other stuff.

I am not really sure what the Fiberlam board construction was.

The holiday weekend was nice. The snow all melted and we had warm weather most days. I decided to break in a new pair of shoes on Saturday and that went really well. My ollies were popping and my noseslides were nosesliding again. It's kind of strange how a fresh pair of shoes can improve a few minor things. 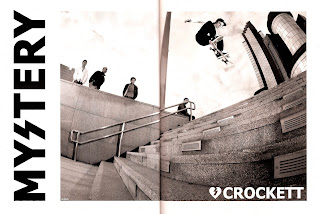 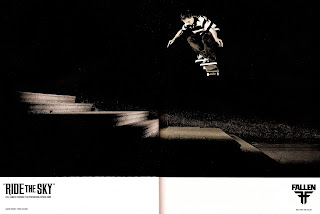 Gilbert put together a part for Quasi that features him driving around in a denim covered automobile. I'm sure it was a project to get all the fabric to stick to the car. I like the aesthetic Quasi has going with their art and videos. They've captured this odd 1990s Midwestern cable access Guided By Voices mood that is really wonderful. Denim Car is one of my favorite parts of the year and I think Gilbert is one of my current favorite skaters. The video feels genuine. 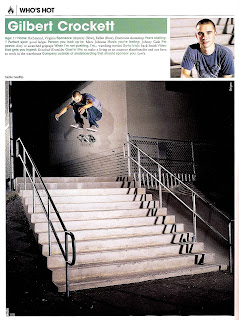 Joey Shigeo took the mysterious photo and Seu Trinh took the falling photo. Joey also took the picture for the Who's Hot. 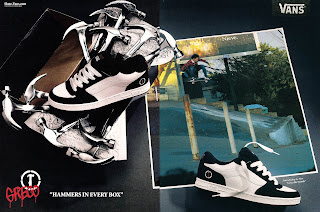 Jim recently released another short film of his skateboarding called The White Wall. It's an LA centric part with a ridiculous backside 360 ollie on a very tight white wall. Jim also cracks a few big ollies and battles the wind trying to get tricks in a parking lot. I can relate to the problems with wind, as it is often breezy around here and it is not fun to deal with.

Two things I've never liked about Vans is how their shoes are constructed and how mid the graphic design looks in the ads. It's great how much they give back to skateboarding on so many levels, but nothing much they do appeals to me beyond the humanitarian efforts. Also everybody wears them. That's not a slight or anything, simply an observation. I saw my friend's band play at a bar two weeks ago. The crowd was mostly college students and nearly everyone was wearing Vans of one type or another. There were maybe a couple pairs of New Balance and I'm sure somebody had Nikes on, but it was Vans all the way. Except for me. I was wearing some Lakais.

Giovanni Reda hammered down the photo.