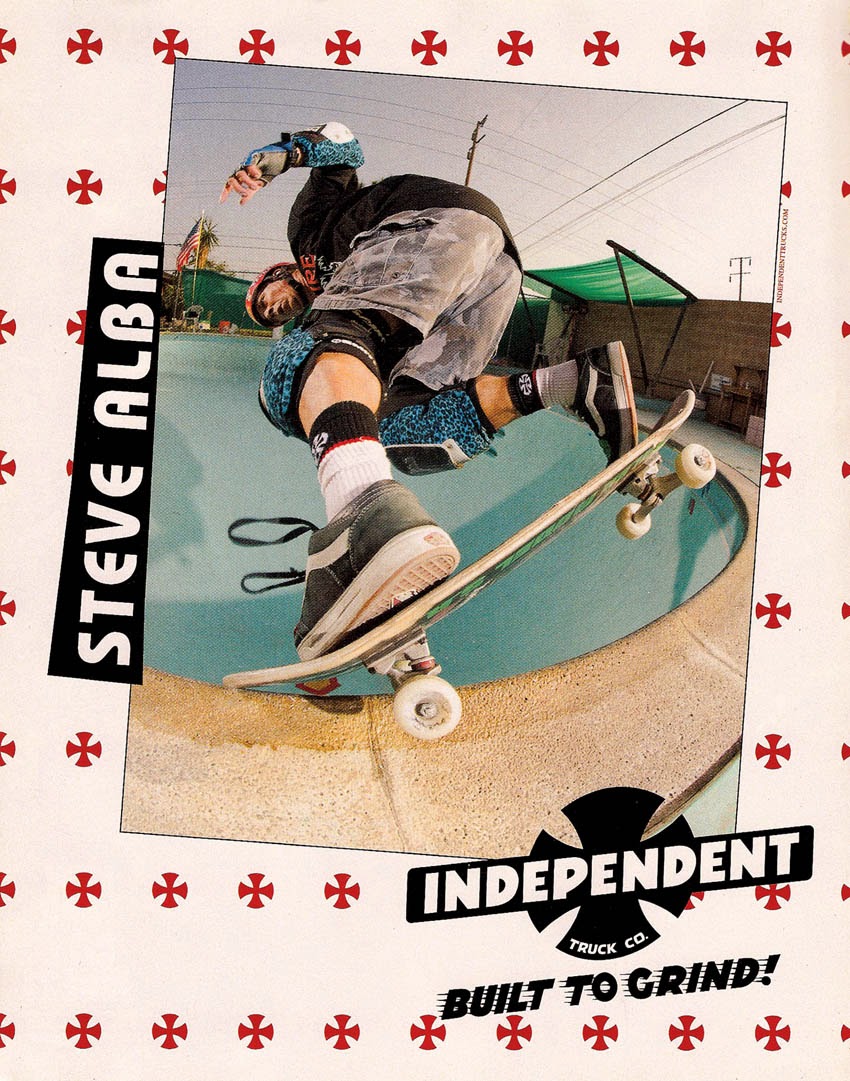 The Screaming Lord in his natural environment. 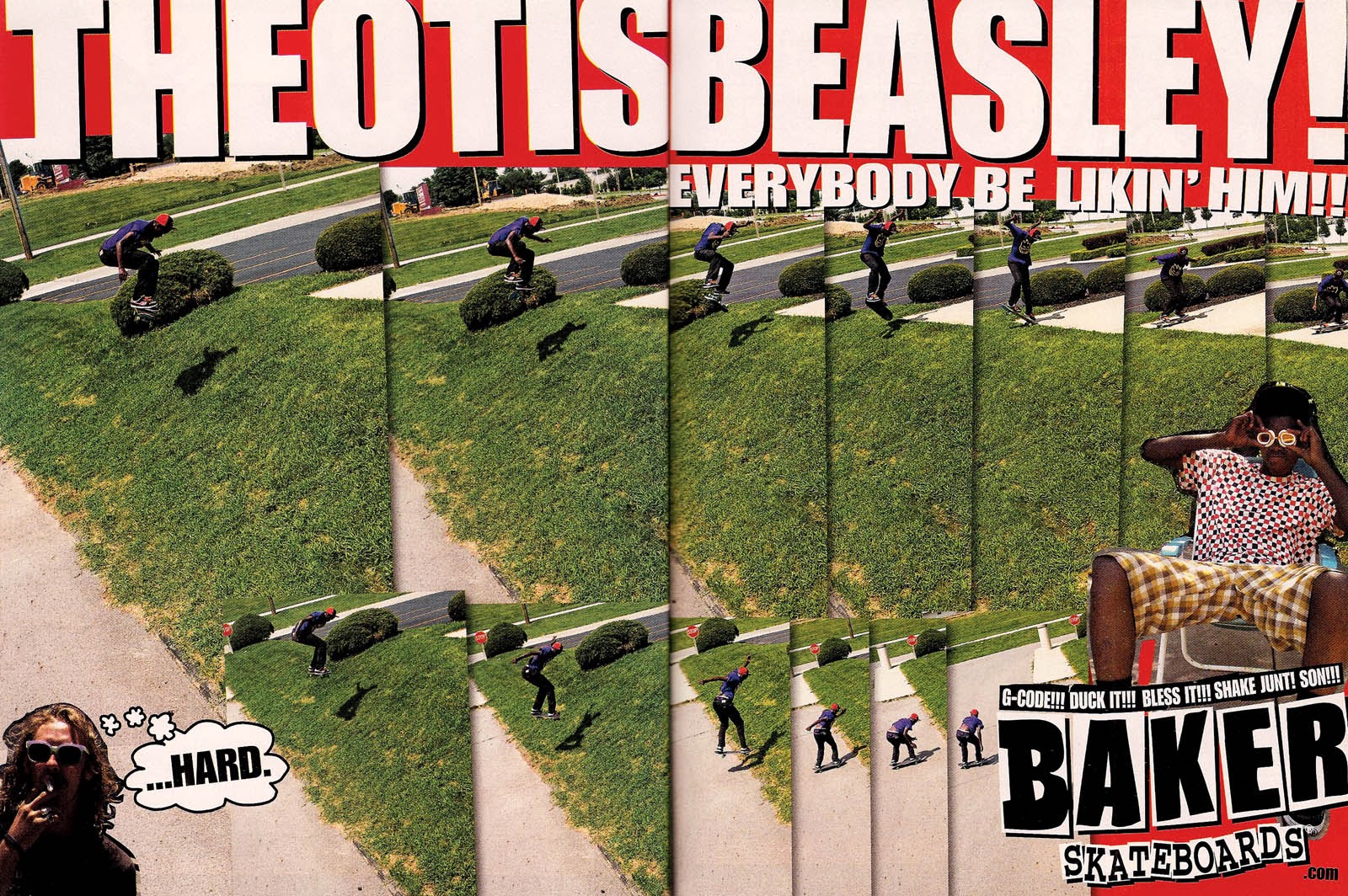 The new kid with all the sponsors.

Theotis is from Los Angeles. He's been on Baker since he was fairly young and turned pro for them. He's also on Nike and had a part in their recent video. Theotis did what has got to be one of the longest manuals ever in Baker's Bake & Destroy vid from 2012. He ended it with a kickflip out, which would have been really annoying if it took more than one try to land.

Coburn Huff has some photos in the new issue of the Skateboard Mag. Gnarkanas represent. 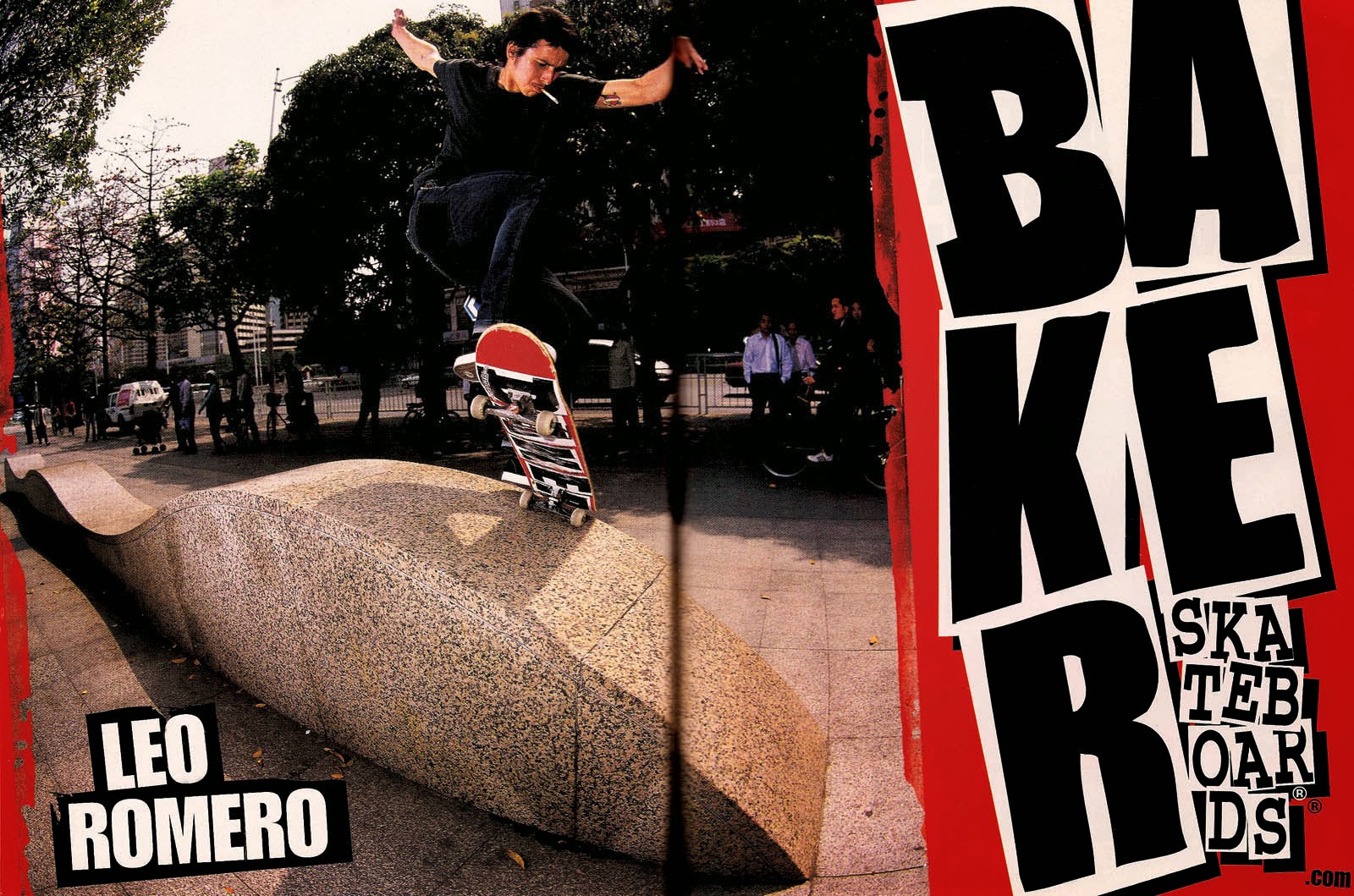 Leo doing a smoking noseblunt-slide during the Baker years. He switched to Toy Machine in 2009. Leo has been on Emerica for his whole time sponsored. In 2010, he felt he didn't do a good enough job for his part in Stay Gold and filmed a second part to end Toy Machine's Brainwash video. Leo was one of the three pros featured in Emerica's recent Made video. He also rides for Eswic clothing. There's a band called Travesura that Leo uses to fill the time between giant ollies and handrail assaults. 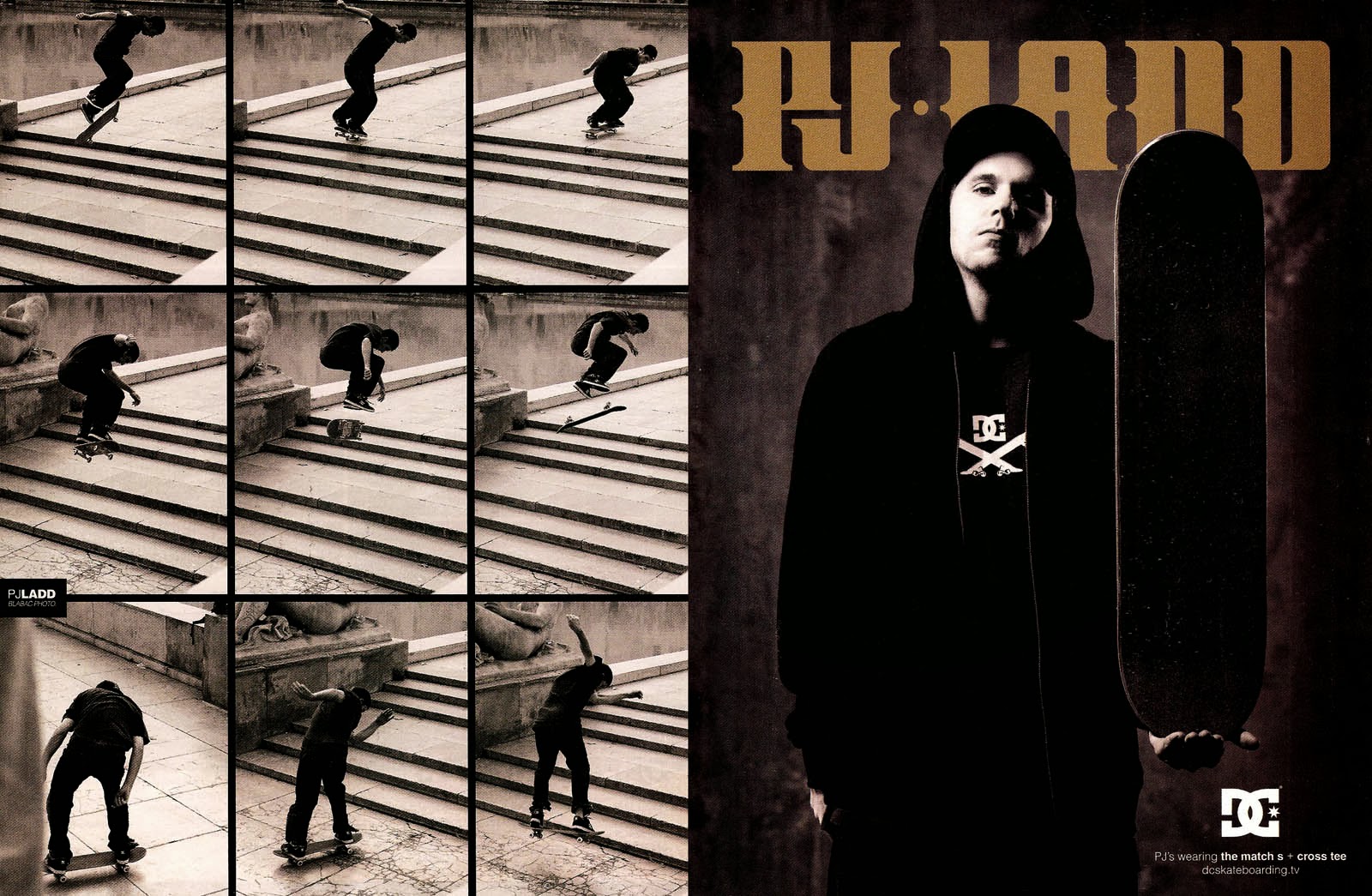 The sequence is by Mike Blabac. 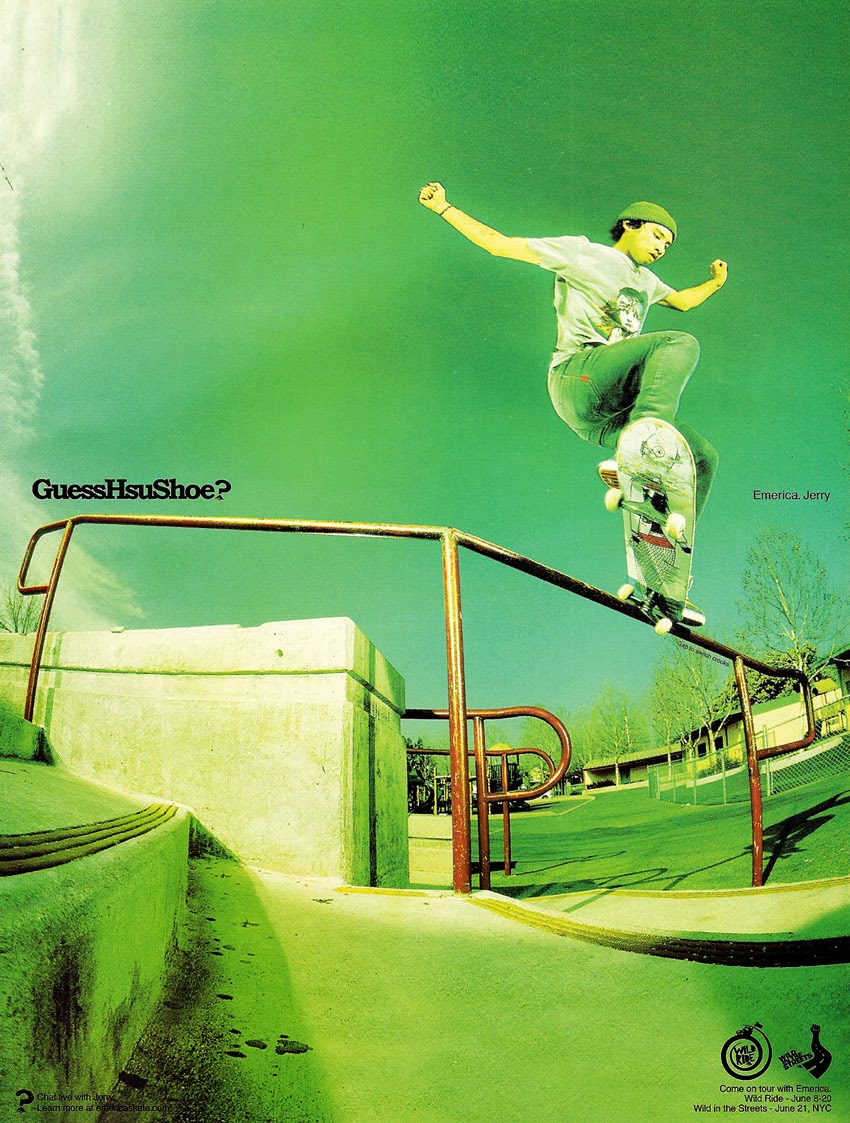 Jerry began as an amateur on Maple and was in the high tech Osiris video The Storm back in the late 1990s. When Marc Johnson started enjoi, Jerry naturally made the switch. He closed out Bag Of Suck with an epic two song part full of tech gnar skating. He had a part in Emerica's Stay Gold from 2010. There were a few Tiltmode video appearances, too. Jerry is famous for taking some of the gnarliest slams ever. The only good that comes from that is free time for artwork, which has resulted in a few shows of his photography. He recently joined the Chocolate family. Be careful out there, Jerry. We want to see another part or two from you. 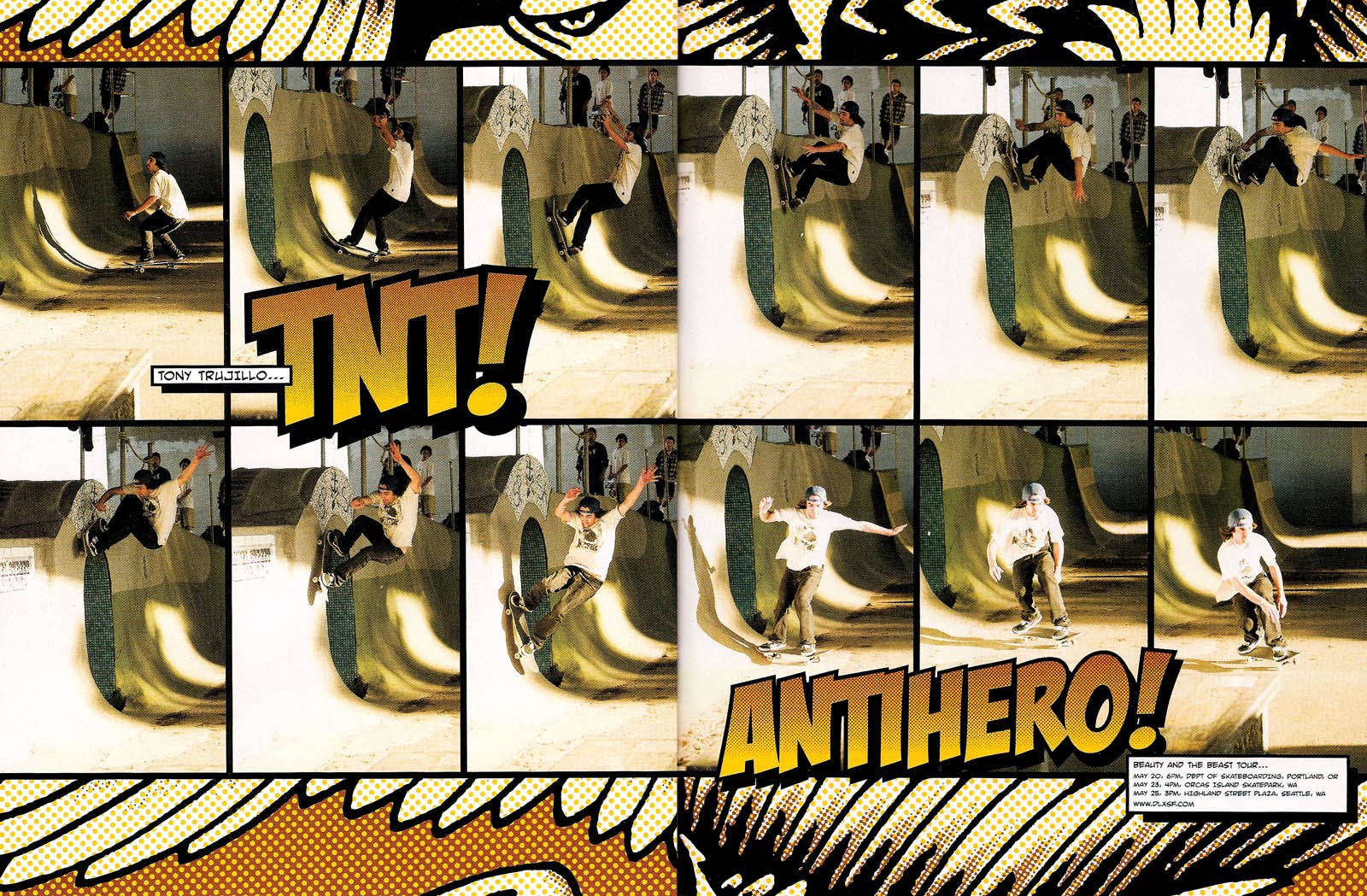 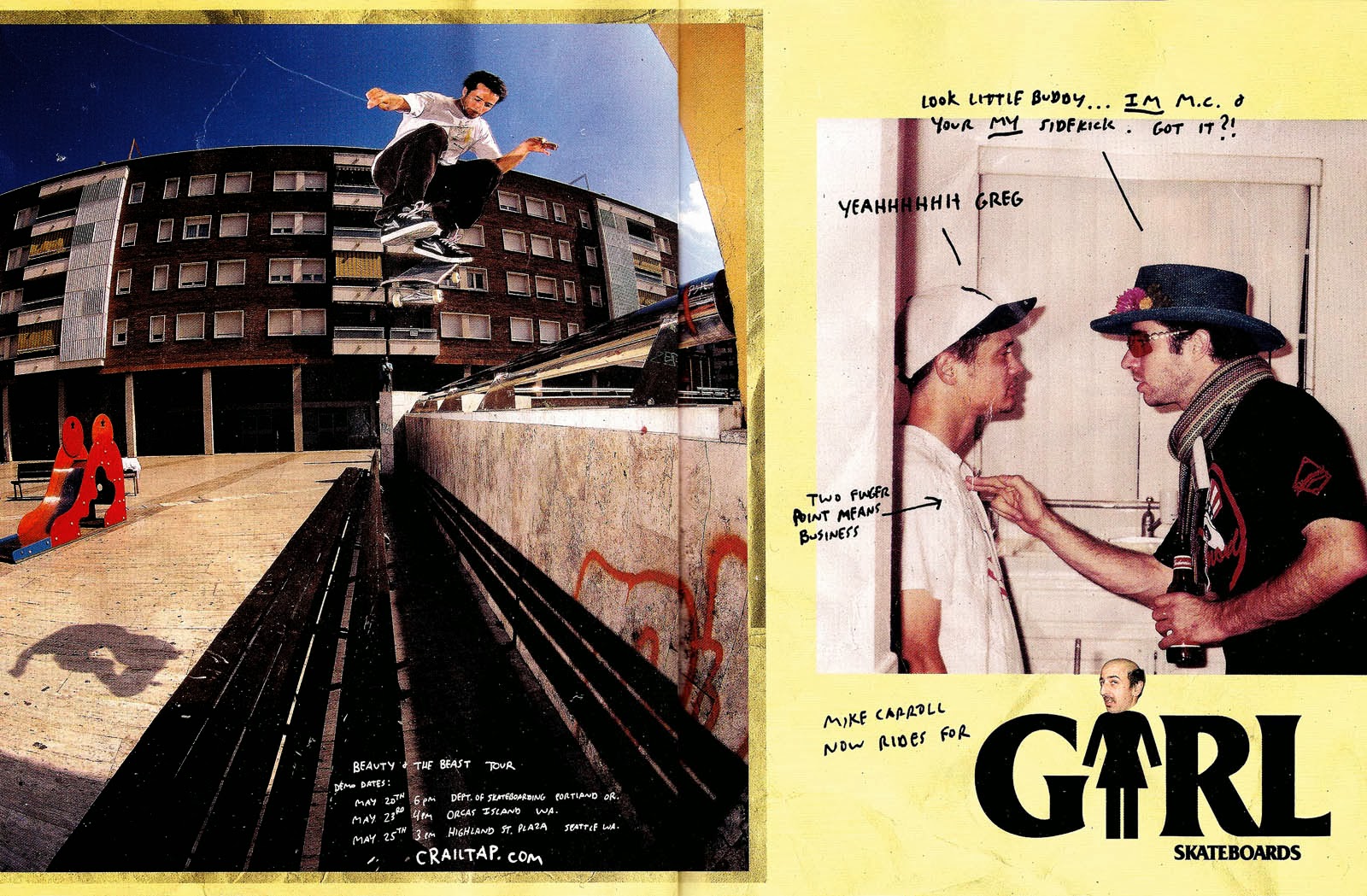 No big babies on this trip.

In 2008, Girl and Anti-Hero teamed up for the Beauty & The Beast tour. The two companies went camping together in the Pacific Northwest for a few days at the end of May. They made a video of the trip which featured multiple edits in both the Girl and Anit-Hero styles. There were a lot of wizard staffs and races around skateparks to go with footage of guys you don't see very often. They also switched up their advertising approaches. The tour featured Frank Gerwer, Peter Hewitt, Eric Koston, John Cardiel, Rick Howard, Julien Stranger, Brian Anderson, Andrew Allen, Sean Malto, Rick McCrank, Tony Trujillo, Mike Carroll, Robbie Russo, Max Schaaf, Tony Miorana, Alex Olson, and more. The trip worked out well enough that they did it again in 2009 and 2010. 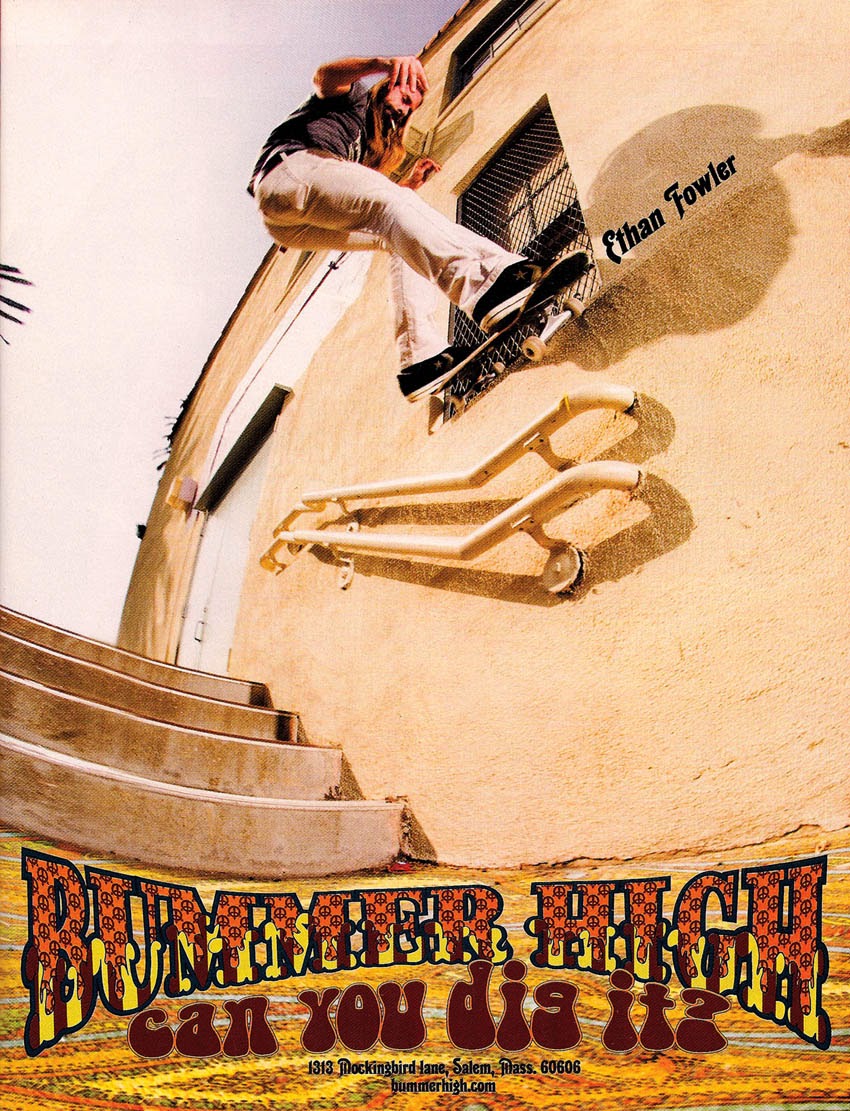 Following a long time on Foundation, Ethan left to start Bummer High in 2008. The High didn't last long and Ethan somewhat vanished afterward. Team riders included Daniel Shimizu, Pat Rakestraw, and Mark Gutterman. Ethan was also riding for Converse and had a split part with Raymond Molinar in Thrasher's Prevent This Tragedy video from 2009. He had been playing in the band Green & Wood, but I'm not sure if he is still doing that. 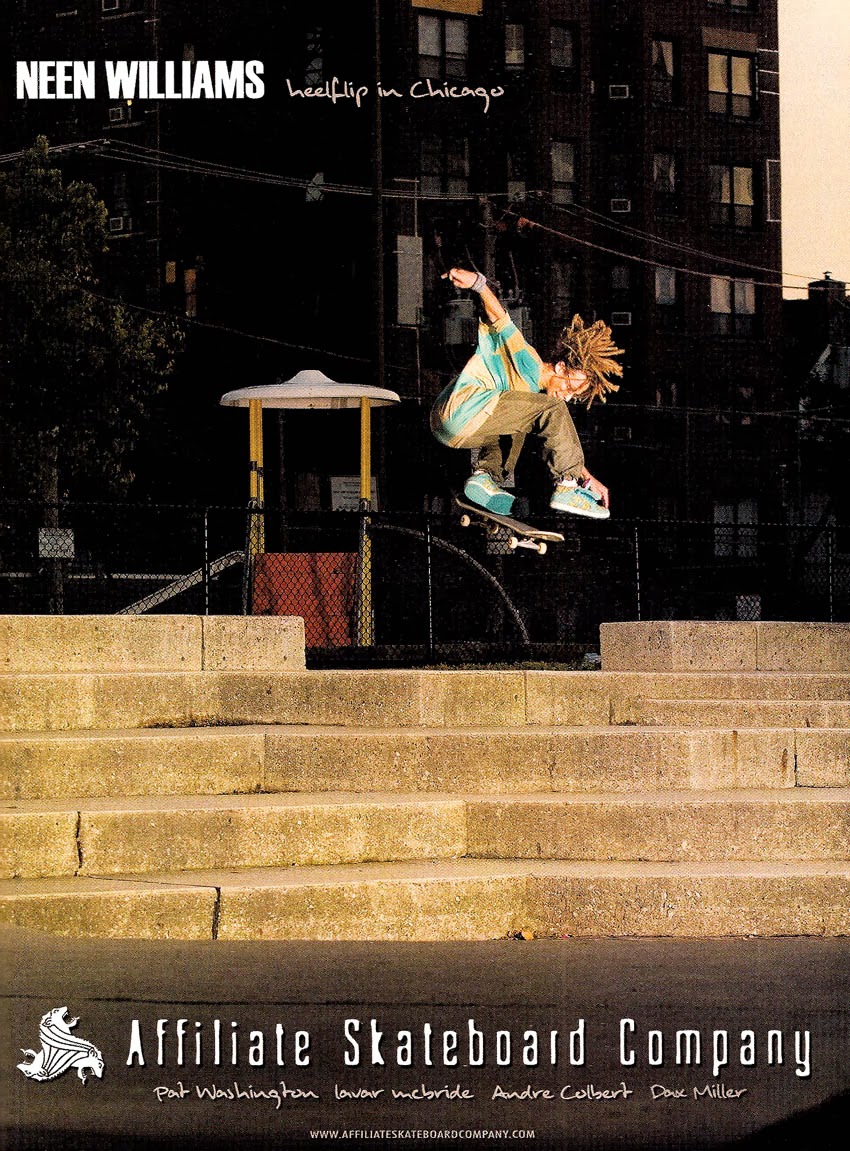 Neen is from Chicago. He rode for Affiliate before joining the Deathwish gang. They turned him pro a couple years ago. He made the switch from Nike to Supra for footwear. Neen had solid parts in the Shake Junt video from 2011 and the Deathwish video from 2013. He's got a crazy karate style for his heelflips and takes the frontside shove-it down some giant drops. There's a stylish backside Smith grind down those handrails, too.

The photo is by Ed Herbold. 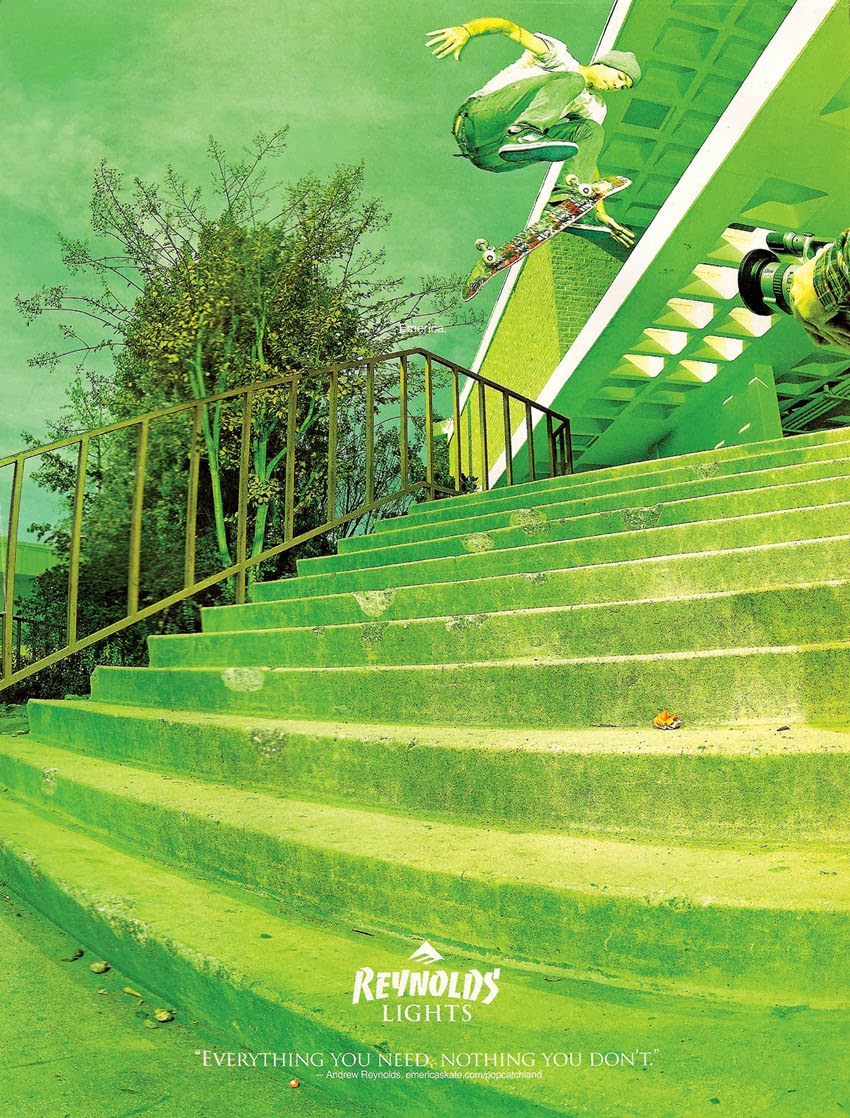 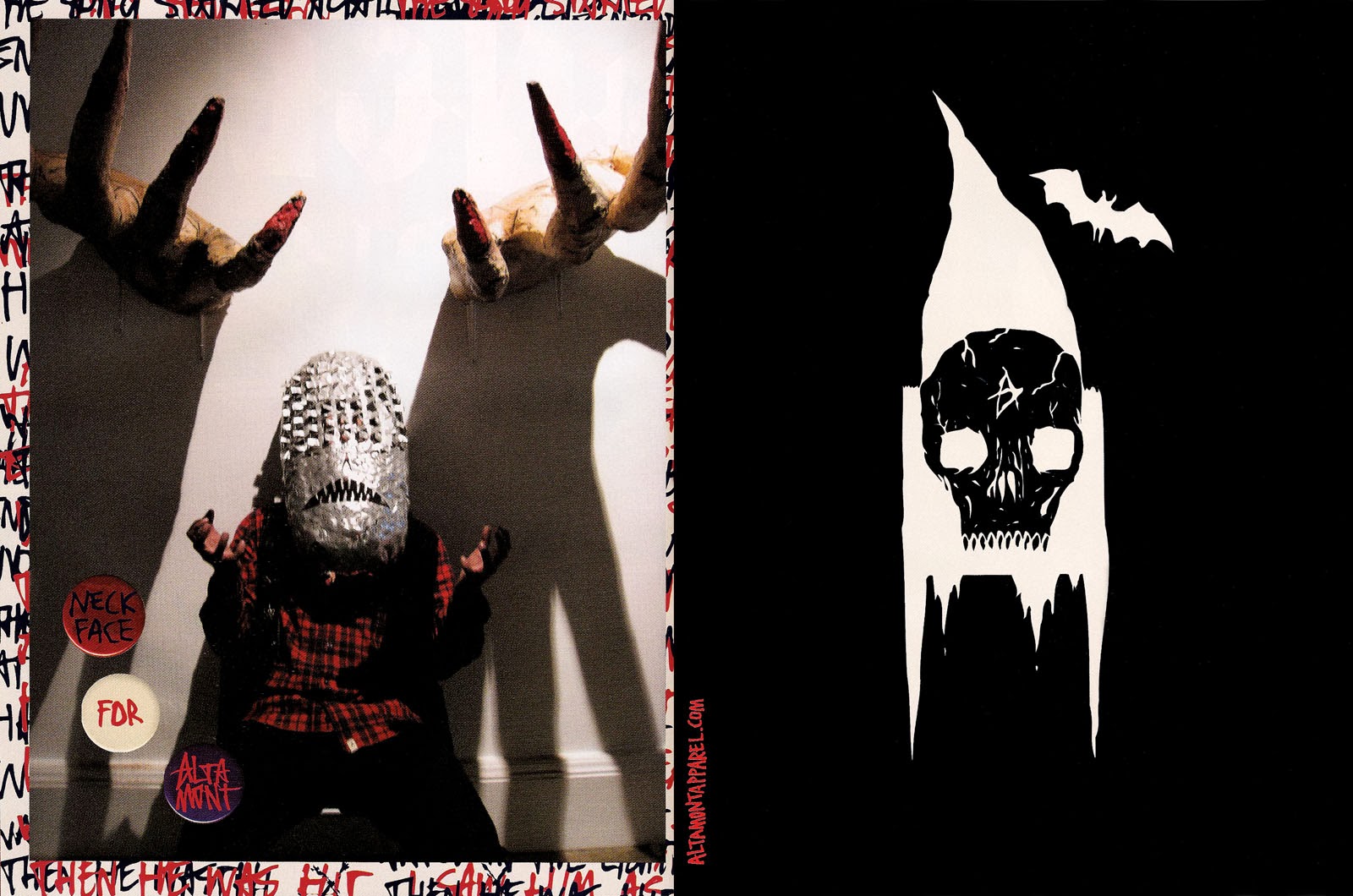 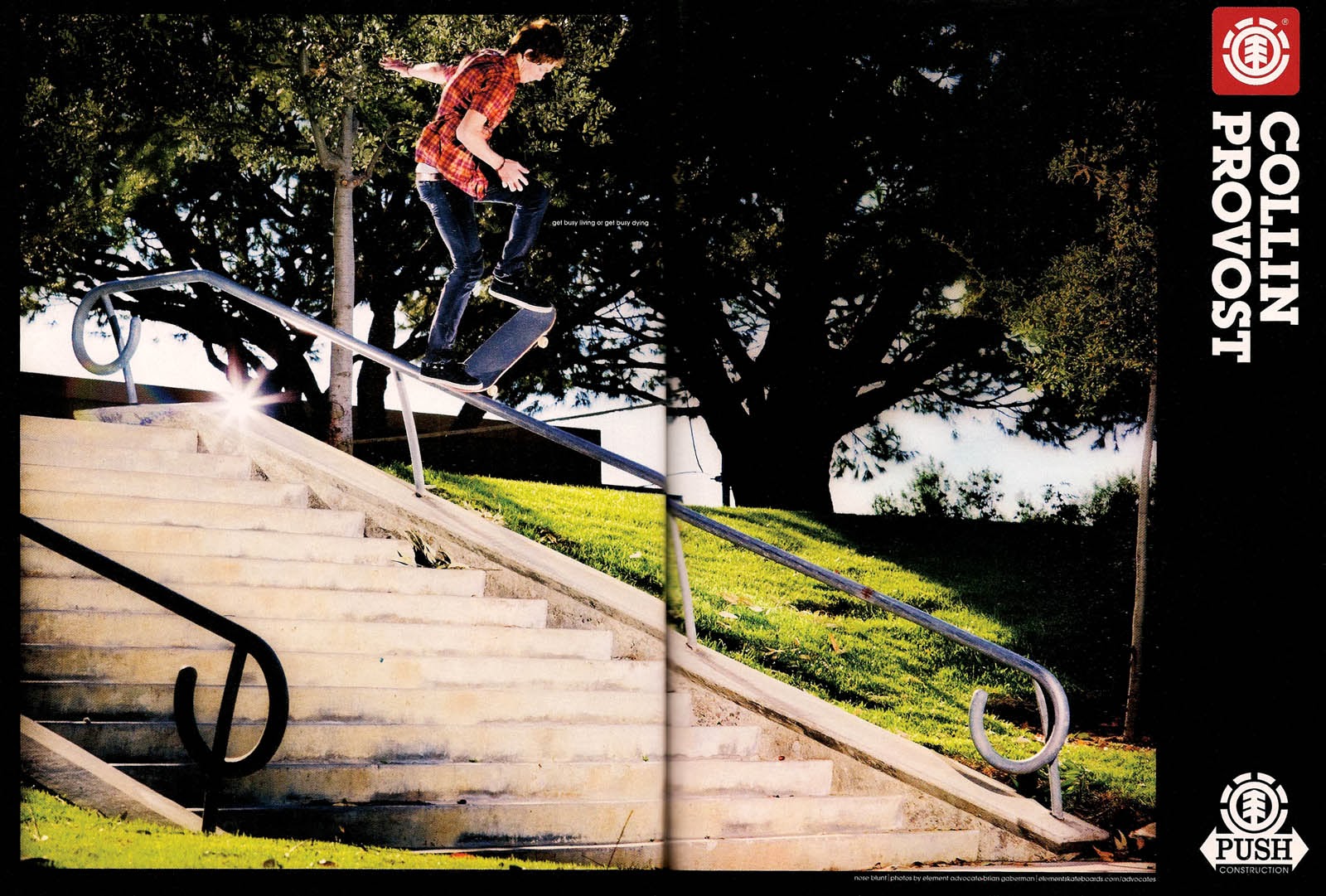 Collin was an amateur for Element before giving up on the planet to join the monster squad at Toy Machine. The Tempster turned him pro a couple years ago. He's had two parts for Emerica, in 2010's Stay Gold and 2013's Made. He was the Vert Is Dead pick for SOTY 2013 based on his part in Made where he blasted a bunch of airs in ditches, ollied a huge handicapped ramp, and did a frontside flip over a gigantic fence. Collin is from Huntington Beach, California. He also rides for Volcom, Active, and Bro Style.

The photo is by Brian Gaberman. 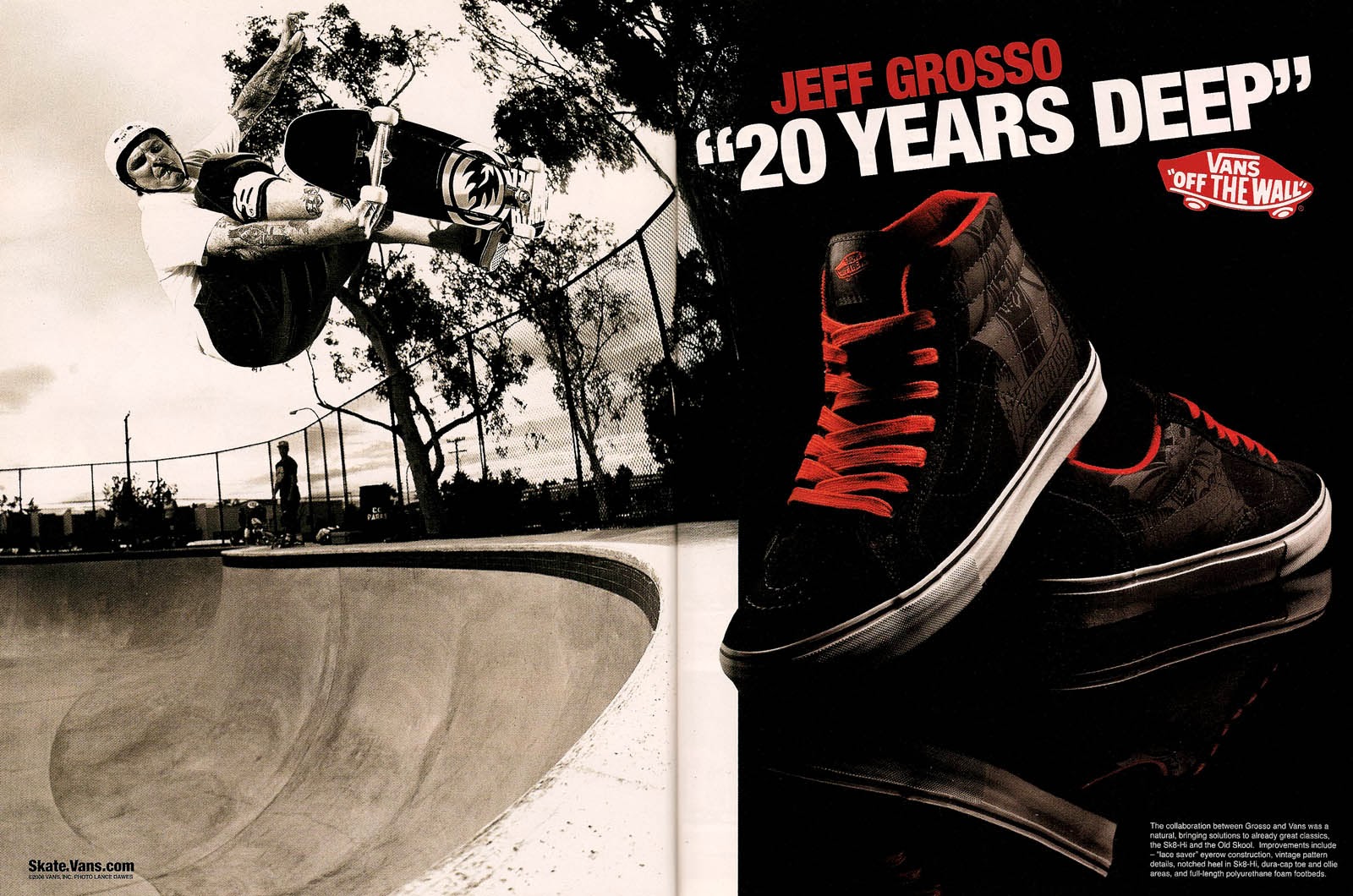 Nothing wrong with cutting and pasting your head on Julien Stranger's body.

The all black boards Jeff was riding around this time look cool. It's also cool how he keeps up with the current skateboarding, like his support of Mark Suciu for Thrasher's SOTY 2013 for example. 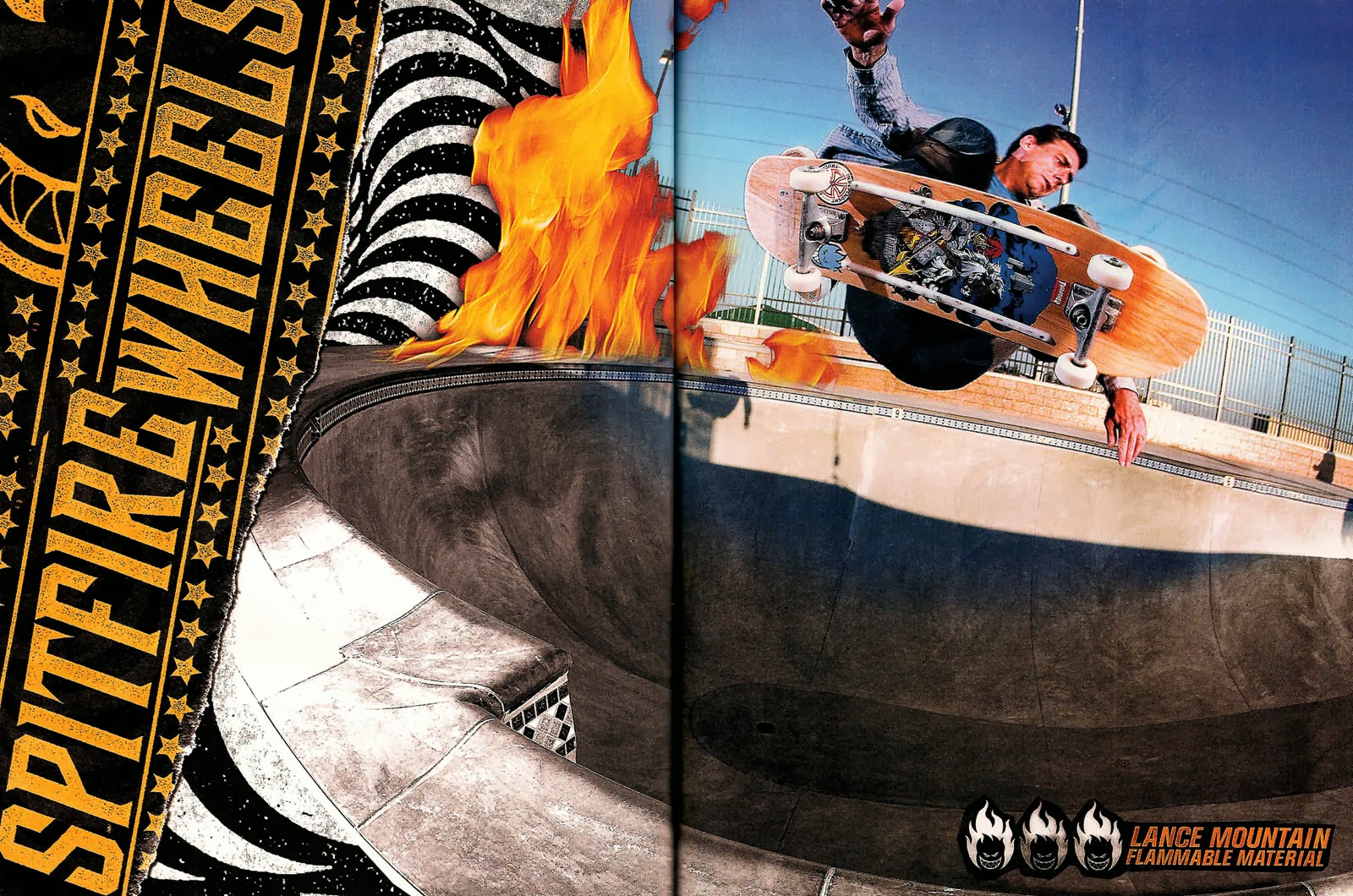 I added a bunch of links for companies that support girls skateboarding. This includes Meow, Hoopla, Rogue, Silly Girl, and the Girls Skate Network. Meow is by Lacey Baker, Amy Caron, and Vanessa Torres. Cara-Beth Burnside and Mimi Knoop are making Hoopla Skateboards. Cara-Beth has been involved in skateboarding for a long time and had a Thrasher cover back in 1989. 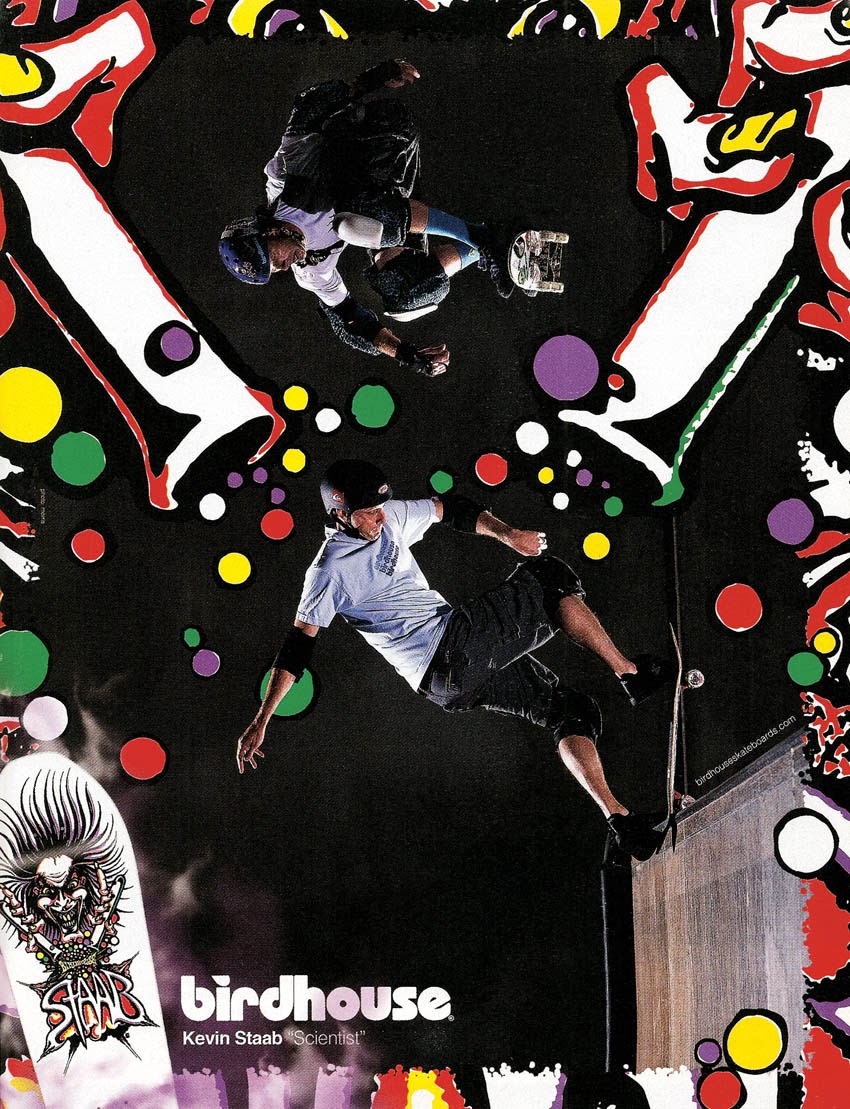 You can't go wrong with a good backside ollie.

It's going to be 2008 for the next couple weeks. I picked out a variety of new faces to go with older heads that have kept it rolling all along.

Kevin was pro for Sims back in the 1980s. He had a couple different companies in the 1990s, like Shine and 90. He also floated around in the vert no man's land for a while before landing on Kris Markovich's Hollywood. That didn't last too long and soon he was picked up by Tony for Birdhouse. He still rides for them today as well as working for the company. Kevin invented a few tricks over the years, including the ollie blunt and fakie ollie.

Tony is another guy who keeps on going. He just scored a Gest Board on Krooked and dropped a new part of 80s inspired trickery.

The photo is by Jody Morris. 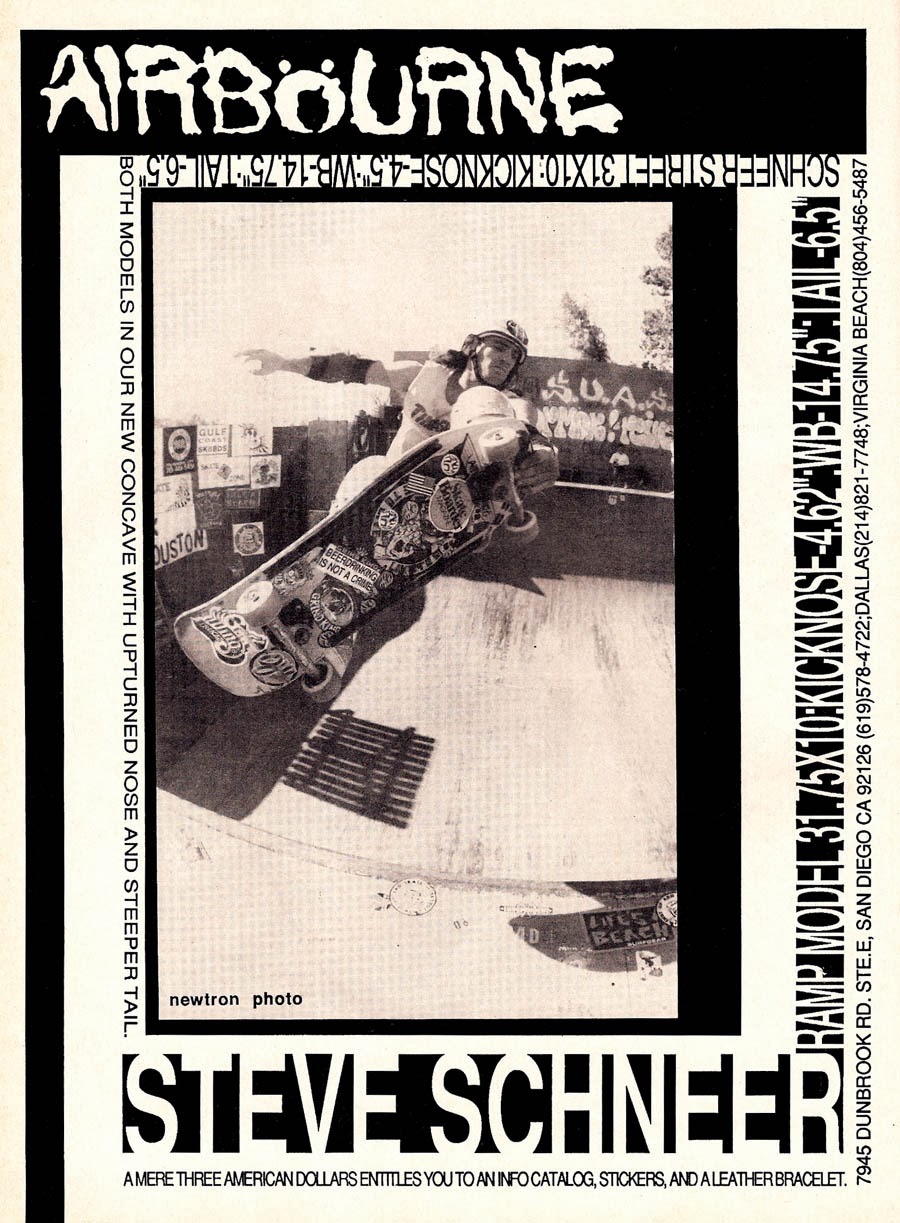 Skateboarding lost another vert soldier this past week. Steve was a pro during the 1980s and 1990s who invented a lot of handplant variations, most notably the Ho - Ho, which involved a two handed handstand on the coping while the board balanced on his feet. He was also known for crazy stunts, like trying to wallride around the corner of the ramp behind him, dropping in off a ladder, and the occasional naked run. Ride in paradise.

It's a Jeff Newton photo, perhaps? 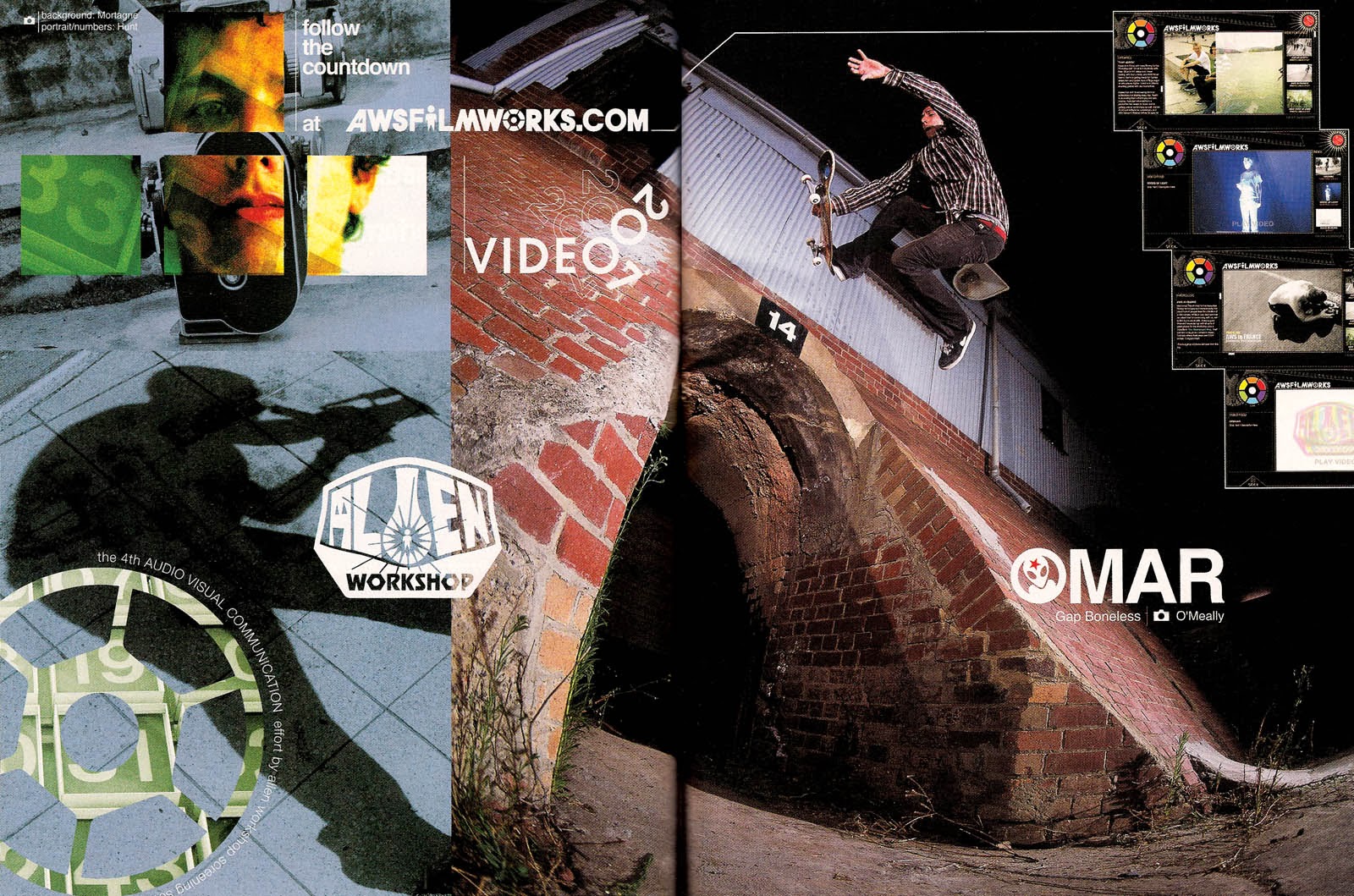 Grinding upside down in a full pipe & hippie jumps of death.

Omar basically just goes for broke at full speed with his own style and trick selection. He's from San Jose and grew up in Sacramento. He was sponsored by Foundation and Rasa Libre before being abducted to the Alien Workshop. Omar also rides for Nike. He had the opening part in the Mindfield video from 2009. J. Mascis had a cameo and laid down the tunes.

I'll be moving along to 2008 starting on Monday. The grand plan is to cover four weeks of the zero eight and then do four weeks of 2009. After that I think I'll be going back to the one or two weeks on a single company from a given time frame. Those are easier put together over randomly browsing a year. Plus I hate scanning two page spreads.

Mike O'Meally took the boneless photo. The other photos are by Greg Hunt and Fred Mortagne. 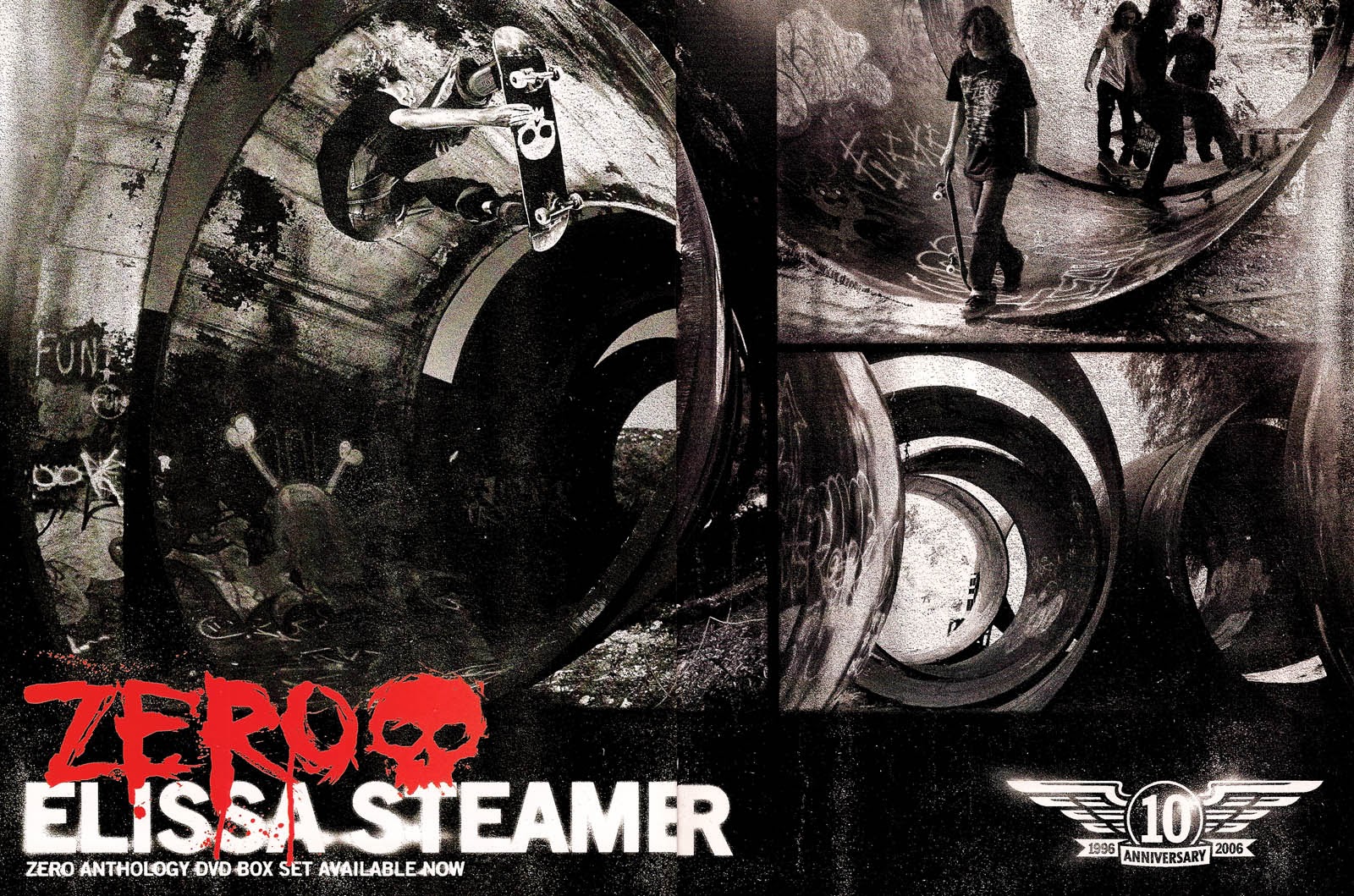 Elissa is from Fort Meyers, Florida. She was one of the first women to be sponsored for street skateboarding at a level on par with the guys when she earned a spot on Toy Machine in the mid 1990s. Elissa had parts in Welcome To Hell and Jump Off A Building. She switched to Baker offshoot Bootleg in the early 2000s and then rode for Zero up until 2011. Elissa had a quick part in Zero's Strange World video from 2009. It looks like she is doing a clothing company called Gnarhunters these days.

Off the top of my head, I can't think of any companies that are sponsoring a girl right now. I know there is a women's contest circuit, but that doesn't get much coverage. It's not like the early 2000s when companies like Rookie existed and a few teams had at least one lady as an amateur who they occasionally featured in an ad. I'm assuming that girls still skateboard and that some of them are good enough to warrant a real sponsorship. The progress made by Elissa, Jaime Reyes, Jessie Van Roechoudt, Lauren Mollica, Marisa Dal Santo, and Alexis Sablone wasn't for nothing, right? All you industry dudes need to step up and add a little variety to the sausage party. 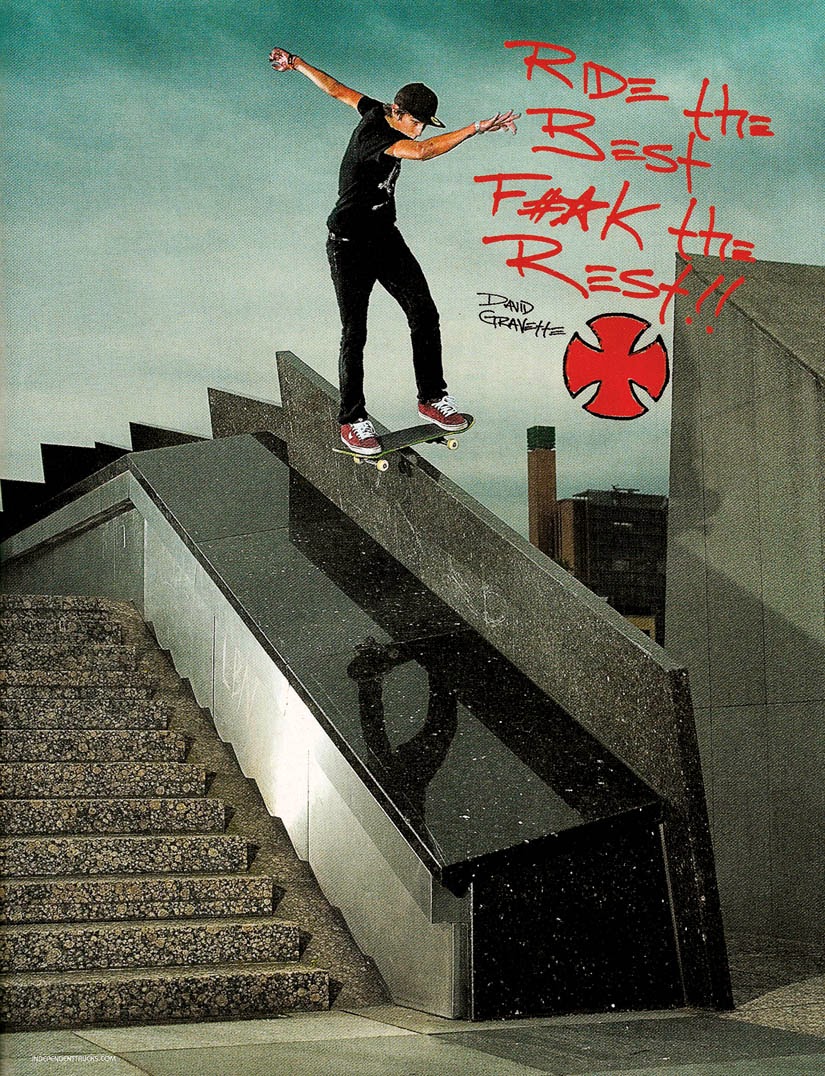 David is from Seattle, Washington and lives in Portland, Oregon. He's pretty much always ridden for Creature. He also rides for Indy, Bones Wheels, and Circa. David does a lot of 50-50s down giant handrails and looks way too relaxed doing so. He's got transition skills as well and isn't afraid to huck a backflip. During one of the King of the Road contests, David did the sensible thing of shaving his eyebrows to get Thrasher and King of the Road tattooed on his face. Points is points. 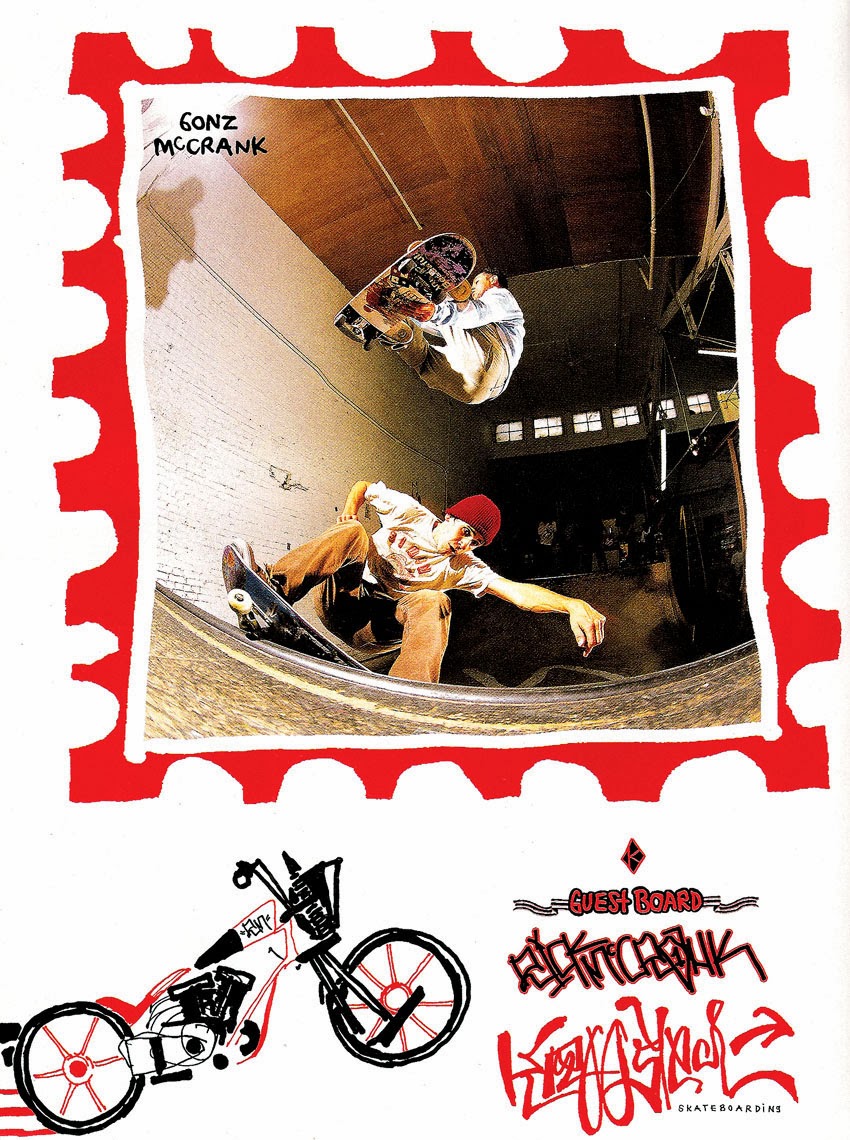 Gonz gets stale over a slashing Crankers.

Roger is going to be making a new batch of Ghost With A Boner and Weed & Cobras decks. I think it is hilarious that the band Diarrhea Planet has a song inspired by the Ghost With A Boner deck. It's actually a really good song, too. 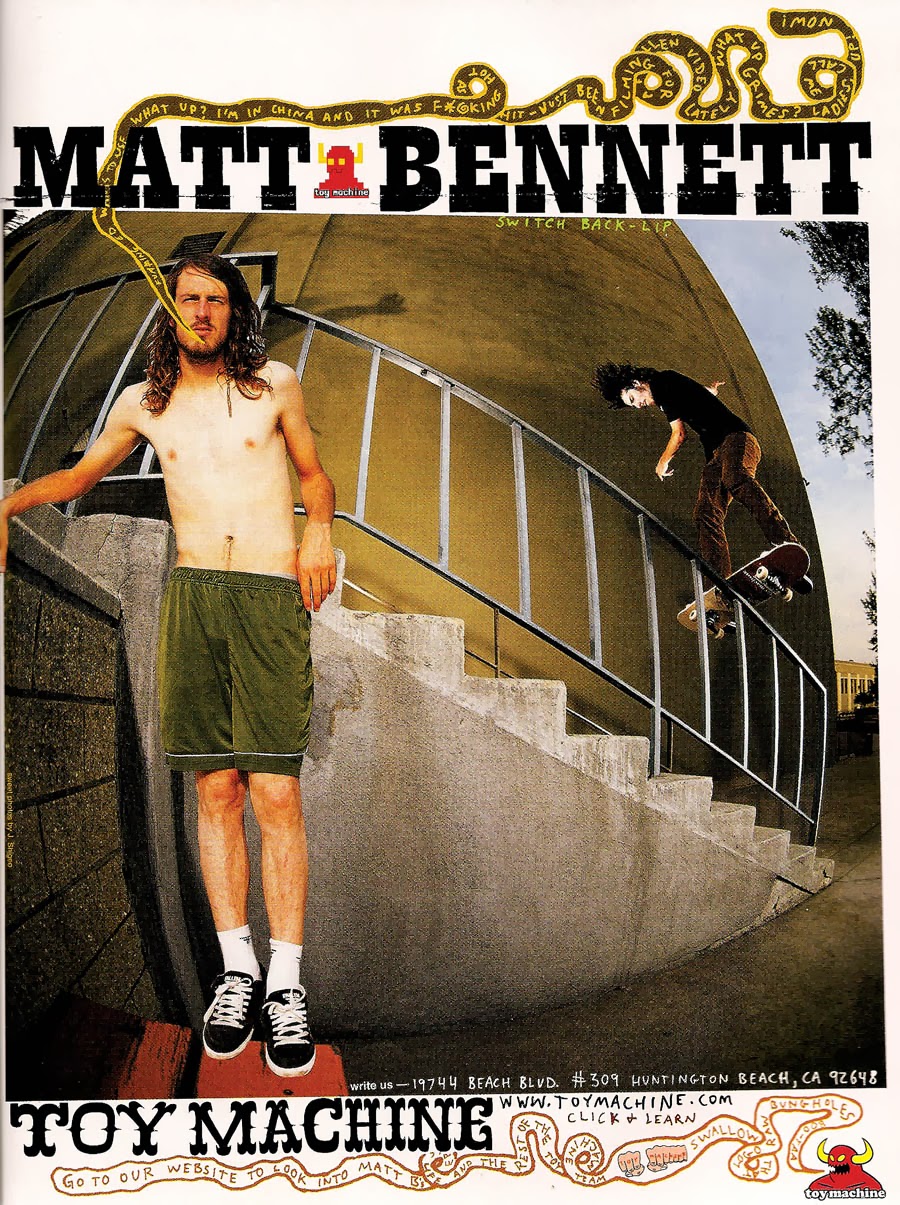 Matt is from Fullerton, California. He rides for Toy Machine, Dekline, Pig Wheels, Ambig Clothing, Bro Style, and Neff. He recently was added to the Silver trucks team. Matt is credited with inventing a variation on Donny Barley's Barley Grind. The trick is a 180 to switch backside Smith grind, which has been dubbed the Bennett grind. Matt's got a relaxed style that is easy to watch. I'm a fan.

The photos are by Joey Shigeo.