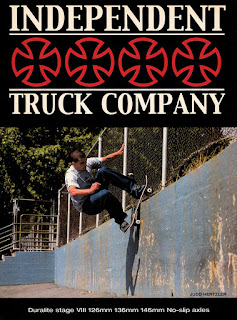 Judd's part in Art Bars kicks off with him slamming on a handrail attempt when the rail won't grind. He does skateboard tricks on a variety of railings and ledges. There are boardslides, noseslides, 50-50s, 5-0s, nosegrinds, and backside tailslides. Judd also lands a frontside pivot in a pool and does a big wall ride at a skatepark. 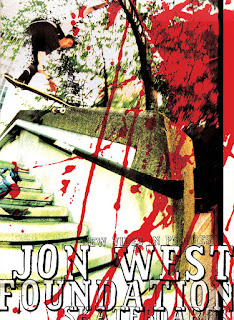 For Art Bars, Jon put together a part that had a lot of rails and gaps. Dumpsters got skated and roofs were jumped off. There are a fair amount of flip tricks. There are also frontside feebles and a pair of frontside Smith grinds around a curved round bar. One of the Smith grinds has a footplant out and the other doesn't. His last few tricks are impressive. He does a hurricane to fakie down a handrail and then a 180 nosegrind to forward on another rail. Jon sticks a frontside boardslide through the skate stoppers on a railing. His final trick is the frontside noseslide from this ad. 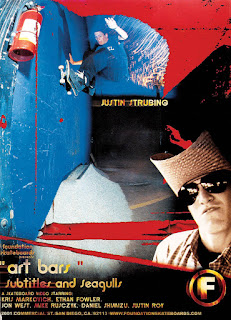 Flip off a mattress.

Justin's part is full of high speed lines and large ollies. There are many bluntslides and tailslides on all types of terrain, done both frontside and backside. He even does a drop in off the top of sign into a big bank. He throws down long crooked grinds and kickflip backside tailslides, plus a backside 5-0 the full length of that three stair spot in San Francisco. Justin busts out a couple of big airs over hips, too. He straight up rips. 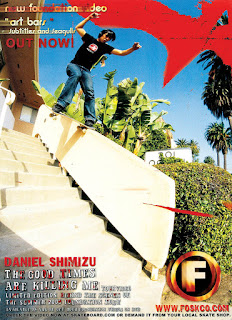 For the next two weeks, it is going to be a look back at Foundation's 2001 video, Art Bars, Subtitles and Seagulls. The F Troop was putting out vids on a regular basis back then at the pace of one every year or two. Art Bars does have an arty vibe to it, but it remains primarily a skateboard video without the art getting much in the way. The soundtrack sticks to the indie and punk rock one would expect. The team is stacked and includes Ethan Fowler and Kris Markovich, two of the best and both in their prime. I like this era of Foundation.

Daniel opens up Art Bars. He skates to the smooth sounds of The Make-Up. His part is filmed in San Diego, San Francisco, New York, and a few other places. He's not overly technical and doesn't do a ton of flip tricks, but there are a few sprinkled in the section. He mostly skates rails, ledges, and banisters with a mix of Smith grinds, lipslides, tailslides, blunts, and hurricanes. His last trick is a frontside feeble grind down a handrail with a wind blown plastic bag drifting by in the foreground. Daniel was an amateur and would soon turn pro after the video was released. 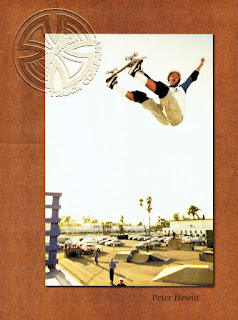 Good times in the air high above the YMCA.

Vert Is Dead will be back on Tuesday, May 28th. We're going to the art bar. Have a good weekend. 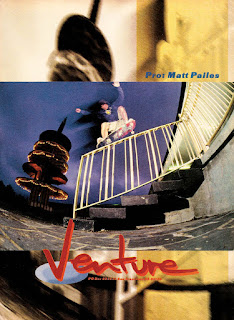 "I like to play the drums, a little bit of guitar, some flute, whatever. I like to just fool around with music - I'm not super advanced. I like to get into rhythms, get into the flow. I like drumming a lot, because you get yourself really amped up, and at the same time you let a lot of good sounds out into the air."

I feel like Matt was a little bit under the radar in the mid 90s because he was skating handrails, big stairs, and gaps on par with anybody else who was trying out for the Zero team. 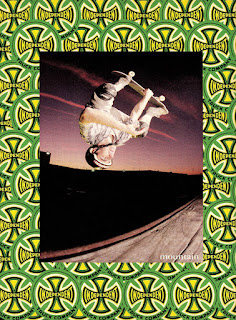 Lance gets inverted. It's cool that the younger generations have brought back inverts and are doing them properly. I don't remotely have the coordination to attempt such a thing, but it's enjoyable to watch.

This color scheme reminds me of the Oakland Athletics. 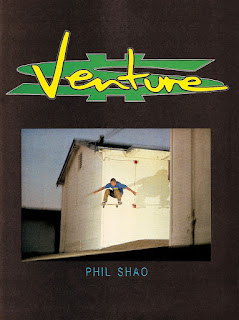 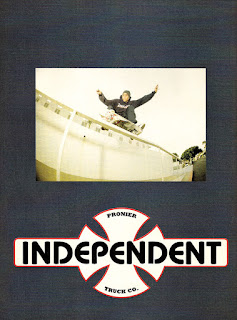 Huntington Beach local and long time Black Label rider Skip Pronier grinds a handrail. I always sort of think that any ad for trucks should feature a grind. 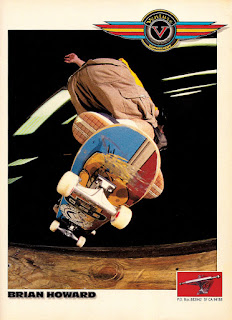 This is a unique view of a backside disaster. The photo really shows off the truck. Ventures were kind of on the gnarly side in the late 1990s. They were thicker than they are today.

Noted architect I.M. Pei passed away yesterday. He was 102. Pei designed a few of the buildings at the college here so it's cool that I got to skateboard on some of work. 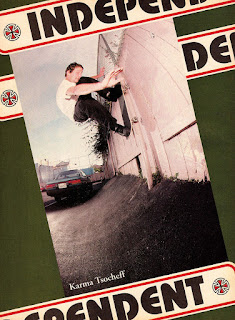 "White man's blues, stuff like Sebadoh, Pavement, The Velvet Underground, Neil Young - people who are singing about the down and dark side of things. People who're singing about experiences."

Karma rattles off his music selections for 1994. He digs No Means No and dabbles with playing the guitar, too. 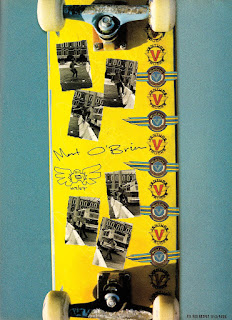 Mat takes a wallie backside over a Jersey barrier. He created the angel logo for Slap Magazine, seen here in an early form. I've still got a pack of the stickers and put one a board recently. 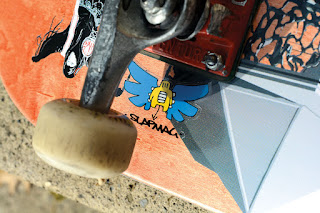 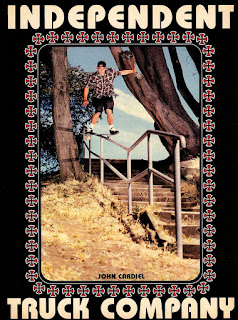 This is the rail that took Cards out on a boardslide attempt. It was in Anti-Hero's untitled video from 1998. Due to the perspective in the photo you don't get the full sense of how much real estate this beast of a handrail covers. Jack Fardell stepped up and made a frontside 50-50 on it in 2015. 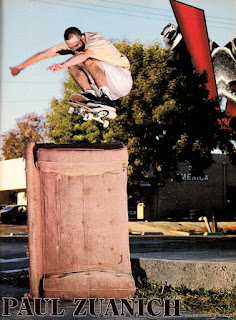 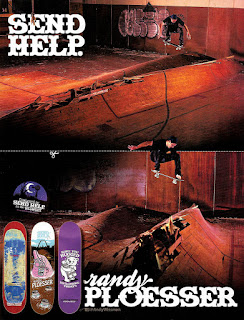 Randy's first pro model had a graphic of his used and abused first skateboard on it. The board was a Tony Hawk deck from Birdhouse.

The photos are by Andy Wissman. 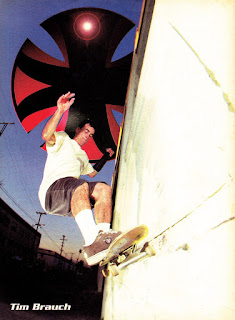 Two decades is a long time.

Tim was from San Jose, California. He was pro for Santa Cruz. Some of his previous sponsors included the New Deal and SMA. Etnies hooked him up with shoes. He ran a clothing called Este with Salman Agah. Tim was a complete ripper on the streets, ramps, and parks with a couple of contest victories thrown in for good measure. Sadly, he passed away twenty years ago today due to a heart condition. BMC forever. 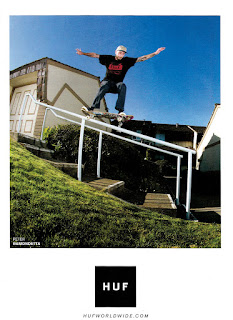 Pete retired from the pro ranks somewhat recently and Huf announced that they will stop making footwear to focus on clothing. It sucks that we are headed towards the only choices for skateboard shoes being Nike and Adidas. I'm going to keep supporting Lakai and éS for as long as they both last. 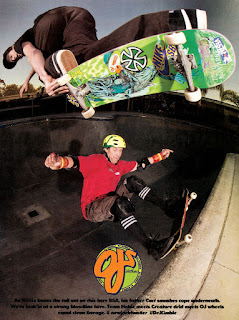 The ol' two for Tuesday.

Willis is pro for Creature and Curt was pro for Bad Company back in the 1970s. According to Steve Alba, the senior Kimbel was one of the inventors of knee sliding on ramps to save your body instead of slamming. The junior Kimbel is an all around ripper who is fond of riding assorted shaped and vintage boards, in addition to the traditional popsicle decks. 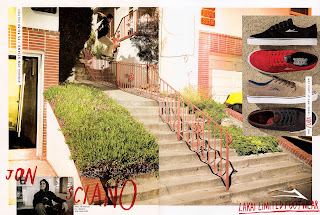 I'm not all that sure what this guy is up to. He seems to have taken a break from the realm of being a sponsored skateboarder, which is totally fine. He was on Anti-Hero and Lakai. I hope he is doing well.

I wrote a letter into the Men's Journal last month saying that I didn't want any issues of their magazine to fill out my expired Transworld subscription. I got a refund check for eight bucks on Saturday. Go me.

The photograph is by Atiba Jefferson. 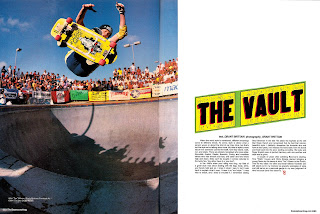 I like it when magazines dig up something from the past to rerun. Somehow it's not quite the same with the internet.

Grant Brittain took the photo and wrote the words. 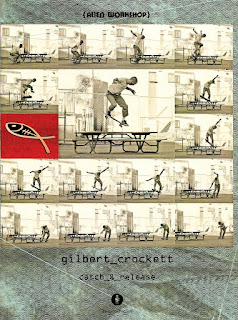 The spider from Richmond.

The photo is by Jared Sherbert. 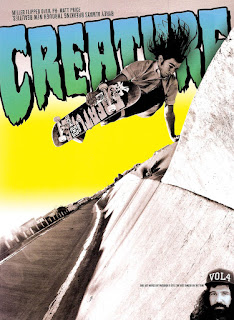