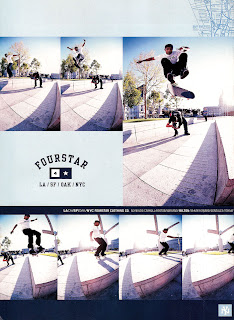 The only New Yorker on the team puts down a smooth switch inward heelflip in SF.

I have to give some props to the guys who do the Skim The Fat website. I have no idea if they read this or if they will ever update their site again, but it is a very useful tool to have for tracking down bits of skateboarding history. 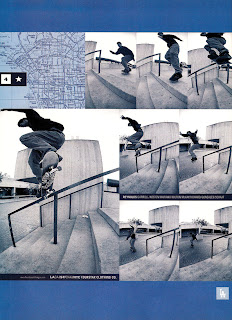 I had a change of plans and figured I'd just finish the week out with Fourstar for today and tomorrow. Maybe I'll even get a shout out on Crailtap. 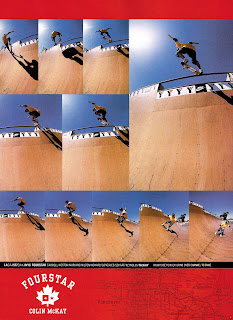 After watching Alex Perelson's part in Since Day One a few times, I've been on a Colin kick. There are some definite similarities between the lip tricks that Alex does and what Colin did way back in Questionable. One video reminds me of the other. I need to watch the Chocolate Tour again sometime soon.

For some more older school vert, check out the Chromeball Incident today for Joe Lopes. Classic. 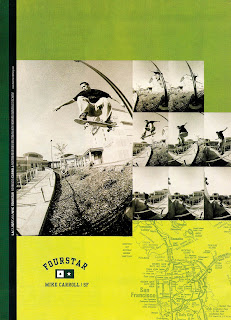 I've been feeling the old Fourstar ads from underneath a pile of day job work. Expect another one tomorrow. 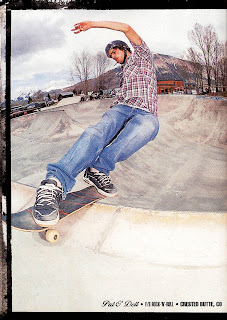 I said on Thursday that the next post would be epic. Sorry if you were expecting Andy Roy, Dustin Dollin or somebody along those lines.

Pat used to be a staff writer and photographer for Thrasher. He has since moved onto documenting important figures in skateboard history for Vice Magazine with his great Epicly Later'd series. He also directs the occasional music video. 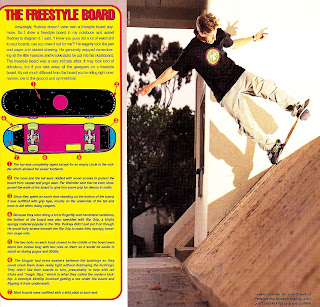 Dave and Rodney break down the anatomy of a freestyle board.

Freestyle boards were usually 7 to 7.5 inches wide and about 28 inches long, if memory serves me correctly. They were very flat with minimal kick in the tail and none in the nose. Nose and tail were roughly equal in length.

One thing they didn't mention was wheel size. Freestyle wheels were usually about 55 mm. This was considered smaller than what was normally thought of as a street wheel at the time, which would have been in the 58 to 62 mm range. A few forward thinking street skaters started riding freestyle wheels in the early 1990s to facilitate more technical tricks.

I've just been picking random things out from Big Brother that were skateboard related for the week. I maybe should have done a week of product reviews, where Carnie's creative writing really shined.

I'm taking tomorrow off from work so there might not be a Friday post. Or there might be. Either way Monday or Friday will be epic. 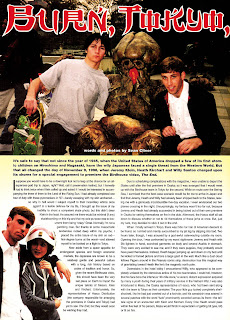 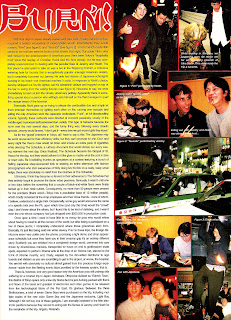 Cliver survives a trip to Japan with Jeremy Klein and Heath Kirchart.

The number of the beast is happening at the Chromeball Incident today. I had thought of doing something for my 666th post, but lost count along the way and never came up with anything. Looks like I blew it for 900 by using Hawk's famous spin last week. 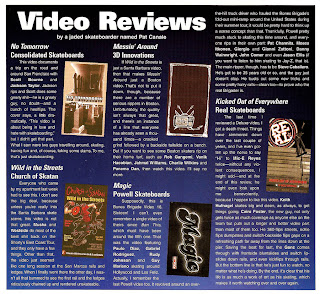 One of the many things that Big Brother gave us was the jaded video reviews of a Mr. Pat Canale. If something was good he would say so and if something wasn't good, he would say so as well. It's sort of like the internet is today, except Canale manned up and used his real name instead of hiding behind an anonymous tag. Cylde Singleton also deserves credit for keeping video reviews real. This was often a point of contention that Big Brother had with Transworld, as many of their video reviews tended to be way too positive for middle of the road skate flicks. 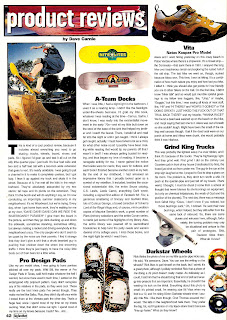 When I've been going through magazines looking for stuff to scan, I never find much I feel like using in Big Brother. I want to use things from Big Brother, but nothing ever looks good. Then it occurred to me that what set the magazine apart from the others was the quality of the writing. You looked forward each month to reading about what zany antics the crew had been up to. This product review is a perfect example of that.

Is that Earl Parker behind the product reviews header? 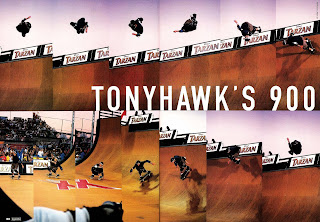 Remember the night when skateboarding made ESPN's SportsCenter?

Tony landed the first 900 after trying the trick off and on for a decade at the 1999 X-Games. It should be noted that Danny Way almost made one in the Santa Cruz Speed Wheels video Risk It from 1990.

I miss when wheel companies would put out videos. It's probably not feasible in today's economy.

The only photographer who caught the trick on film was Rob "Whitey" McConnaughy. 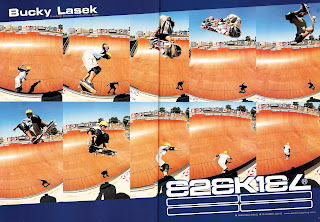 Bucky has been around a long time now. He came up in the glory days of Powell Peralta and even turned pro for them. In the years since he has ridden for Birdhouse, New Deal, Natural and Element. He recently built a gigantic concrete bowl in his backyard that is scary to just look at the pictures of. I can't imagine skating it. Much like Bob Burnquist, Bucky pioneered a lot of switch and technical tricks on vert. He could also skate street and mini ramps. Probably still can.

His first name is Charles.

The new Torey Pudwell video comes free with the new issue of Thrasher. If you hate watching things online like me, this is nice. Torey does some amazing tricks. I think it's fascinating that in a skateboard world where rail riders and huge gap jumpers are the big thing that the two leading candidates thus far for Thrasher's S.O.T.Y. don't skate either of those things and work off refining more pure street skating from the early to mid 1990s. Pudwell carries on with ledge trick evolution from the Plan B/EMB days (and let's throw in the Storm here, too) while Dennis Busenitz progresses the concept of a line. Refer to Tim & Henry's Pack of Lies, the Stereo videos, parts of Girl videos and Jason Dill's effort to bring back pushing in Mosaic among other things. I watched the parts from Pudwell and Busenitz back to back last night before going to bed. One interesting thing I noticed was that I doubt I could name all the tricks that Torey does, but could do that easily for Dennis. Make of that what you will.

Also in the new Thrasher, my friend Matt's Fluke Fanzine gets a good review. Finally, there is a tiny photo of my friend Chip from The Body in the SXSW article. Too bad there's no caption, but he still made the mag since the band was part of Thrasher's concert event. 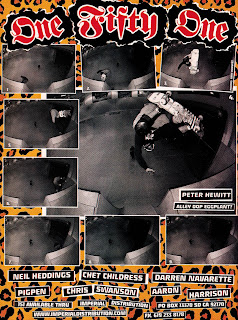 Peter during the 151 days before becoming an Anti-Hero. 151 was done by Imperial, which included Maple and Dynasty as well.

I finally got my first request from somebody for sponsorship. They wanted to know about sending a link for some footage for the team manager to check out. I'll get right on that as soon as I actually make products or hire a team manager. Please don't hold your breath waiting. 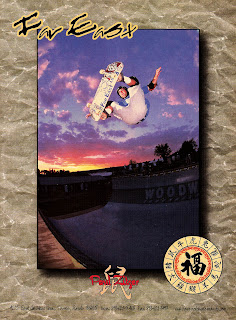 Paul is from Milwaukee. He rode for the New Deal and Birdhouse prior to Far East. He is a writer for the Skateboard Mag these days. 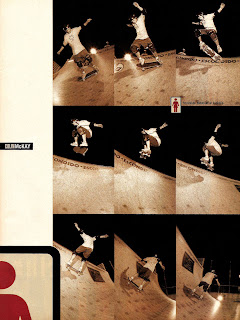 Alright, back to business.

I noticed that I sort of neglected transitions during my trip through 1998, so I figured I'd start the look back at 1999 with a week of vert.

Colin took street tricks to the ramp as is illustrated by a frontside Caballariel kickflip. He got a lot of coverage in 1999 for both street and vert. 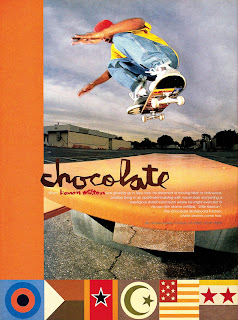 The decades are flying by.

I know this photo has been on the internet already, but it hasn't been on here yet. It's so perfect.

I'm taking next week off. Enjoy the holiday weekend in both the US and Canada. It's going to be the year before the year 2000 starting on July 11th. I went with a Les Savy Fav reference instead of Prince.