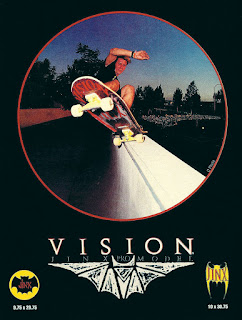 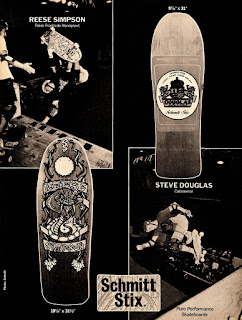 Paul Schmitt was the photographer. 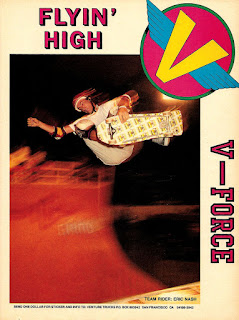 Has anybody tried Ventures since they shifted to under the Deluxe umbrella? I got a new set of trucks for Christmas and I'm curious as to if there are any differences. I noticed right off the bat the bushings are white instead of the purple that I'm used to. I've got plenty of leftover parts stockpiled so that change doesn't really concern me. I've been riding some older Ventures for a few years and they are just about done. 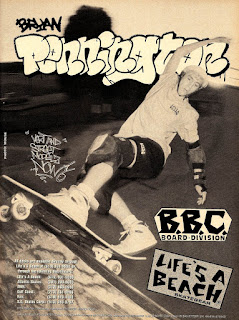 It's another Jamie "Mouse" Mosberg photo. 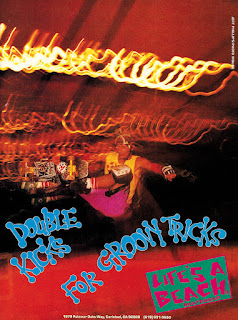 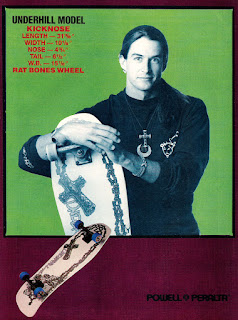 Ray was pro for Powell Peralta and was in a number of their videos. He did a lot of technical vert tricks with a smooth style. He moved behind the scenes to work in the industry after retiring from the pro ranks. He was the team manager at Gullwing and the web master for Eastern Skateboard Supply. He passed away from a brain tumor in the summer of 2008. 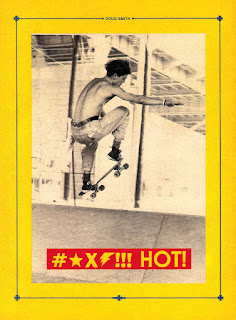 Doug rode for Powell Peralta. He had a part in Public Domain. He switched to G & S and turned pro for them. I always liked his style. I'm not sure where he went after G & S ended or what he is doing today. 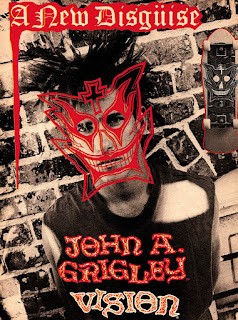 Old ghosts for the end of the world. 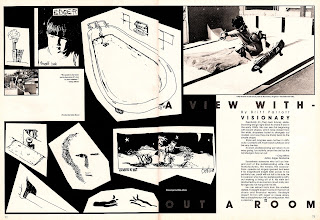 A View Without A Room was a column by Transworld staffer Britt Parrott. It was often creative work from Britt, but would sometimes feature samplings from others. This particular episode has excerpts from Chip Atkins' Edger Skatezine.

The photos are by Kate Noon. 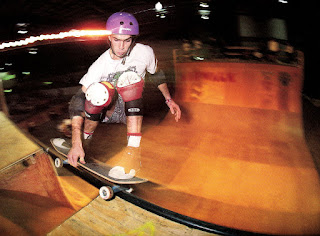 It must run in the family.

Thomas rode for Schmitt Stix. He also ran Torque in the mid 1990s. His son Grant is pro for the Alien Workshop and was Thrasher's SOTY for 2011. Thomas is the owner of Stratosphere Skate Shop in Atlanta.

The photo is by Bryce Kanights. 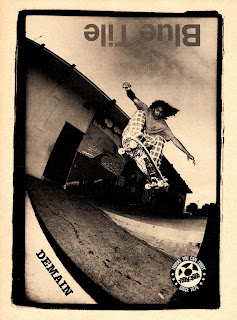 Adrian rode for Powell Peralta and Lester Kasai's House Of Kasai. He was an avid guitar player during his skateboarding days and has kept up with music after retiring from the pro ranks. He has played in a couple different blues, swing, and rockabilly bands. 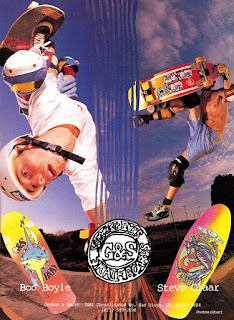 I like how Steve has put the stickers on his board with three Neil Blenders and a Santa Cruz Screaming Hand. The red to yellow fade looks pretty sweet, too.

Daniel Harold Sturt was the photographer. Kevin was one of the top freestyle skateboarders in the world, right behind his teammate at Powell Peralta, Rodney Mullen. He is from Richmond, British Columbia. His style of skating involved a lot more rolling with manual variations and board flips, instead of just doing tricks in one place. Kevin opened the Richmond Skate Ranch in 1986, which featured a number of interconnected mini ramps. This park would be the home base for skaters such as Rob "Sluggo" Boyce, Colin McKay, and Rick Howard. Kevin also started Ultimate Skateboards, a distribution company for gear. He is still doing that today. Kevin also still skateboards and even enters the occasional freestyle contest. The photo is by Steve Sherman. 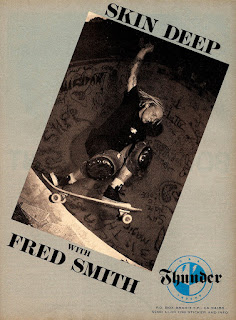 Fred rode for Alva in the 1980s. The word straight from the mouth of Tony Alva is that he never actually turned pro, yet had a board with his name on it that outsold a number of other pro's models. After Alva changed to New School, Fred was still on the team. It looks like he is hooked up with Bill Danforth's American Nomad these days. Fred is currently a tattoo artist at American Tattoo in Newport, Rhode Island. I believe he was in one of Thrasher's King Of The Road tour videos. He is also playing bass in a band called The Loud Ones. 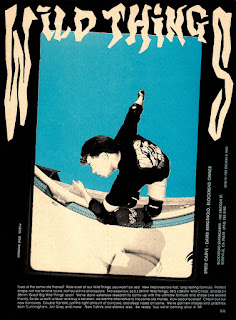 Steve Sherman was the photographer. 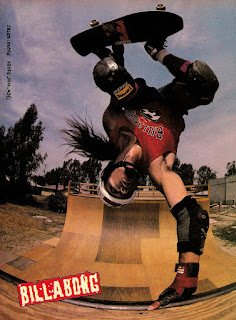 "Sporting a thick goatee and a wicked Tijuana-born facial scar in true Savannah pirate fashion, Don Fisher couldn't hear his name very well when it was called. That was because he wasn't near the loudspeakers - he was across the arena, hanging on to a railing, standing on his board's tail, sixteen feet above the rock hard Civic Center surface. All that separated him from the grey anvil-like surface was eight feet of vertical and eight feet of bent plywood. The warped nature of the tranny reflected Fish's warped mental situation as he let go of the railing and plunged. The crowd erupted in a six mega-stoke explosion. Fish hit a ding and took a heavy dive, but this didn't make one bit of difference - he had gone for it, and that's what counted."

The man, the myth, the legend.

Fish earned his place in skateboard lore when he dropped in on the Budda Budda Wall at the Savannah Slamma #3 contest in May of 1989. The Budda Budda Wall was a large quarter pipe to vert wall with two machine guns painted on it. In a possible nod to Roy Lichtenstein, the words 'budda budda' were also painted on the wall, hence the name. I had planned on including Fisher this month anyway, but after recently watching Thrasher's King Of The Road 2004 DVD where Skate Coach mentions him in the introduction, I knew I had to have something on his infamous tail drop. There were no pictures of the drop in either Thrasher or Transworld. The article in Transworld didn't even mention the trick. I'm guessing if there is video, it's on YouTube somewhere.

I do not know much about Fish. He was one of the founders of Think, with Keith Cochrane and Greg Carroll. I'm not sure who his board sponsor was. He rode for Venture and Speed Wheels.

The photo is by Chris Ortiz. 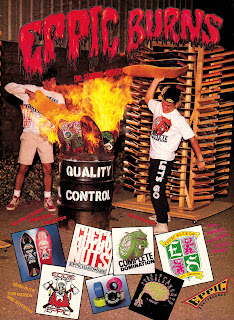 I don't know much Eppic. They were around in the mid to late 1980s. It was operated by Louis Carleton, who went on to create the mysterious Small Room. Some of the riders included Eddie Gomez, Bryan Pennington, Dave Donalson, Kris Markovich, and Sal Barbier.

The two guys throwing boards into the fire are Russ Pope and Tony Buyalos. Pope would later start Creature and Scarecrow. Buyalos was the man responsible for Shorty's, the bolt company that evolved into a board company and later scaled back down to a hardware company. Scott and Tim were both pro for Dogtown. You would always see photos of Tim doing crazy wallrides and step off shove-its that would leave you wondering how those tricks were actually done. After watching some clips recently, you realize that the tricks are a lot more fluid in real time versus the split second captured on film. Scott was, to borrow the phrase from Skate T.V., a style king. Everything he did was smooth and stylish.

David Gonzalez won Thrasher's S.O.T.Y. Props to the kid from Columbia. He helped his cause out by having mini ramp and transitions in his Possessed To Skate clip. I'm getting the Pretty Sweet DVD for Christmas and won't see it until then, so I can't offer any opinion on that yet. I would say that maybe Guy Mariano should have won. My pick from Thrasher's list of finalists would have been Justin Figueroa because he had two strong video parts on the year - Shake Junt and Bake & Destroy. In all seriousness, it should have been Dennis Busenitz. Pushing SF. Enough said. 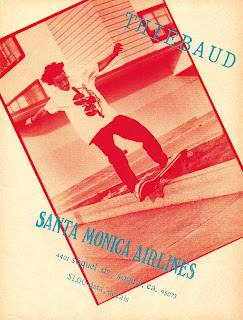 One of the crew.

Jim rode for Powell Peralta and had a good part in Public Domain. He turned pro for SMA before starting Real with Tommy Guerrero in 1991. Real was the first board company out of Deluxe, which consisted of Thunder Trucks and Spitfire Wheels at the time. Jim is still going today, working at Deluxe and skateboarding while raising a family. Roll forever isn't just the name of a video, it's a way of life. 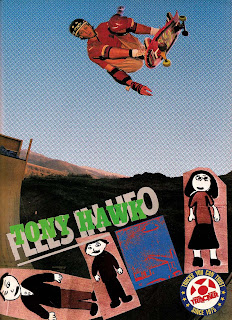 It's the time of the year when Vert Is Dead kicks it back to when I started skateboarding at the end of the eighties. I dug through the stacks and picked out what hopefully is some cool stuff for the next twenty five days.

Tony rode for Powell Peralta up until 1992. There's no need to rehash his accomplishments as I think everybody knows what he has done for skateboarding. The best part is that he is still going strong today. When he left Powell, Tony started Birdhouse, which just turned twenty. His oldest son Riley is also pretty good on a stunt wood and has earned sponsorship from Baker and Lakai. Riley had the opener in Bake & Destroy. The kid reminded me of his dad skating street in the first Birdhouse video.