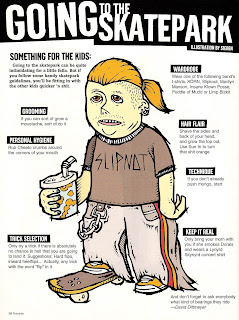 "If you can sort of grow a moustache, sort of do it."

Here's some sage advice from David Dittmeyer for all you kids headed to the old skateboard park. In related news, Roger has updated their website and posted the trailer for their video. It looks good and I'm looking forward to seeing the whole thing. Anybody know the band for the song they used?

Vert Is Dead will be back on July 9th. I need a break. It will probably be 2004 after that. Unless I come up with a better idea. Feel free to leave requests in the comments. 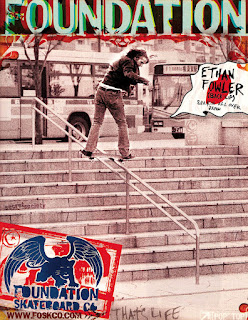 Houses of the holy. 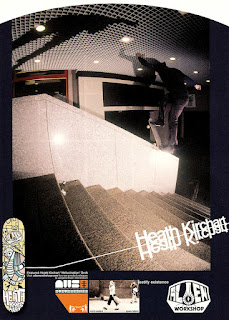 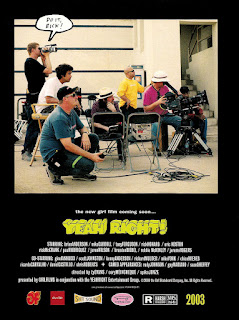 Turn on the bright lights.

Yeah Right! was Girl's video from 2003. It featured a lot and reminded me of an old Powell Peralta video. This would be due to the length, the number of parts, the skits and the variety of filming techniques. There was some high tech movie magic going down to go with more straight forward filmed skateboarding. I tend to prefer things that are simpler over Hollywood glamour, but at the same time if you have the opportunities to do things, you might as well take them. Yeah Right! has classic parts from Brandon Biebel, Brian Anderson, Marc Johnson, Rick McCrank, Mike Carroll and Gino Iannucci. I like the skit with the Crailtap board that rolls around by itself from spot to spot. I was going to watch all of it last night, but I was tired and called it bedtime after MJ. That's the problem with getting old.

The next flick from the Girl and Chocolate camp is called Pretty Sweet. It comes out in November. 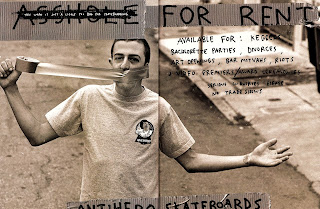 Cheers to the Chrome Ball Incident for hitting the 800 mark. 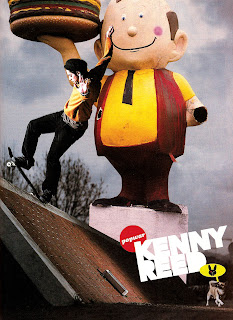 Popwar was around from 2003 to 2005. They were backed by Giant Distribution and started after the New Deal finally came to an end. Grant "Yogi" Proctor was responsible for the visual side of things. He gave the company a clean and bold graphic image. The team included Cairo Foster, Kenny Reed, Rob Gonzales, Chad Tim Tim, Raymond Molinar and a couple of others. Cairo left Real without any bodily harm to be a part of Popwar. Rob, Kenny, and Chad had been riding for New Deal and were added to the new project. After it was over, Cairo went to enjoi, Chad to Element, Rob began Listen with Danny Montoya and Kenny wandered about the planet. 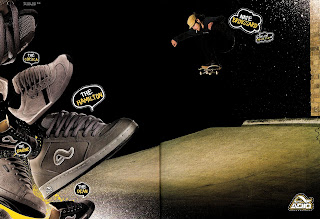 Back in the day Nate rode for Toy Machine, Planet Earth Clothing and Adio. These days he is pro for Roger and gets his kicks from Huf.

Yeah, I'm a little surprised I picked an Adio ad, too.

Adio was started up in the late 1990s by Planet Earth with help from K2. The original team included Steve Berra, Tony Hawk, Kris Markovich, Jamie Thomas, and Jeremy Wray. The company caught on fairly quickly and soon expanded to include Kenny Anderson, Bam Margera, Danny Montoya, and Brian Sumner, to name a few. They were around for most of the decade and fizzled out in the last two years. Their notable contribution to the skateboard video library was the One Step Beyond video that featured parts from some of the skateboarders I just mentioned.

Anybody else still think Gary Scott Davis instead of Go Skateboarding Day when they see the initials GSD?

Note: Nate's got a smoke in his mouth. How'd that get by the fun police at Transworld? 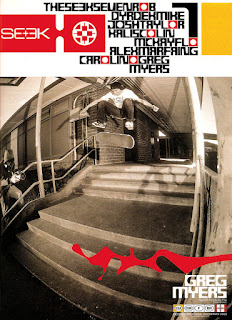 Seek was a division of the Alien Workshop that was started in 2003. It was led by long time Workshop riders Rob Dyrdek and Josh Kalis. They got DC Shoes teammate Colin McKay to leave Girl for the company. Former City Stars rider Mikey Taylor and young gun Greg Myers were added to the team. They also explored the European markets by sponsoring Flo Marfaing and Alex Carolino. Seek lasted a couple of years. After the end, Dyrdek, Kalis and Taylor were added back to the Alien Workshop. McKay and Danny Way headed off to restart Plan B. Unfortunately, Marfaing and Carolino were left to fend for themselves.

I'm not exactly sure what happened to Greg Myers. He was one of those kids who seemed to have a lot of potential, but didn't have a steady board sponsor. He was on DC for the longest time and then he sort of disappeared. 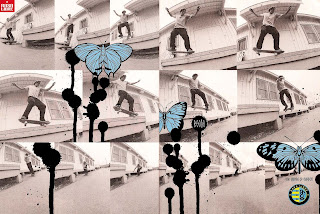 The essence of freedom.

Rasa Libre was started by Matt Field with the backing of Deluxe. Matt had been riding for Real. Nate Jones made the horizontal shift over from Real to join the team. Reese Forbes had just left Element and soon became the third pro for the new company. A big part of Rasa Libre's image was the art of Michael Leon, who had previously been working for Girl. He also had a side project for his art called Commonwealth Stacks. A couple notable amateurs included Omar Salazar and Dylan Rieder.

It's not entirely fair to lump Rasa Libre in with the extinct companies because Matt is still doing the brand today. However, there was a period of time where the whole operation was shut down and the team dispersed to ride for other companies so that's why I'm including it in the week.

Michael has since turned Commonwealth Stacks into Stacks, a board company with Reese. The team includes Sebo Walker, Dan Lebron, Ben Fisher and a few others. 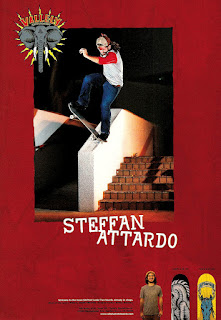 The theme for the week is companies that were around in 2003 that are no longer in existence today. I'm not doing this to pick on anybody by reminding them of past business failures, but I realized I had a couple of scans of departed skateboard companies and decided to make a week of it. Things don't always work out how you plan them sometimes. And that's OK.

Up first, is the short lived Vallely Skateboards. Mike was riding for Black Label prior to starting this up in 2002. It was backed by Giant Distribution and did not last too long. Mike would end up on Element after Valley Skateboards folded. The team included Steffan Attardo, Jesse Fritsch, Alysson Castro, and Bobby Stewart.

Steffan was sponsored by Santa Cruz before switching to Vallely Skateboards. I'm not exactly sure what happened to him after that. I thought this noseblunt slide photo looked neat when I was flipping through Transworld, which is why I picked the ad. 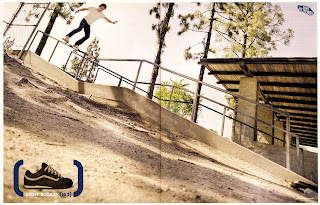 Next week's theme is expired companies from 2003.

It's a Daniel Harold Sturt photo. 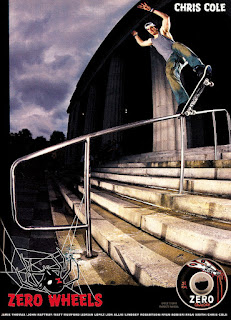 Chris became a known entity in the skateboard world around about the year 2000 with a Tensor truck ad. He did a noseslide to nollie heelflip out on a handrail. This caught the attention of Rodney Mullen and he was sponsored by World Industries. Chris was briefly was on enjoi and then switched to Zero, where he's been ever since. He won Thrasher's SOTY award in 2005 and 2009 by destroying pretty much everything he skates by doing technical tricks bigger and better than a lot of people. In 2011, he left longtime footwear sponsor Fallen to ride for DC Shoes. At the time, he also became a partner with Jamie Thomas in ownership of Zero. Chris does well in those contests you see on TV, too. 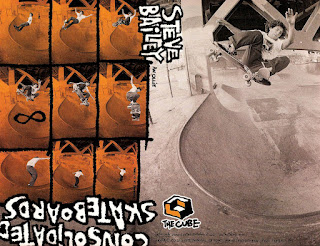 The beauty in the simplicity of a well done ollie.

Posted by Justin at 9:53 AM No comments: 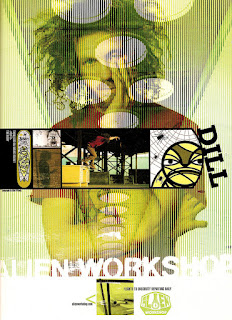 The way we get by.

In 2003, Habitat released Mosaic, their first video. It had an Alien Workshop section that featured a shared part from Steve Berra and Heath Kirchart to go with full parts from Anthony Pappalardo and Jason Dill. The rest of the team had a couple of tricks each in the section. Pops and Dill delivered some solid skateboarding. Dill's bit was full of lots of lines with plenty of pushing as an ode to the Tim & Henry's Pack Of Lies days. This was in response to how a lot of videos had become a skater rolling up to a rail, doing the trick, and cutting to the next trick after the landing.

The photography is by Mike O'Meally. 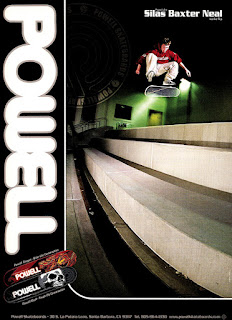 Silas started out riding for Powell before being abducted into the Habitat branch of the Sovereign Sect. He won Thrasher's SOTY award in 2008.

Work is a little hectic this week since other people are taking days off so updates will probably happen at odder than usual times. I also need to scan a couple new things. 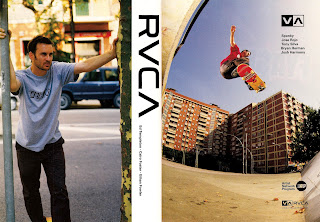 That's a joke. This is what videos used to be like back in the day. A whole bunch of vert and a couple of street parts. The term vert button was coined at the time because you would fast forward to get to the street skating. It's not the fault of the vert skaters, the fact of the matter was that more people had a driveway and a launch ramp than they did a giant halfpipe. These days I'm far more likely to skip a street part to get to the vert part.

RVCA was started in the early 2000s by Jimmy Arrighi. The original pro team included Ed, Cairo Foster and Ethan Fowler. The ams were Kevin "Spanky" Long, Jose Rojo, Tony Silva, Bryan Herman and Josh Harmony. Recently Arrighi started Eswic and about half the team went with him. RCVA went for the artier side of things and I liked that about the company. They were publishing a cool quarterly magazine spotlighting various artists, galleries, bands, and record labels. An issue shows up in my mailbox every so often, even after I thought the mag was over. With Ed leaving RVCA, I'm thinking the magazine is probably done. I guess they also sponsor people outside of skateboarding, such as mixed martial arts fighters. I try not to think about that since I still dig some of their t-shirts. 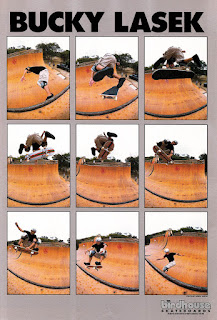 Bucky in the Birdhouse days. It's crazy how long they have used basically the same ad format. I think he's maybe doing a 360 nollie kickflip.

I'm giving the younger generation a simulation of what skateboard videos used to be like back in the 1980s. All vert with one token street part, which I'm saving for tomorrow.

Chris Ortiz was the camera guy. 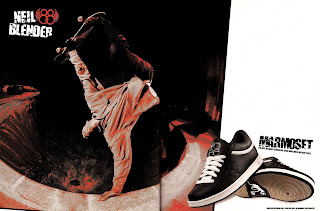 The photo is by Ed Dominick. 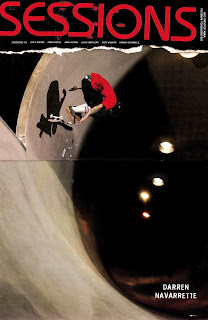 Navarrette kickflips into the full pipe.

It seems like Creature has been getting a lot of coverage in the mags lately. I'm fine with that, except for the part of me that is jealous about them getting to go to Australia. I need a proper vacation out of the country again someday. 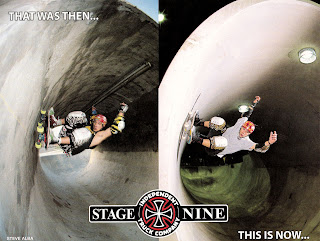 The photo on the left was taken in 1988 or 1989 at the original Pipeline Skatepark in Upland, California. That park was demolished in 1989. A new version of it was built in 2002, which is where the photo on the right was taken. You could take Salba out today and still get the same picture, twenty years after the first and ten years after the second. 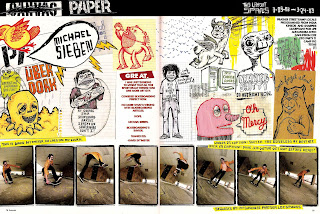 Michael does art and writes stories for Thrasher. I'm glad that there are people like him involved in skateboarding to keep things from getting too serious. He works with Stacy Lowery to run Roger Skateboards, one of the best companies going these days.

I wonder were Dittmeyer sleeps now that Sieben's got a kid?

The photos are by Lee Brooks.