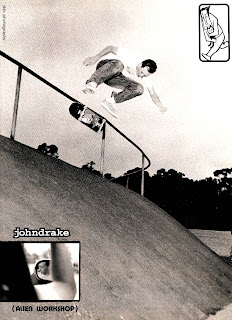 I've been muddling through the week and since Skateboarding Is posted Thomas Morgan today, I figured I'd run another Alien Workshop rider from about the same time frame.

The 3D issue of the Skateboard Mag turned out pretty well. I thought they might overdo the 3D stuff, but it was done in an appropriate amount. There's a good interview with Austin Stephens and a bunch of other interesting reading.

After checking out the new Wallride catalog, I'm left wondering why isn't there a t-shirt for Marc Johnson's Experimental Rudy Johnson inspired graphic? Ditto for the Kenny Anderson Shogun Warrior deck, although that one falls more along the lines of wanting a toy that I never had as a kid.

Vert Is Dead will be back on Monday. I'm giving myself a three day weekend and getting out of town to visit people I went to college with.

It will be Children Of The Sun next week.

The photo is by Paul "Skin" Phillips. 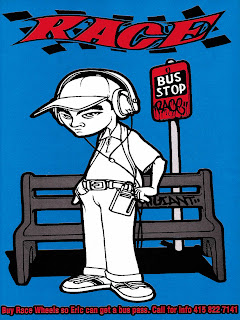 Waitin' on the bus. 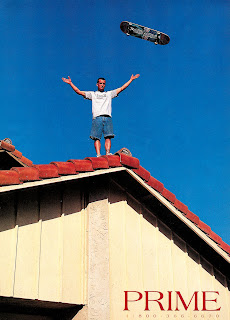 By my calculations, this was the second ad for Prime. The first was a team photo. After Color went under, Markovich started Prime with many of the same riders. He also chopped off his long hair.

Incidentally, Tony Hawk had an ad for Rusty in the same issue of Transworld where he was throwing his skateboard off a cliff. 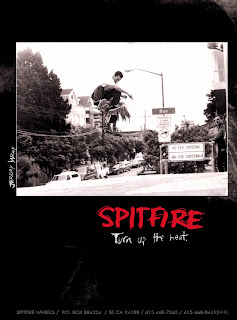 I've been meaning to have some Jeremy Wray on here for a long time, but never got around to it.

I wish he was more visible these days. 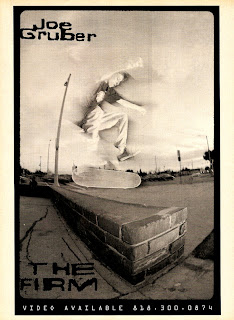 Joe was probably the last new guy to go pro for Vision before that company went under. His graphics were a rip off of Shaggy and Scooby Doo. He soon joined up with Lance Mountain at the Firm. His brother Keith was also on the team. 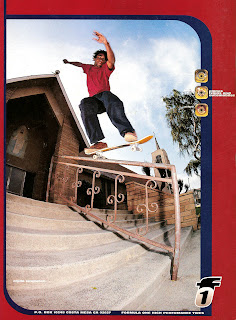 Acme made Clyde a professional skateboarder in 1994. He soon bounced for 101 and a pro board with his name actually printed on it. He teamed up with Sal Barbier for 23 and Aesthetics after 101 was shelved. In addition to his skateboarding skills, Clyde has graced the pages of many a magazine with his raw take on the English language. Not that Big Brother wouldn't have been interesting without him, but he added a lot of entertainment value to its pages with his articles and reviews of videos and albums. There were a bunch of great skateboarding photos, too. 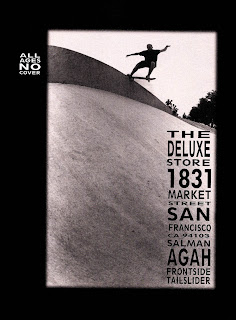 Salman started off as an am for Powell Peralta and turned pro for Real. He won Thrasher's SOTY for 1993 because he took skating switch to a whole other level by doing things like switch ollies over fire hyrdants. He also rode for the Firm for most of the 1990s. He had a pro shoe for Vans called the Camel Toe. I want to say that he was the second person to have a pro model shoe for Vans after Steve Caballero. Big Sal is rocking Legend Status at the Black Label and working for Steve and Eric's little skatepark project nowadays. 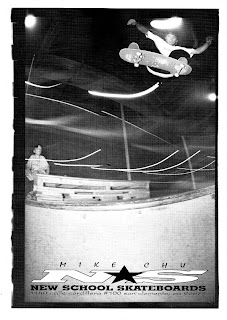 New Schooler with the big ollie snaps. He ollied Wallenberg and had some big tricks in the two New School videos that I have. 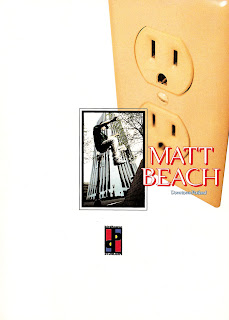 Matt turned pro for Birdhouse and won the Back To The City contest in San Francisco in 1993. He then switched to the Firm for the duration of that company's existence. Matt is currently riding for Skate Mental.

To confirm the year that he won the Back To The City, I did some online searching and wound up on the New York Times' website. They had a page of text listing every single winner in every sport for 1993. This is what they had for skateboarding: 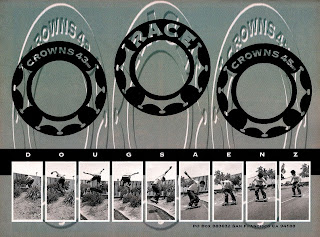 Doug rode for New Deal and Underworld Element. He was also on Consolidated and I believe the first time around for Creature. He plays with Karma Tsocheff in their band AM Magic. Race had a nice thing going with their ads. This is his am check out from Thrasher:

Where do you live?
Pleasant Hill.

Do you have any sponsors?
Yeah, I ride for Underworld Element, Venture Trucks and Race Wheels.

When did you start skateboarding?
The summer before eighth grade. I can't remember. It was a while ago.

What board?
Some old Powell board.

Who do you think is rad right now?
Karma is rad. Brian Chung, my friend, John, there's too many to list.

What do you like to skate?
Pretty much anything, like blocks and bumps and stuff, just whatever.

Do you think there's anything wrong with skateboarding right now?
I guess there are lots of things wrong with it, but there are good things too, it's just like how people perceive things is kind of messed up.

Have you ever gotten really hurt?
Not really. I sprained my ankle a couple times, broke my wrist once, it was just a chip, but I never got it fixed.

Who do you usually skate with?
My friend John, Pete, Karma, Keith, and just whoever's around.

What do you like besides skating?
Just being with my friends and having a good time.

What kind of music do you listen to?
I like old rock of the late sixties to the mid-seventies, stuff like the Who. I like going to record stores, trying to find records. That's pretty much all I do.

Who would you like to thank?
Greg Carroll, Andy and Johnny. 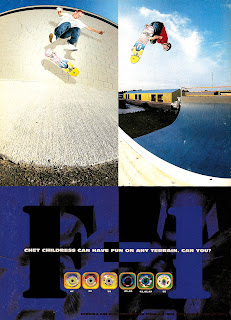 Old Ludacrooks back in the Acme days.
Can I get a nollie heelflip? 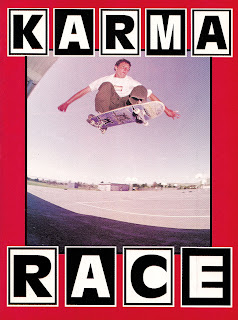 So it's been kind of slow at work this week and I took a little time off in the morning so I could sleep in after seeing Titus Andronicus (the band, not the play) last night and what happens? I get slammed with work designing menus for Italian restaurants and postcards for landfills. That's my day. I'm hoping my tired body has the energy to go skateboarding tonight. 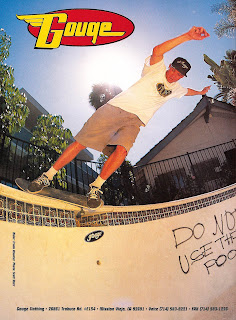 Frank is a pool and harsh transition rider. During his days on Blockhead, he was notorious for doing some gnarly wallrides. He gets spotted on Burnout from time to time. 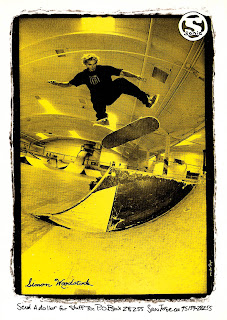 Simon rode for Black Label, Koklieb, New School and Sonic in the early 1990s. He had a habit of riding unusual skateboard creations. This included putting trucks on a skimboard and ironing board, bolting two regular skateboards together and replacing the griptape with carpet. He was known to wear silly outfits like clown costumes, Santa suits or skate barefoot. He even managed to score a pro model shoe from Vans. There was a clip featuring Simon and his weird skateboards on MTV Sports with Dan Cortese.

Congrats to Chrome Ball on hitting the 500 mark.

The photo is by Lance Dalgart. 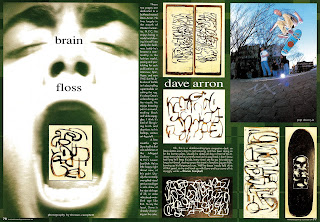 There was a request for some Brain Floss that I'm happy to honor.

Brain Floss was started in late 1993 by Transworld to showcase skateboarders and their art. The first had Steve Berra, Kris Markovich, Laban Pheidias and Ed Templeton. Usually the two page spreads aren't just reserved for pros, but rather artists who skateboard. Sometimes this includes artists for companies, too. Andy Jenkins and Ron Cameron have both had one.

Thrasher was quick to add their own version of Brain Floss called Canvas.

For as simple and as almost dumb as it looks, I really want the B-Ball All Stars board Dave is riding. I'd hang that on my wall for sure.

The article is by Thomas Campbell. 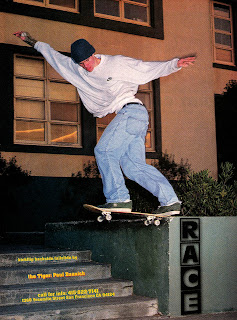 Paul was pro for Think and moved on to work the computers at Slap.

I had a pair of Airwalk Jim Shoes in that same green color. I also had them in brown and beige. That was probably their last good design. I know I stopped wearing Airwalk and went on to Duffs by 1995.

I have no idea what Paul is doing today. Ditto for Rick Jaramillo. If anybody out there does know, leave a comment or send me an email. 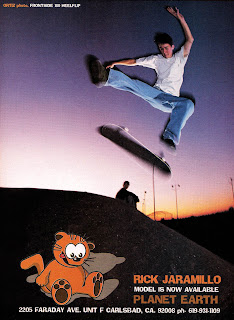 Rick was a Las Vegas skater who rode for Blockhead and Planet Earth. He had a couple of tricks in Zoo York's Peep This video, too. 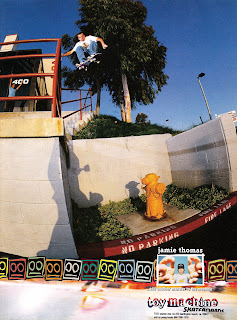 The holiday weekend is over and it's back to work.

After riding for Invisible, Jamie really started to establish himself once he got on Toy Machine. Along with the on board stunts, he also started filming and editing videos.

Surprisingly, there haven't been any Jamie Thomas scans on my website or the Chrome Ball Incident.