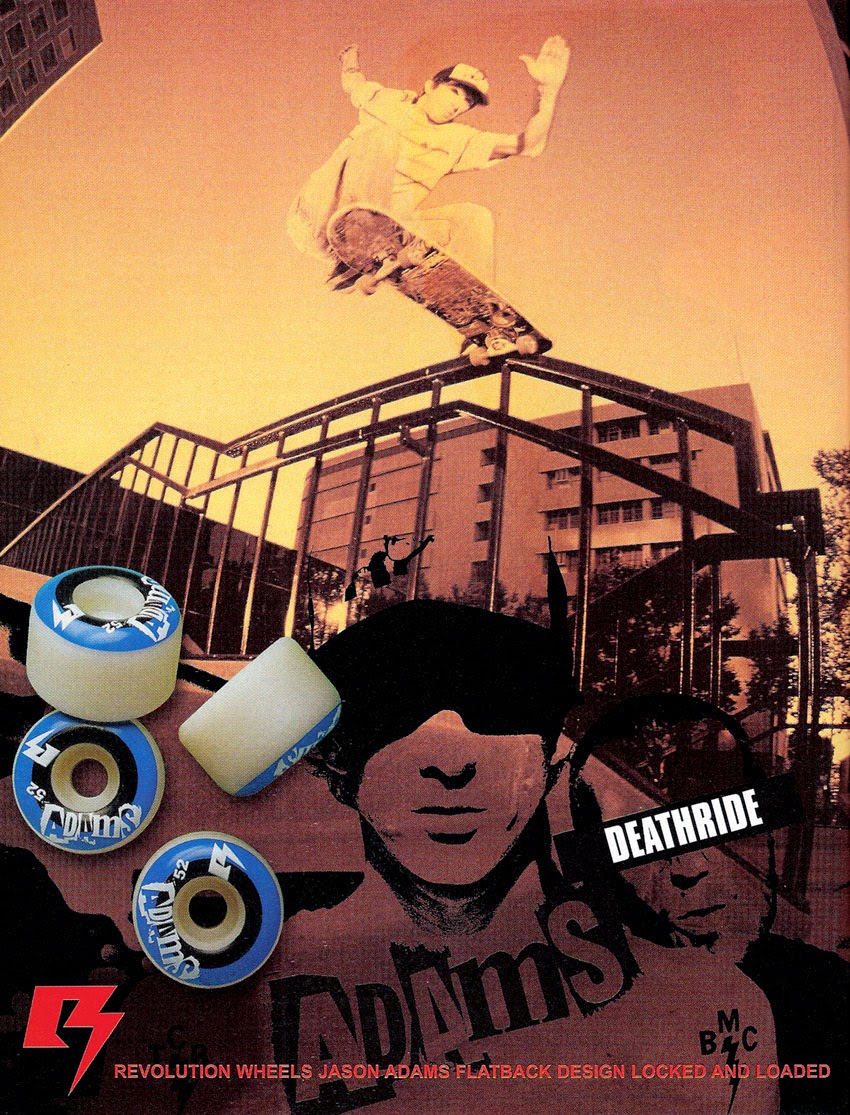 Jason has had a lot of noseslide on handrail photos over the years.

Revolution was a wheel company done by the Black Label. A lot of the guys on the Label also rode for them, along with Alan Petersen and Chris Senn. 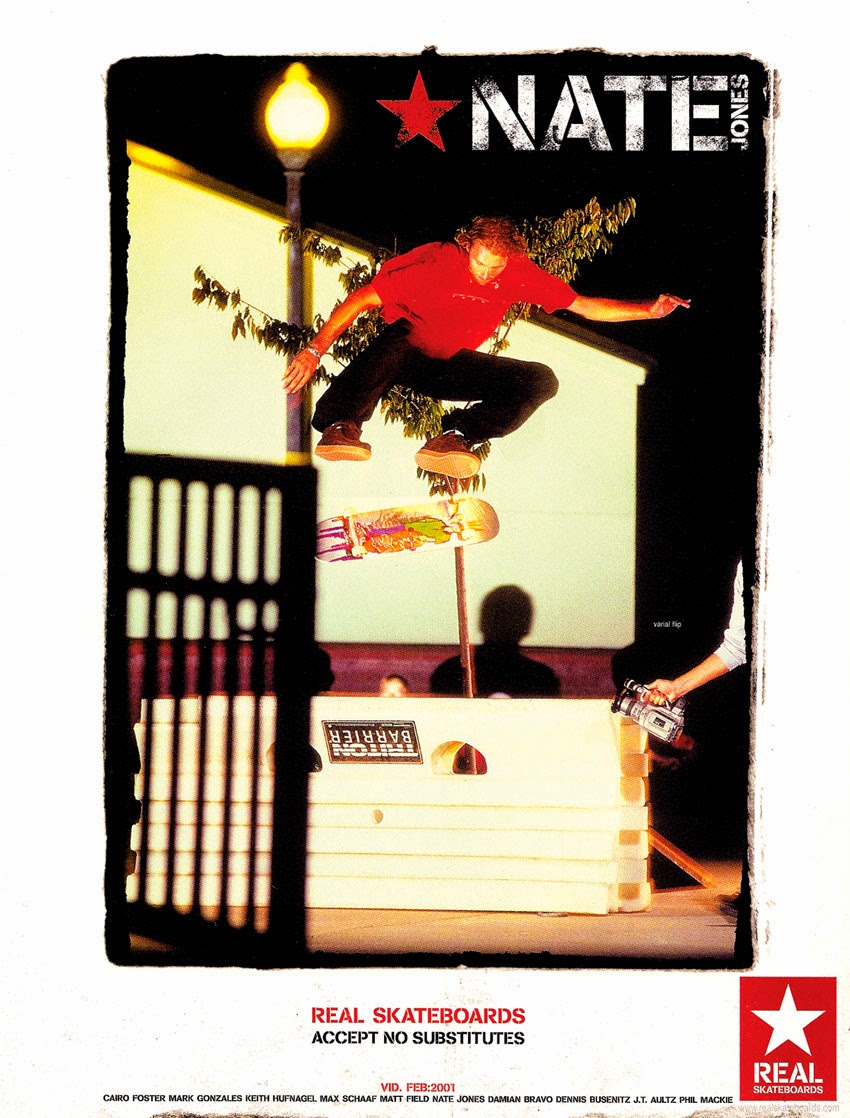 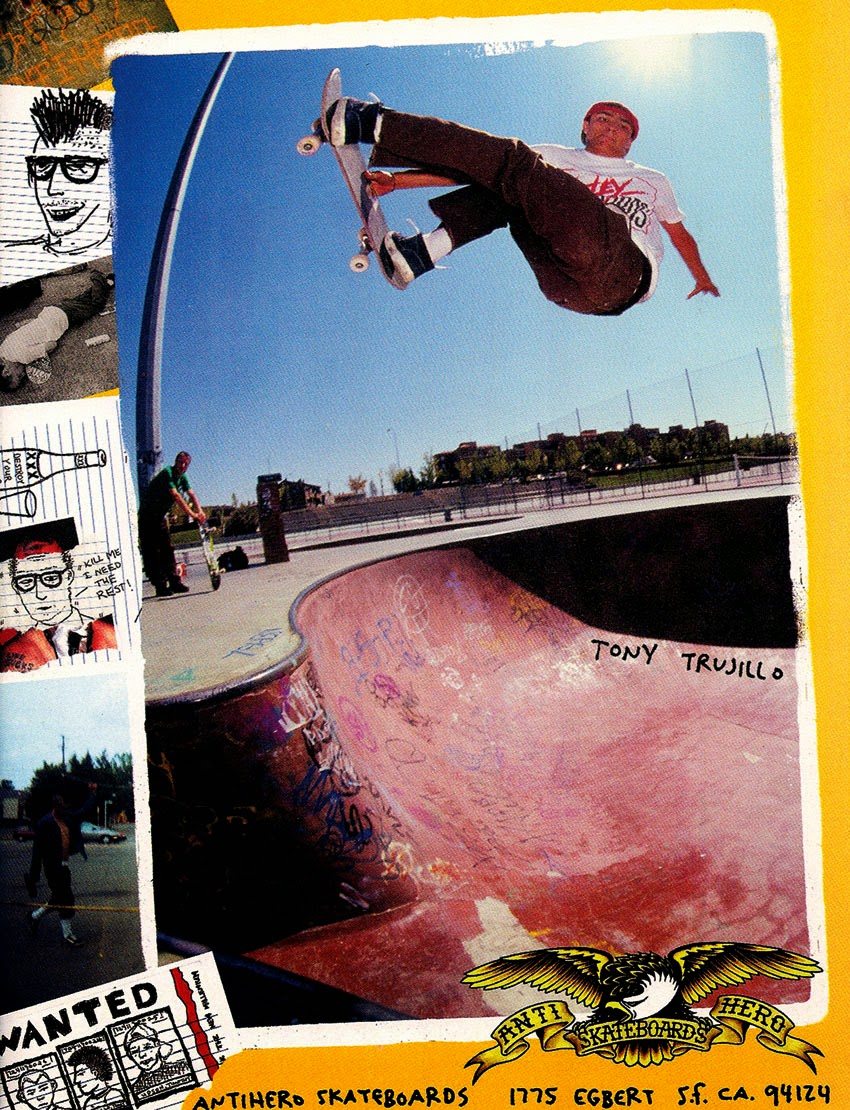 The money will roll right in. 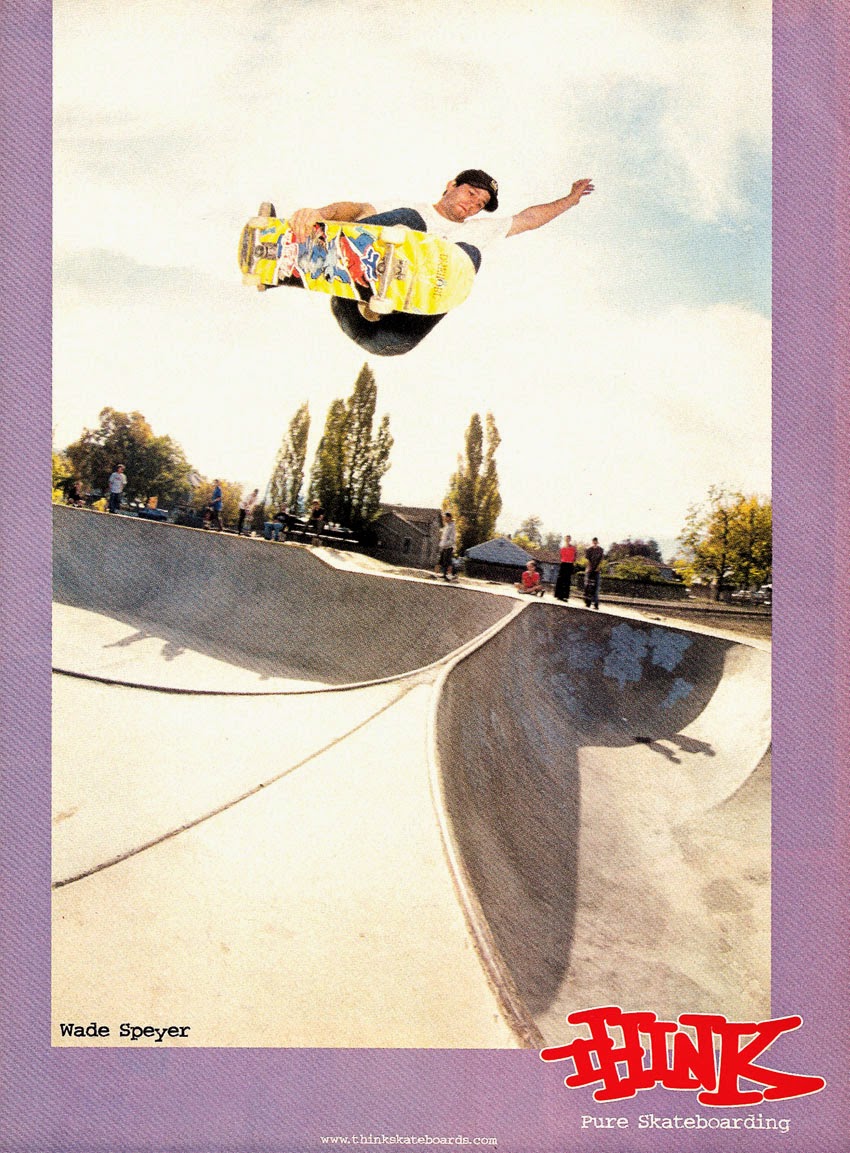 "He always wants you to do your dishes. He always says, "Do your dish." That's Wade's famous quote in the kitchen. Wade hates dirty dishes." - Karma Tsocheff

Karma dishes the dirt on Wade. The two were roommates back in the early 1990s. They also both rode for Dogtown. 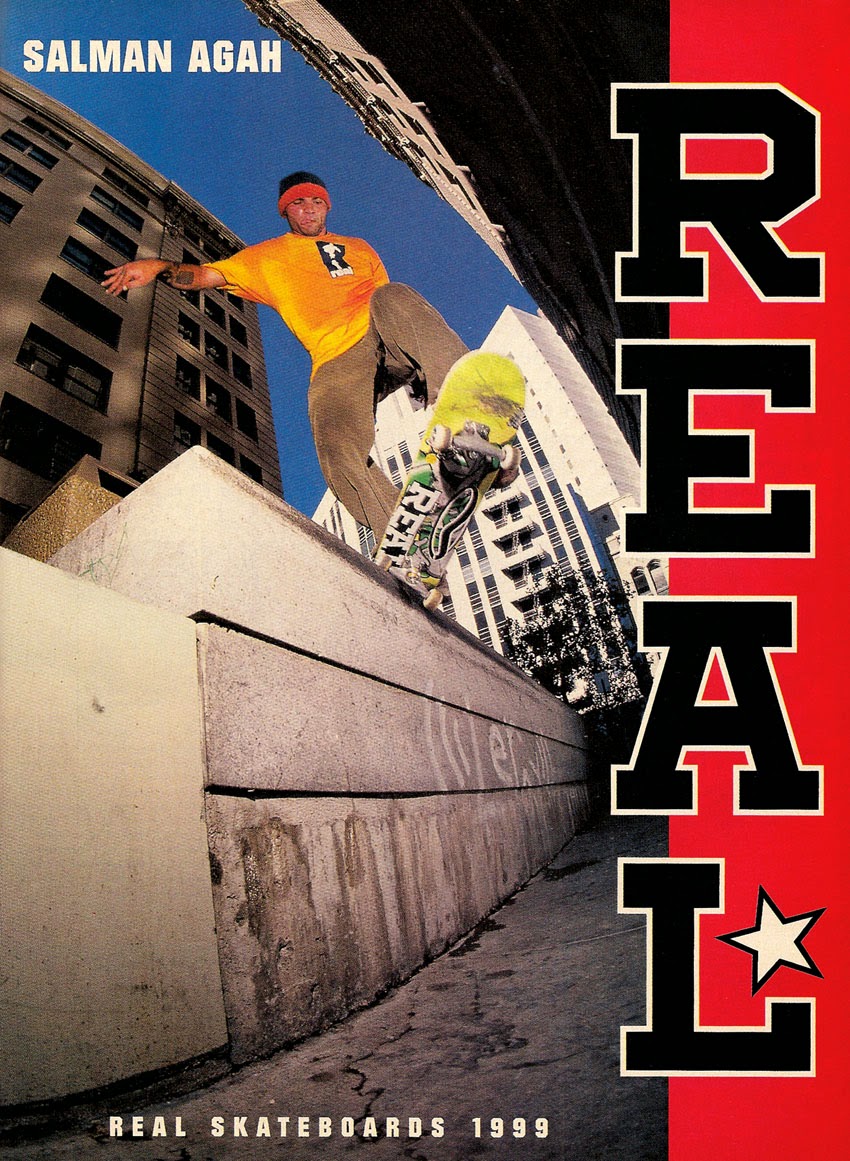 Powell Peralta to Real to The Firm to Real to Black Label to running a pizza shop.

I watched Salman's part in Black Label's Black Out video from 2003 the other night. For being a big guy, he is nimble enough on his feet to spin backside 180 nosegrinds to 180 out. That's a beautiful looking trick when it is done right. Thrasher's 1993 SOTY still has a board out on Black Label's Legend Division.

I like the music in the new part from Alien Workshop featuring Frankie Spears. The kid rips. 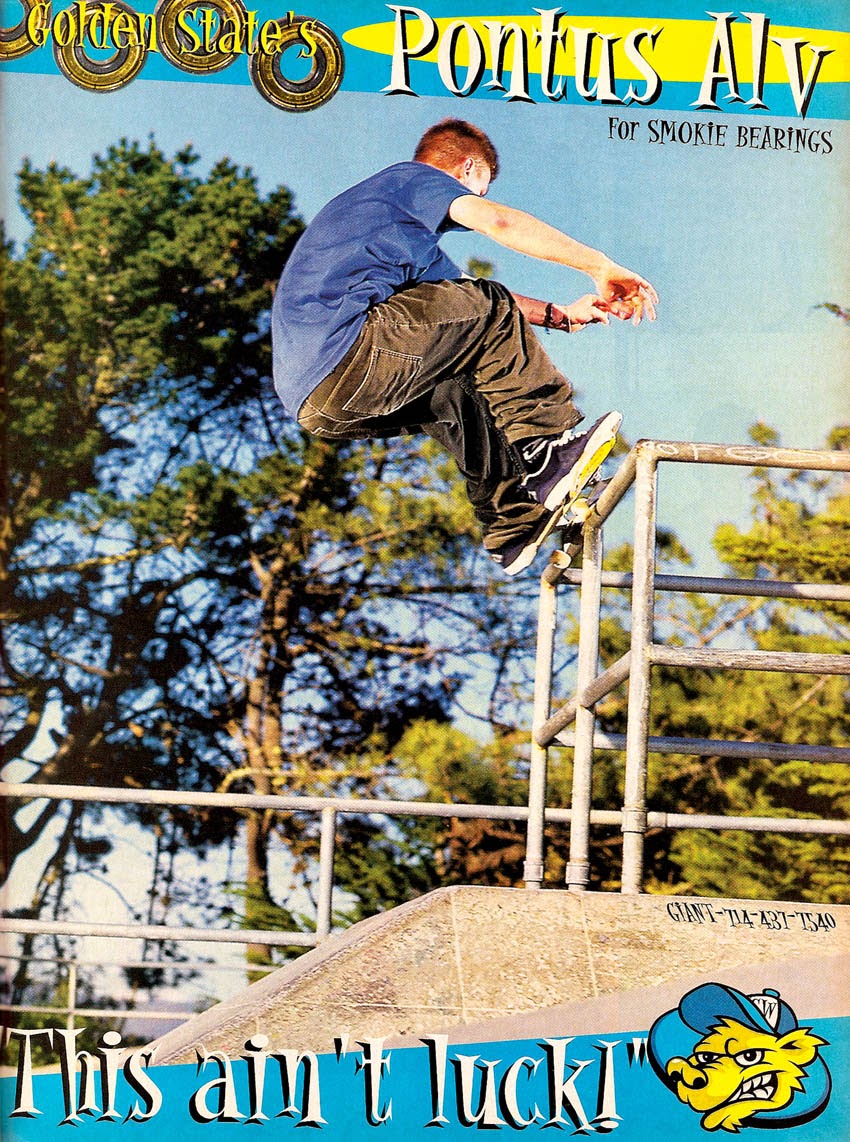 "Yeah. Oh, they have no idea what Mad Circle is or was. It’s funny; I was talking to my artist Jacob Ovgren today about this. Another friend of ours was just in LA skating around and they were all super hyped on Polar in LA then he asked them like, “Have you seen his films? The stuff he did before?” and they were just like, “No, we never heard of them.” I think that’s funny though. Sometimes I think we take for granted that people know everything about everything. If you didn’t skate five years ago, why should you know what happened ten years ago?"

Pontus is from Malmö, Sweden. He rode for Mad Circle, Arcade, and Cliché. There were a few years without a board sponsor before starting Polar. He also made a couple of films, Strongest Of The Strange and In Search Of The Miraculous, that showcased skateboarding in Sweden and all over the globe. I'm a huge fan of Polar and it's probably my favorite thing in skateboarding right now. I think the boards are great, the graphics are well done, and the team is ripping, even if I don't fully know who they are. But it's all cool. 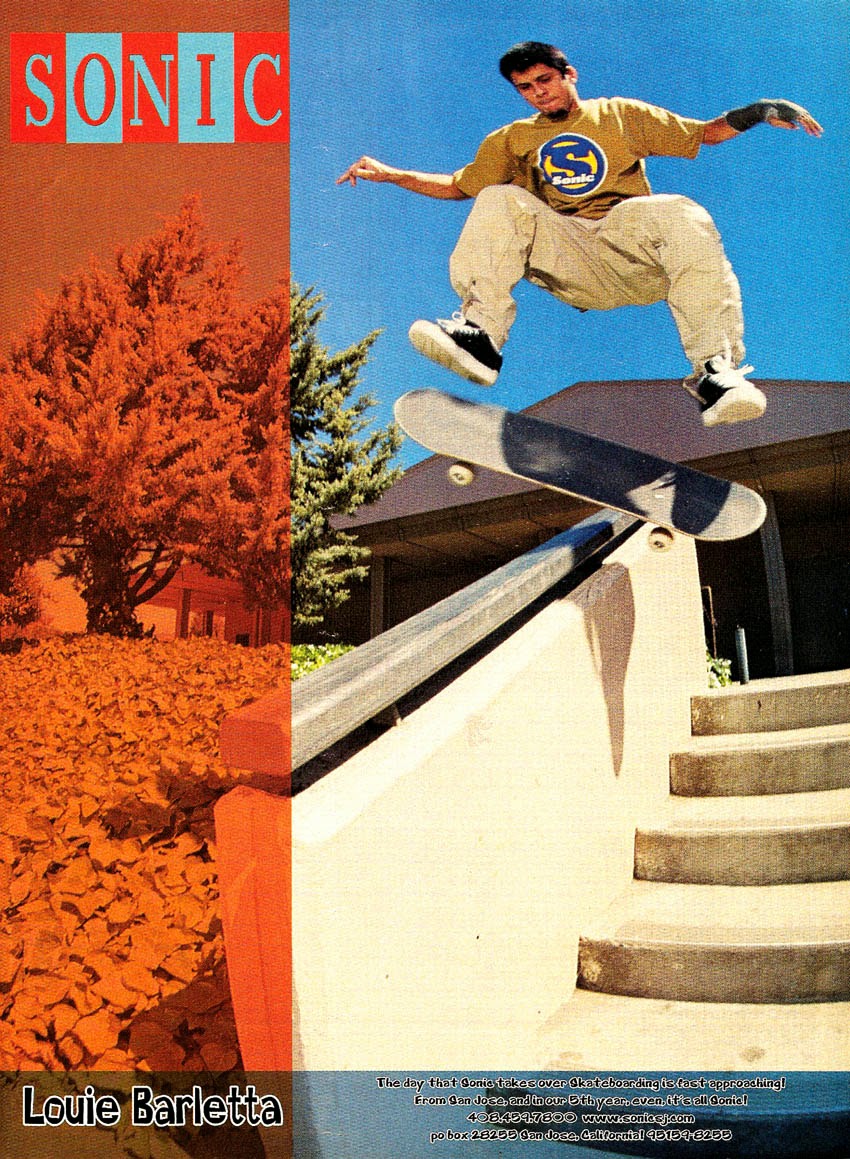 "I love it! I only did what I saw guys like Neil Blender, Lance Mountain, and Jeff Grosso doing. Blame them! No, seriously, having fun comes in all forms from all different angles. To some, fun is big handrails. To others, it's a tall can and a red curb. The fun and satisfying thing about it is self-expression. The only thing that would bum me out is to see people doing it 'cause someone deemed it a hot new trend."

An interesting note about this ad is that Sonic ran an ad five months later introducing Louie as a new team rider. He was doing a hurricane at Hubba Hideout. 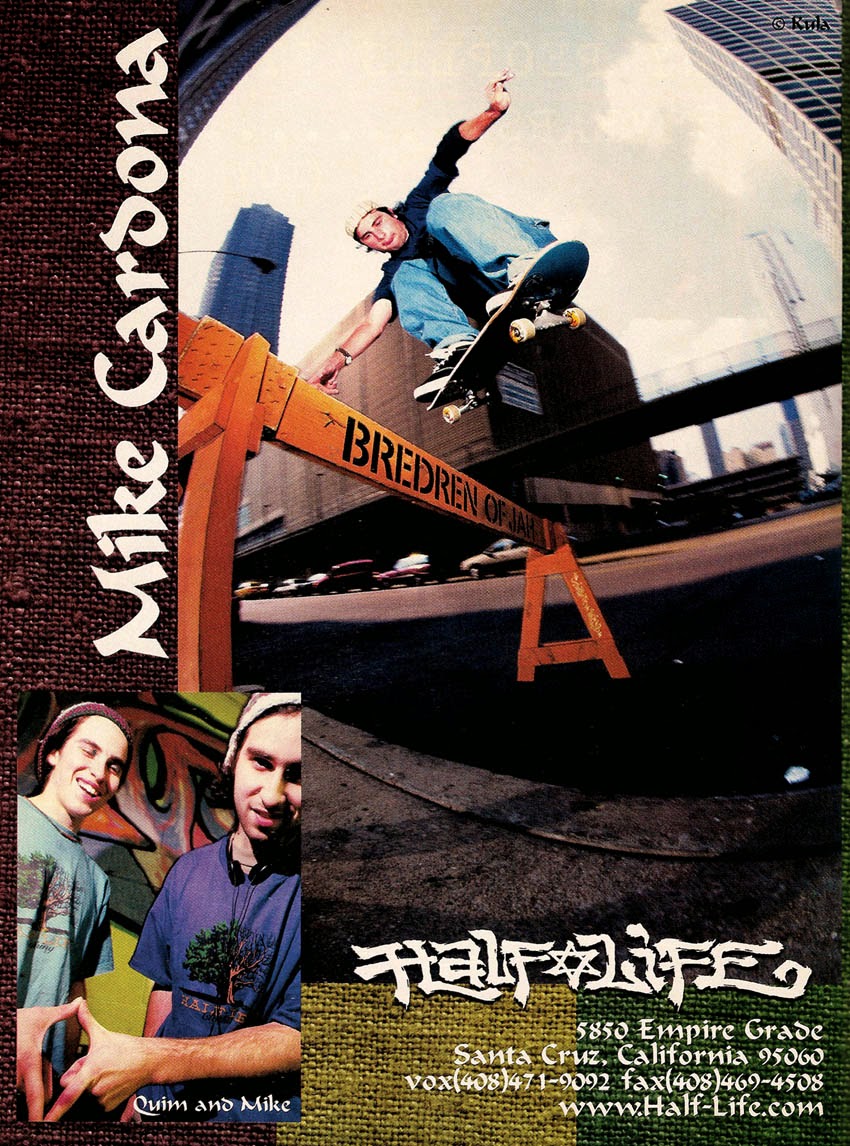 Mike was Quim's brother. The Cardonas are from Scotch Plains, New Jersey and they grew up skating all the East Coast spots. He rode for Real, Spitfire, Thunder, and Airwalk. Mike did a lot of street grabs and big ollies, which was a little different than a lot of what was going on at the time. I liked his style.

The photo is by Geoff Kula. 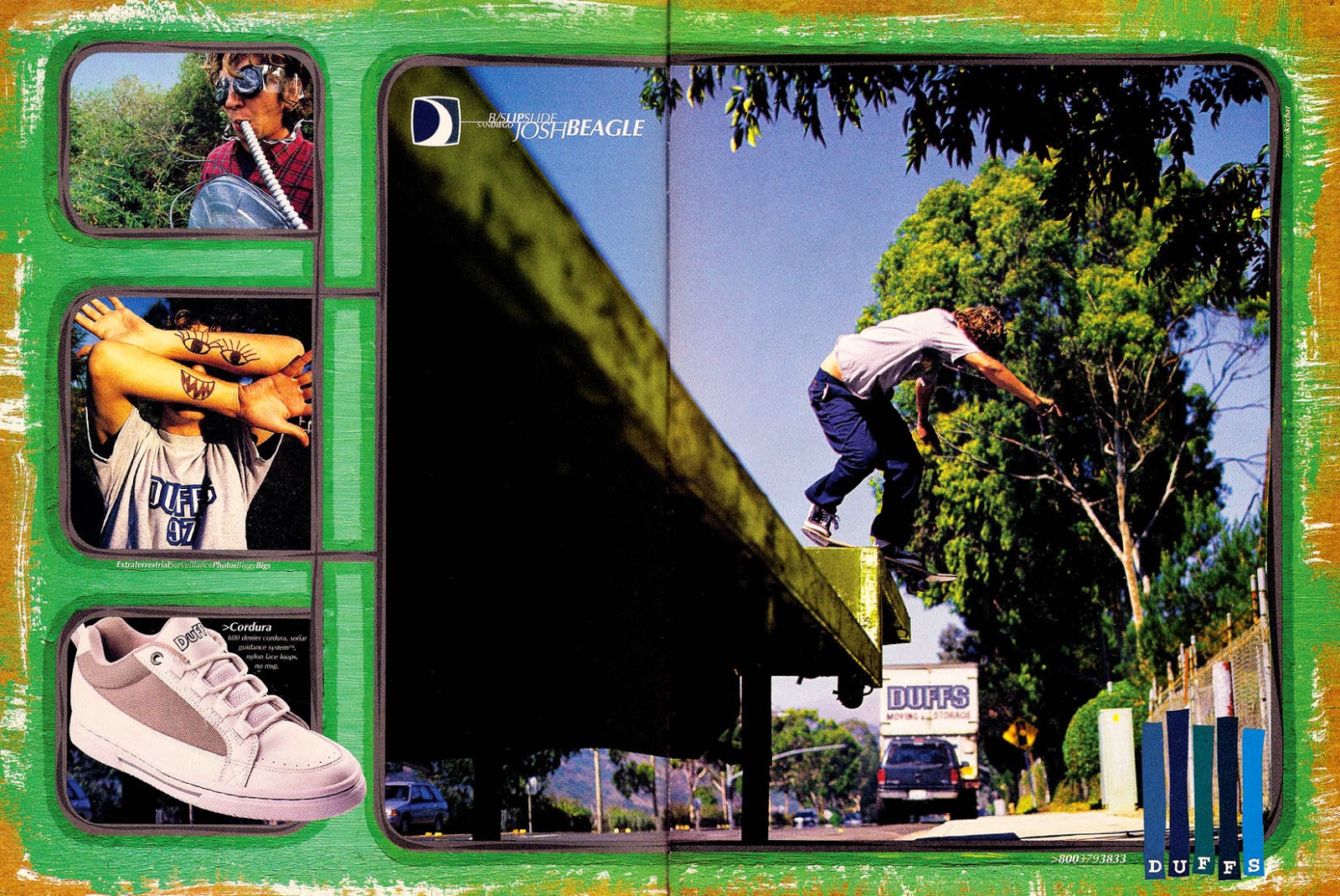 "I wake up at ten or eleven, get breakfast at McDonald's, eat half of it. Go skating for about two hours then eat the other half. Go home, eat more. Go back outside, skate for another two hours or so. Go home, eat a little more. Then I go to stores and buy stuff."

The life of a professional athlete in the mid 1990s.

John Fitzgerald can do some big ollies over stuff. His part in the new Hockey video is burly. 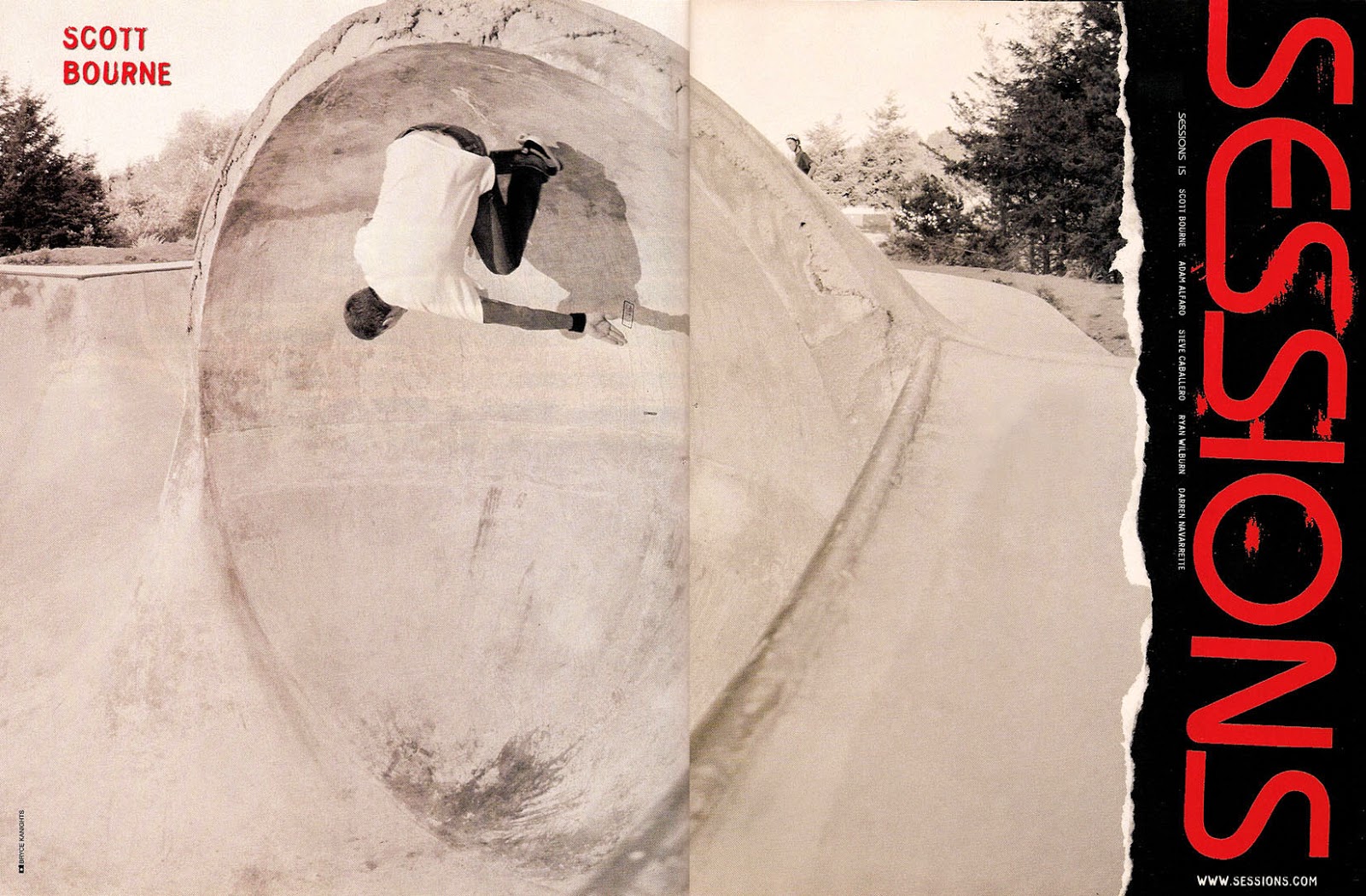 Scott had a full part in Pontus Alv's Strongest of the Strange video from 2005. It consisted of a lot of SF street action as well as hitting up spots in Europe. This loop in the cradle is in the video. There is also footage from a trip to Mongolia with Pontus and a couple other skaters. That's an unusual destination for skateboarding, but the crew found a few things to ride on. I want to say that Strongest of the Strange was about the last of the skateboarding we saw from Scott, as he moved on to become a writer soon after. I might be wrong on that.

The photo is by Bryce Kanights. 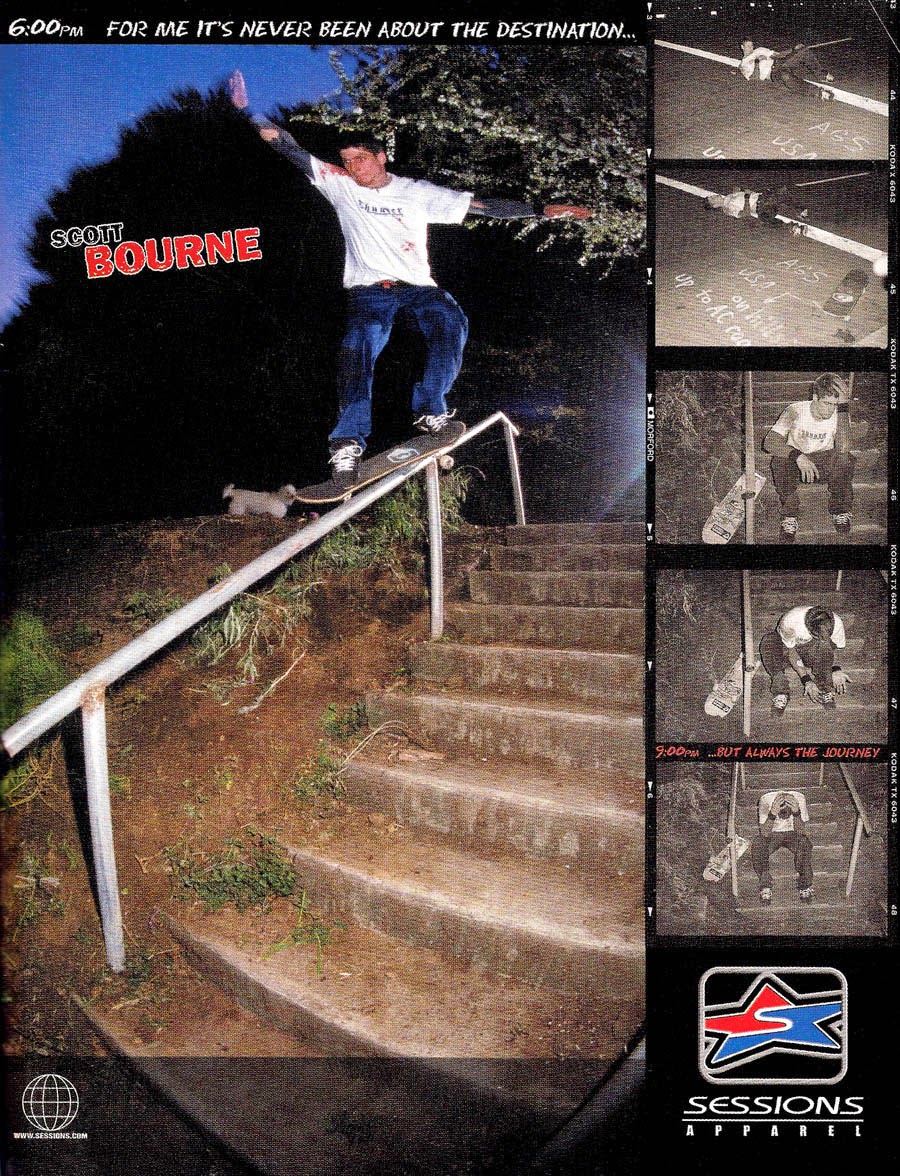 I don't think of Scott as a handrail guy, but he has battled them over the years. Of course he tends to pick the odder, longer, flatter rails that often require a ramp or some type of special setup to get onto. He usually is doing some type of crazy nosepick or blunt fly out on a ramp. I've been watching a couple of his video parts and he does not do much in the way of lines, it's all going big and hoping to roll away unharmed.

The weather has been finally been nice enough to go skateboarding at the local park. I went for a long time Sunday afternoon and then until it got dark yesterday evening. It feels like I forgot what tricks I know how to do, which cannot be a good thing since there weren't many of them to begin with. It has been fun and I'm glad the winter is over. 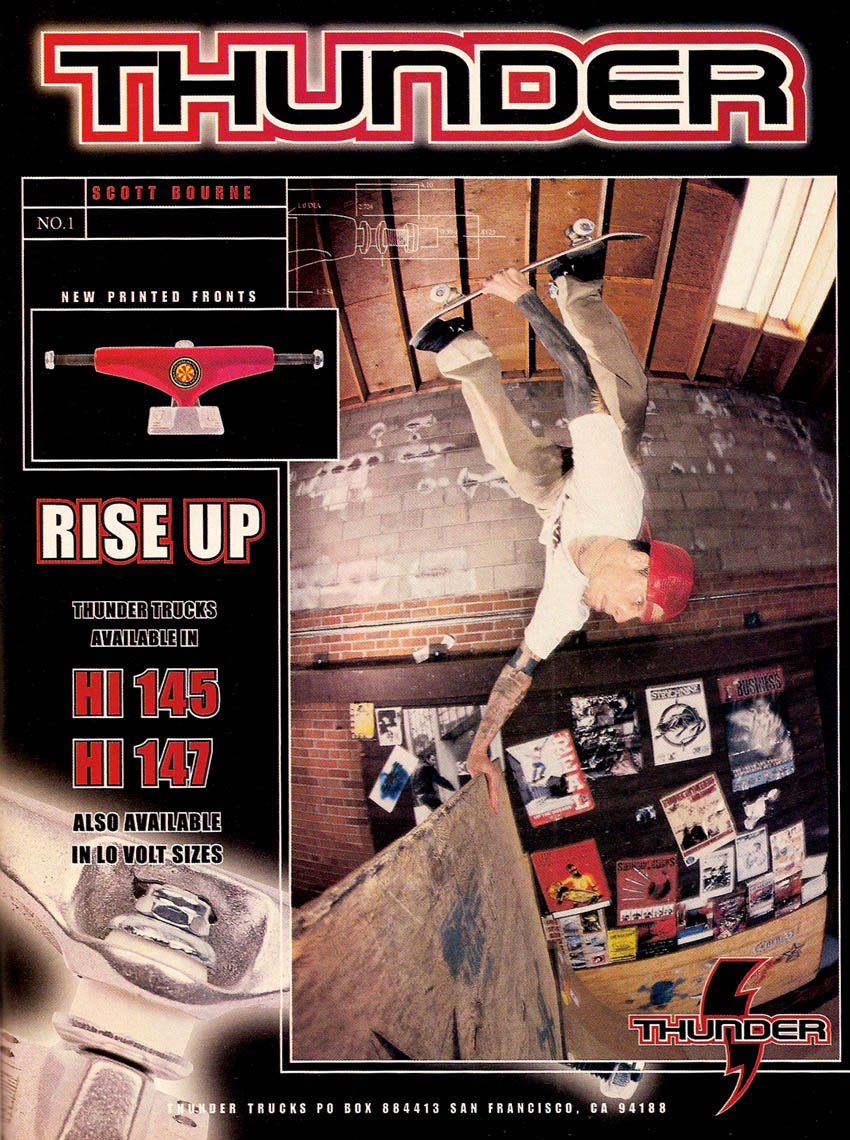 Scott gets inverted on a plywood extension at Jim Thiebaud's mini ramp.

Wasn't there some sort of beef between Consolidated and Deluxe in the early 2000s? I cannot remember exactly what stupid thing it was over, but I remember any Consolidated rider on Thunder and/or Spitfire got kicked off those teams. 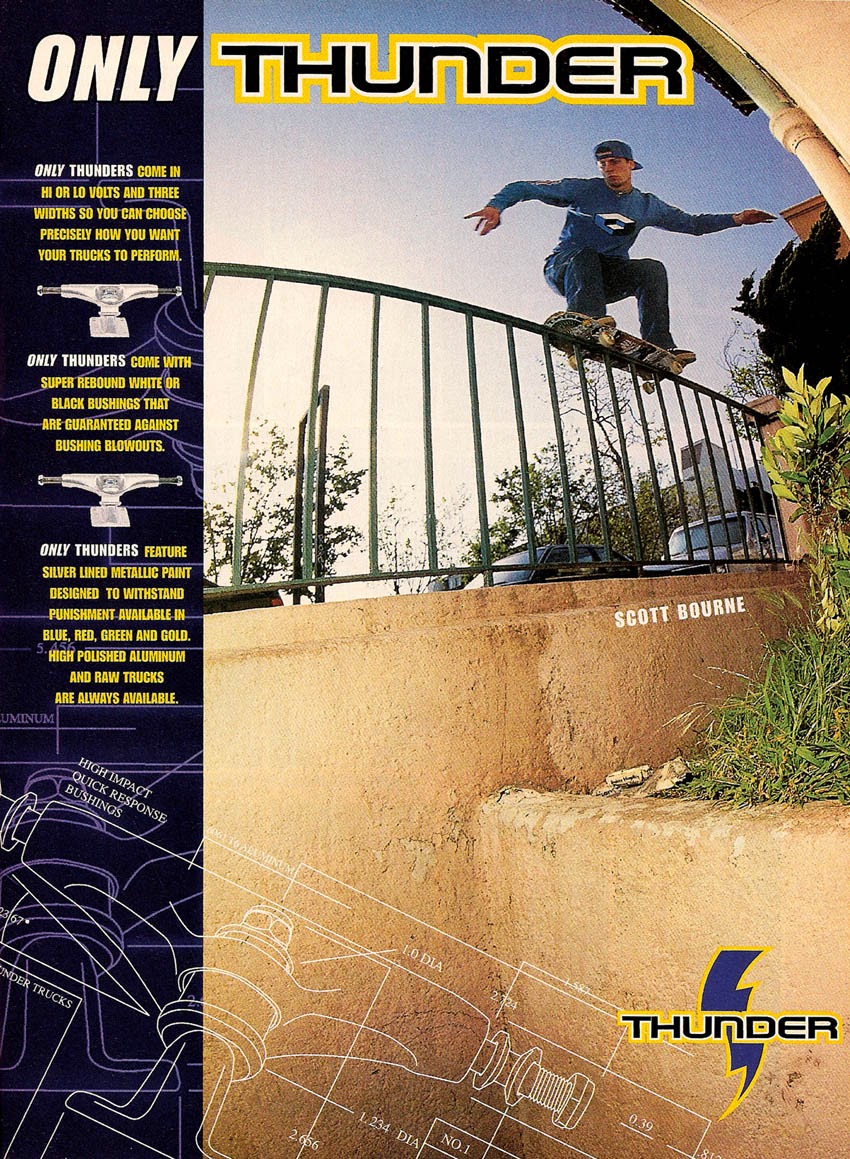 It's Scott Bourne week. I dug around and found a few things that probably haven't been on the internet as yet. Maybe.

Scott was an am for Consolidated and turned pro for them in the later 1990s. He left the Cube to ride for his own company called the Unbelievers in the early 2000s. After a tour of Europe, he became enamored with France so he moved there. He's a writer these days. Scott also rode for Vans and then Puma. 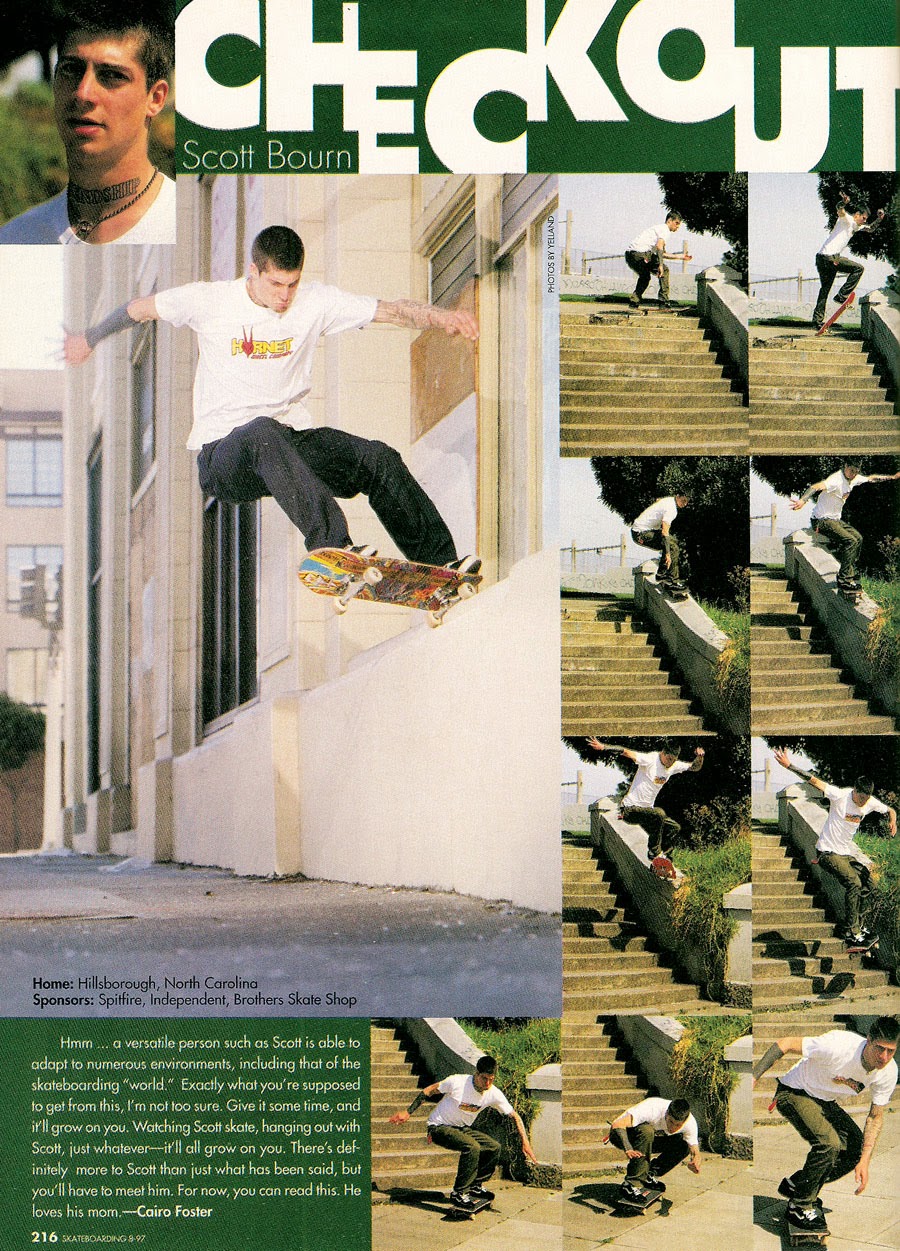 Hornet Wheels was done by Think in the mid 1990s. The team included Karma Tsocheff, Paul Zuanich, Hanzy Driscoll, Doug Saenz, Jesse Paez, and a few others. It did not last too long. I'm mentioning Hornet because Scott is wearing their shirt and he is listed as being sponsored by Spitfire. 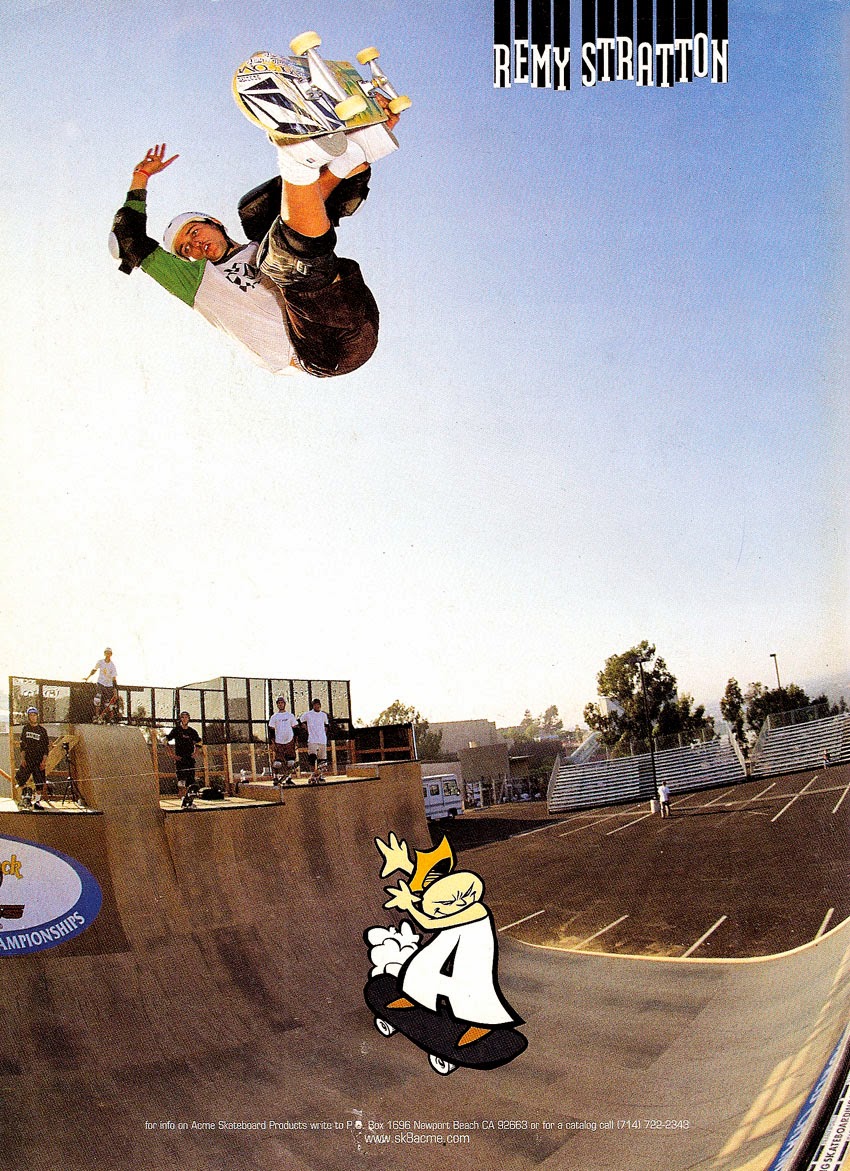 "Anyway, we were sitting there one night, in the mobile home, just raging, and Chris Cass stole all of our helmets and some silver paint; he took them up to the extension and spray-painted them all chrome. We didn't even know it because he just blended back into the party. The next day when we all woke up, we were wondering where our helmets were, so we went outside the mobile home the Doc bought for purposes of skate visitation, and we saw a bunch of Chrome Domes sitting on top of the extension. That's how it all began." 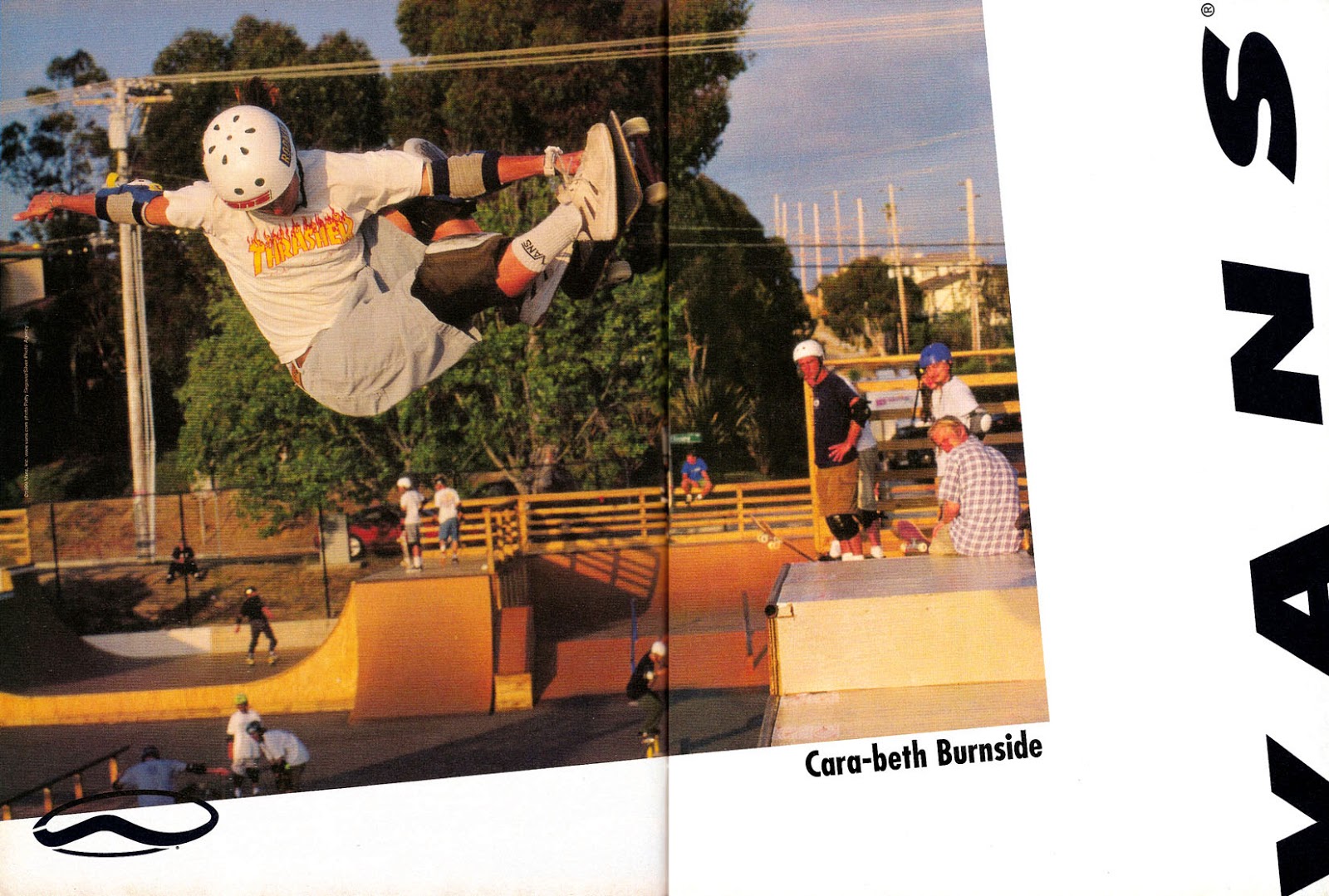 "I see myself promoting skating to make it a bigger, or in some way, better sport. I'm not out there skating because I want more girls to skate, but if I'm an influence to girl skaters that's cool. When I was younger, Patty Hoffman was doing all these tricks and I said, "Oh my God, that girl is ripping." It was that "if that girl can do it, I can do it" kind of thinking. I would love to see girls skate and get good. Maybe in ten years there will be more girls blowing doors and doing all sorts of rad tricks I've never dreamed of. All I can do is just be out there and skating in contests and demos, having other girls see me, and be cool to them if they come up and talk to me. That's important, too. If anybody wants to come up and talk to you, say a couple things, acknowledge them as a person. I see so many people get turned away."

It looks like the long awaited Vans video will be called Propeller and it premieres next month.

The photo is by Patty Segovia. 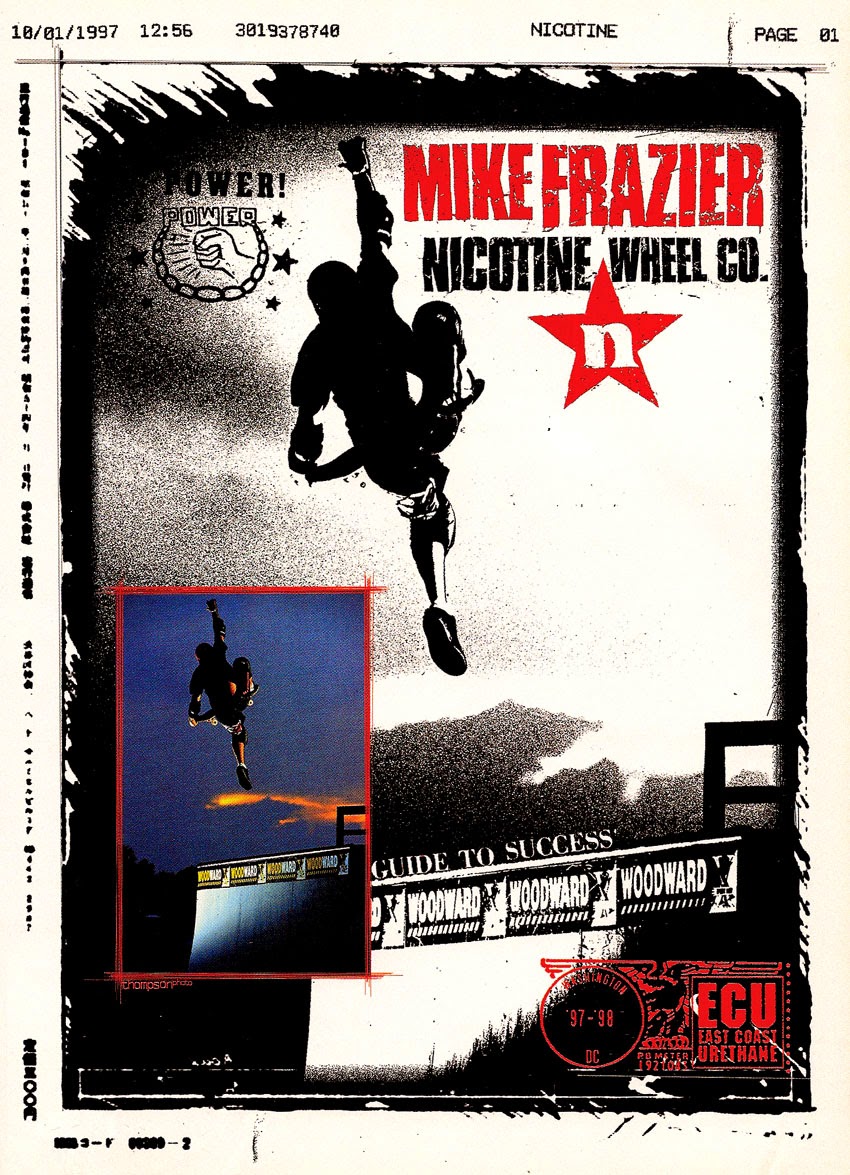 "Let it be known Barker Barrett wore Pumas and Adidas before anyone else got into the fashion show. He wore them so long ago, and now everyone has those shoes. It's like the big fashion thing now, you have to have the raddest pants, shoes, or whatever."

The photos are by Pete Thompson. 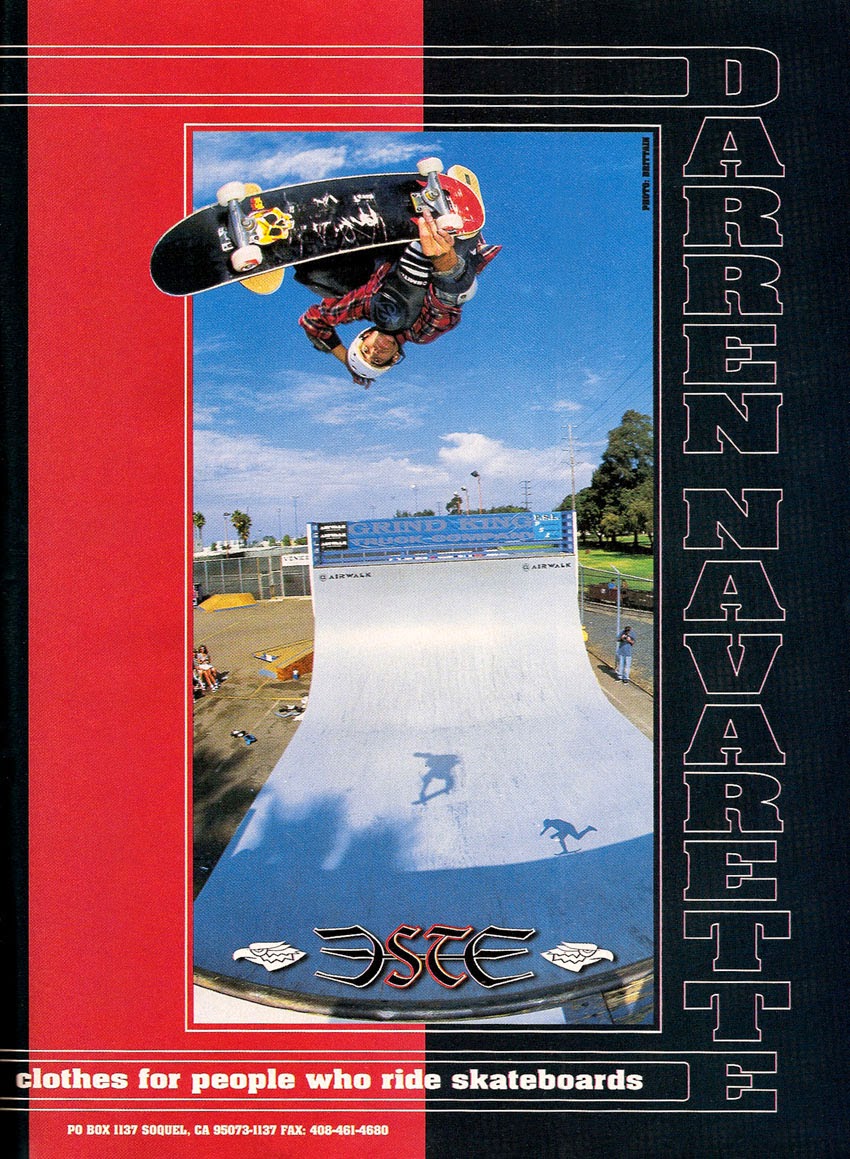 "I don’t know if I'm antisocial or weird or my brain works differently than other people's, but I found skateboarding and I was accepted. It was, “You skateboard? You’re with us.” It didn't matter what you looked like or how good you were. I skated with some guys who were not good and other guys did seven-foot airs, but we all skated together. You never cared. In the beginning, there were people who said, “Don’t invite this guy to Rumble,” and I listened to them. Now, I've learned: Don’t listen to anybody. If you skateboard, you’re invited. That's the deal. I told door security that if they have a pad bag, if they have that duffel bag that smells like that, then that means they’re skateboarders and they can come in."

The quote is from an interview on the Ride Channel with Darren. 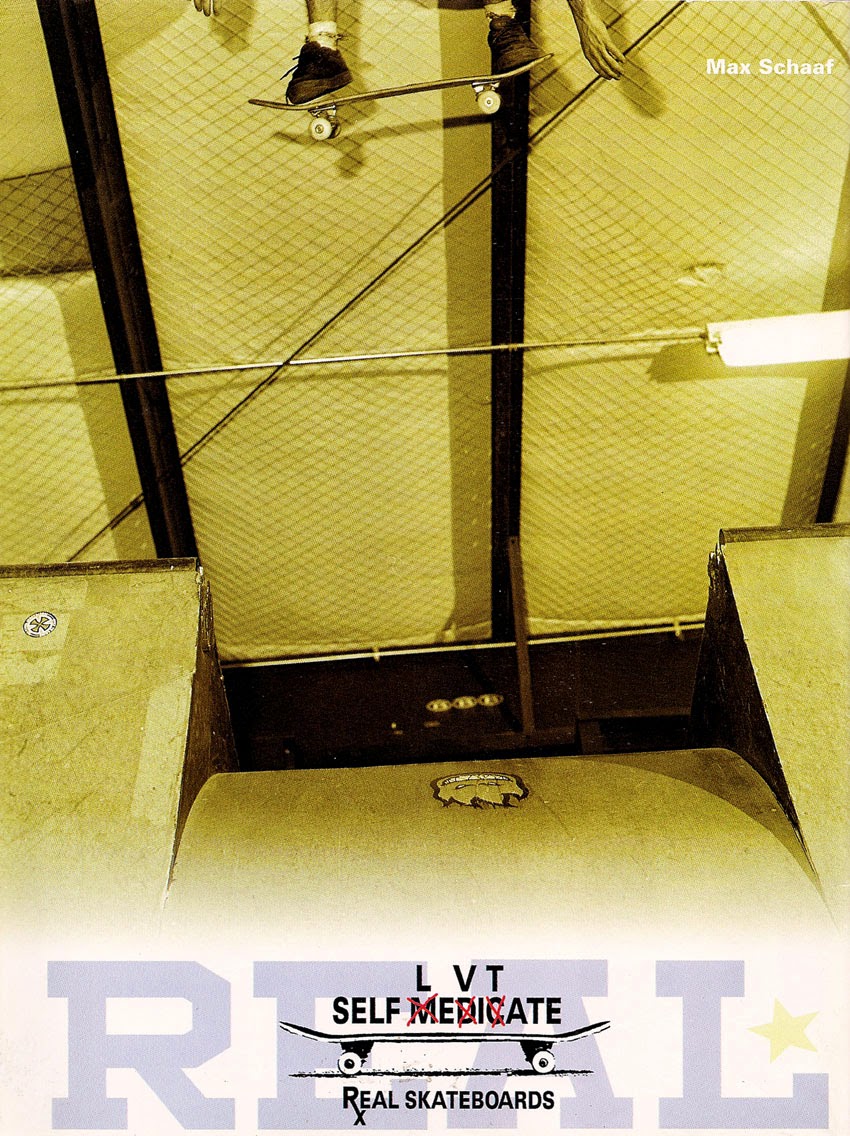 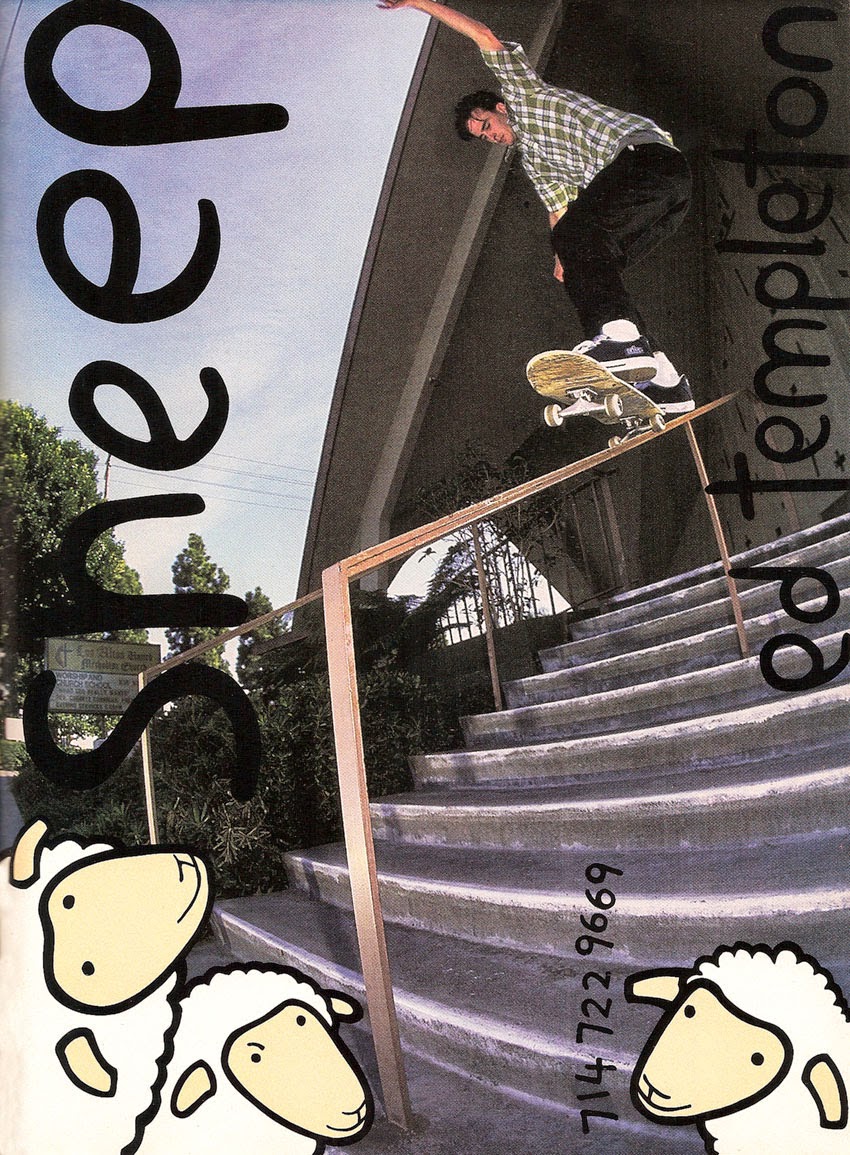 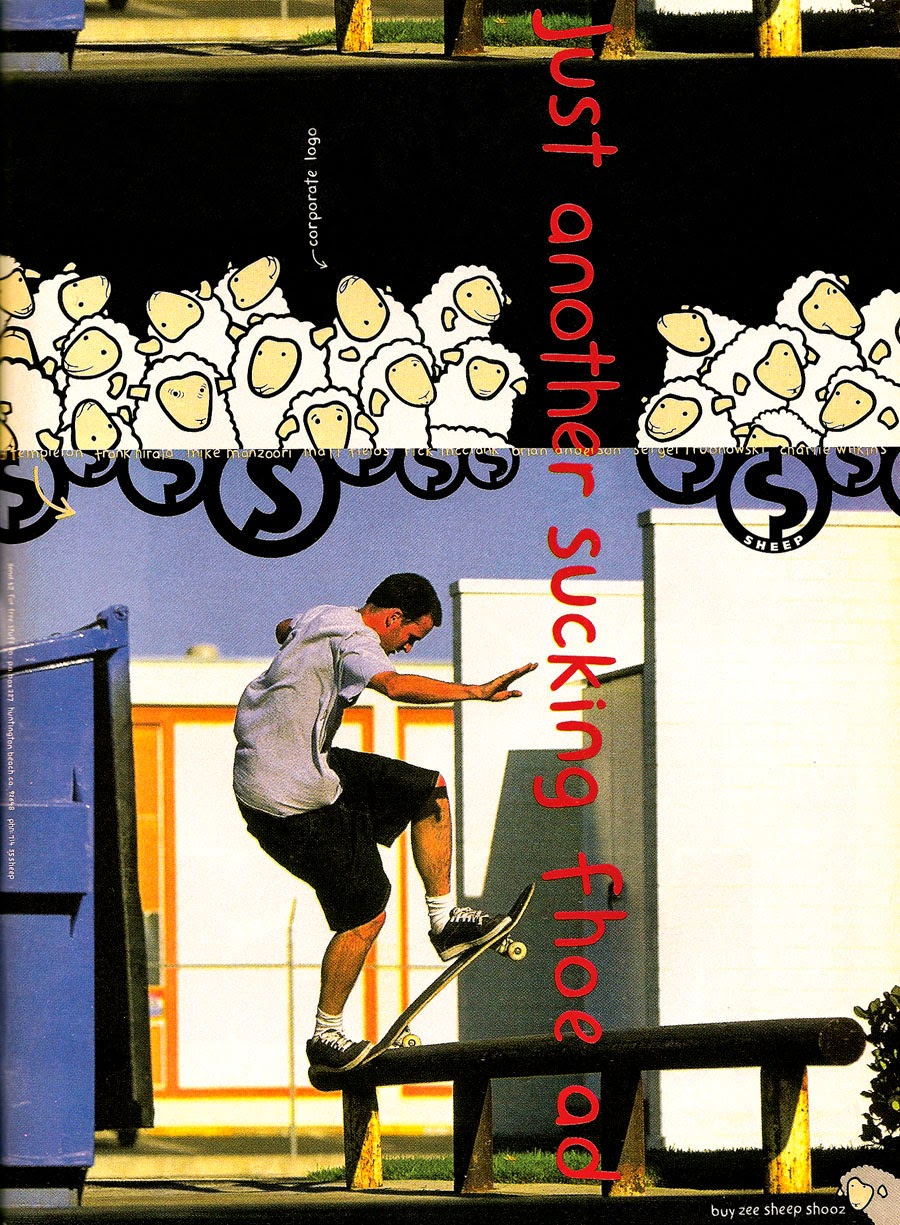 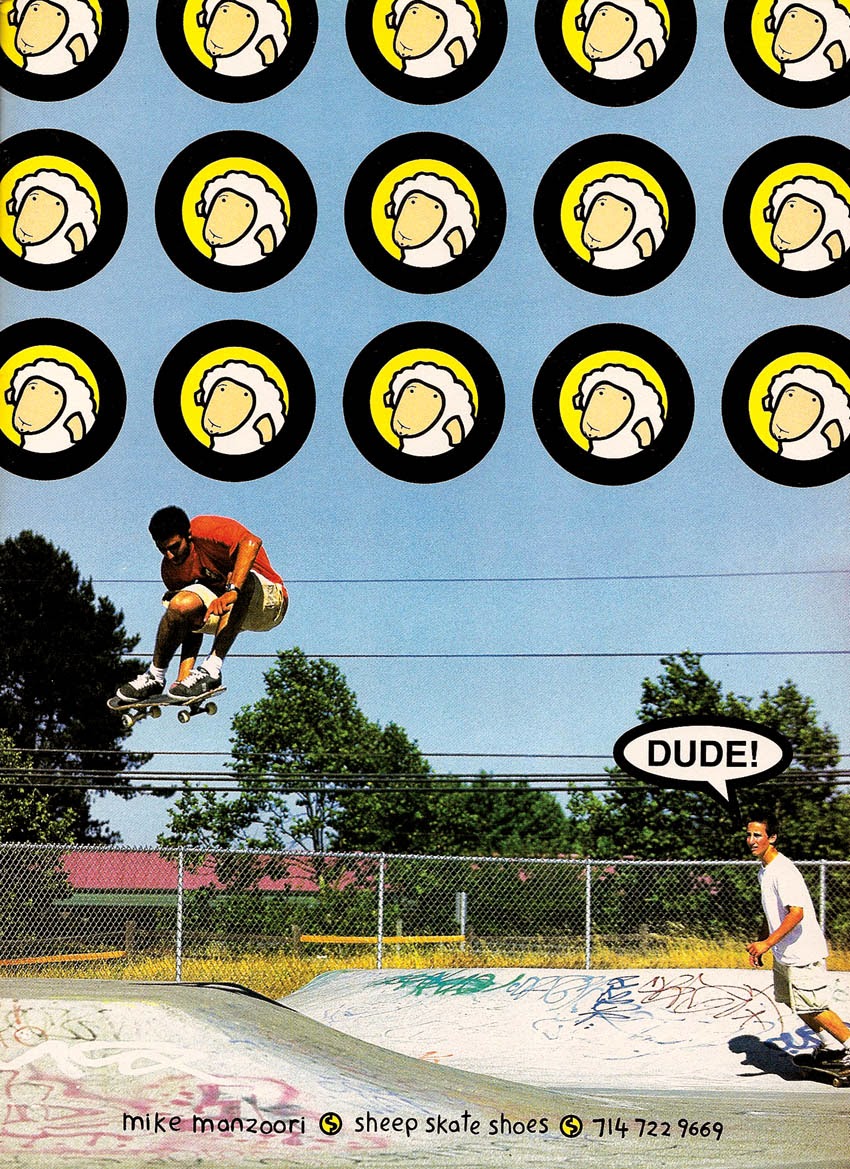 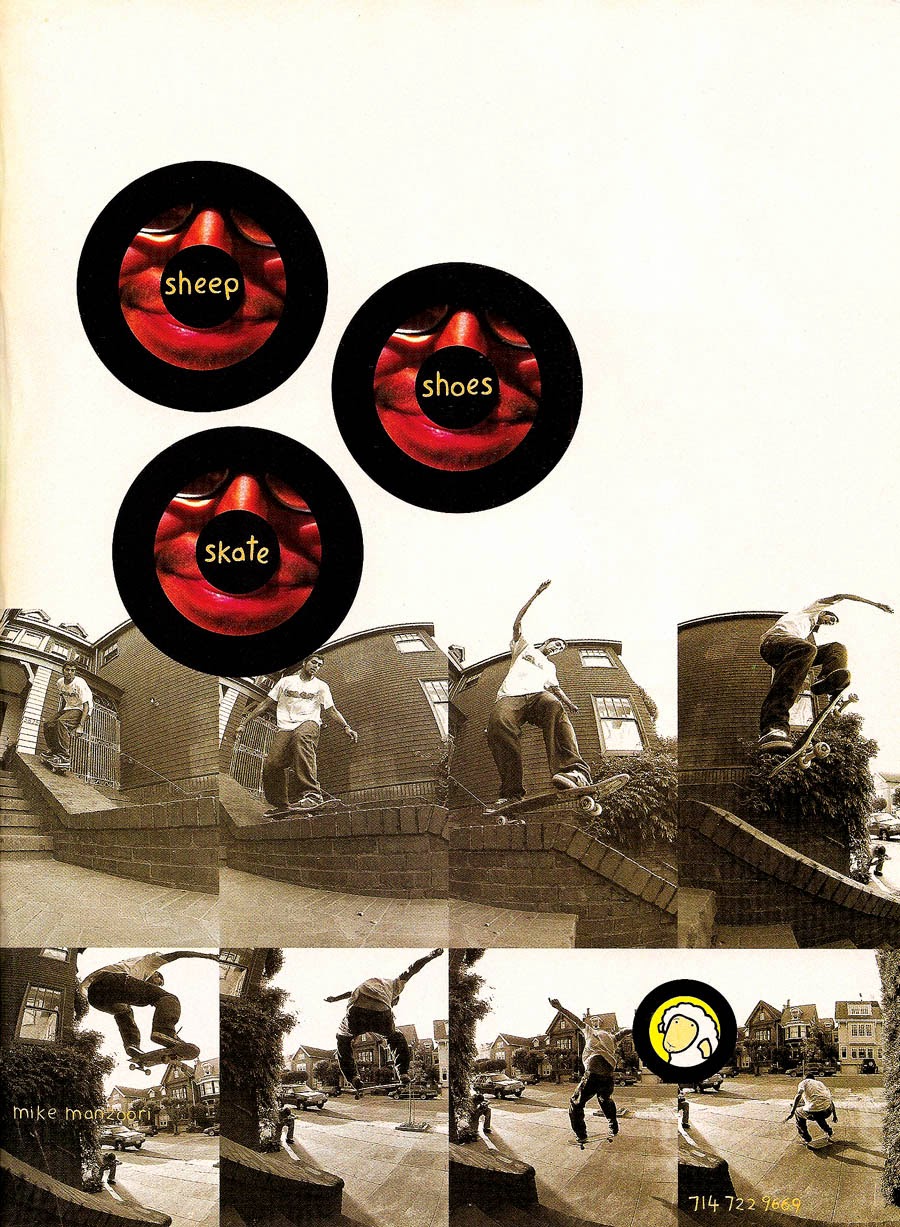 Mike is from London, England. He has ridden for Powell Peralta, ATM Click, and Adrenalin. He's on Blood Wizard these days. Mike has transferred his on board talents to behind the video camera. He currently works as a filmer for Sole Technology. 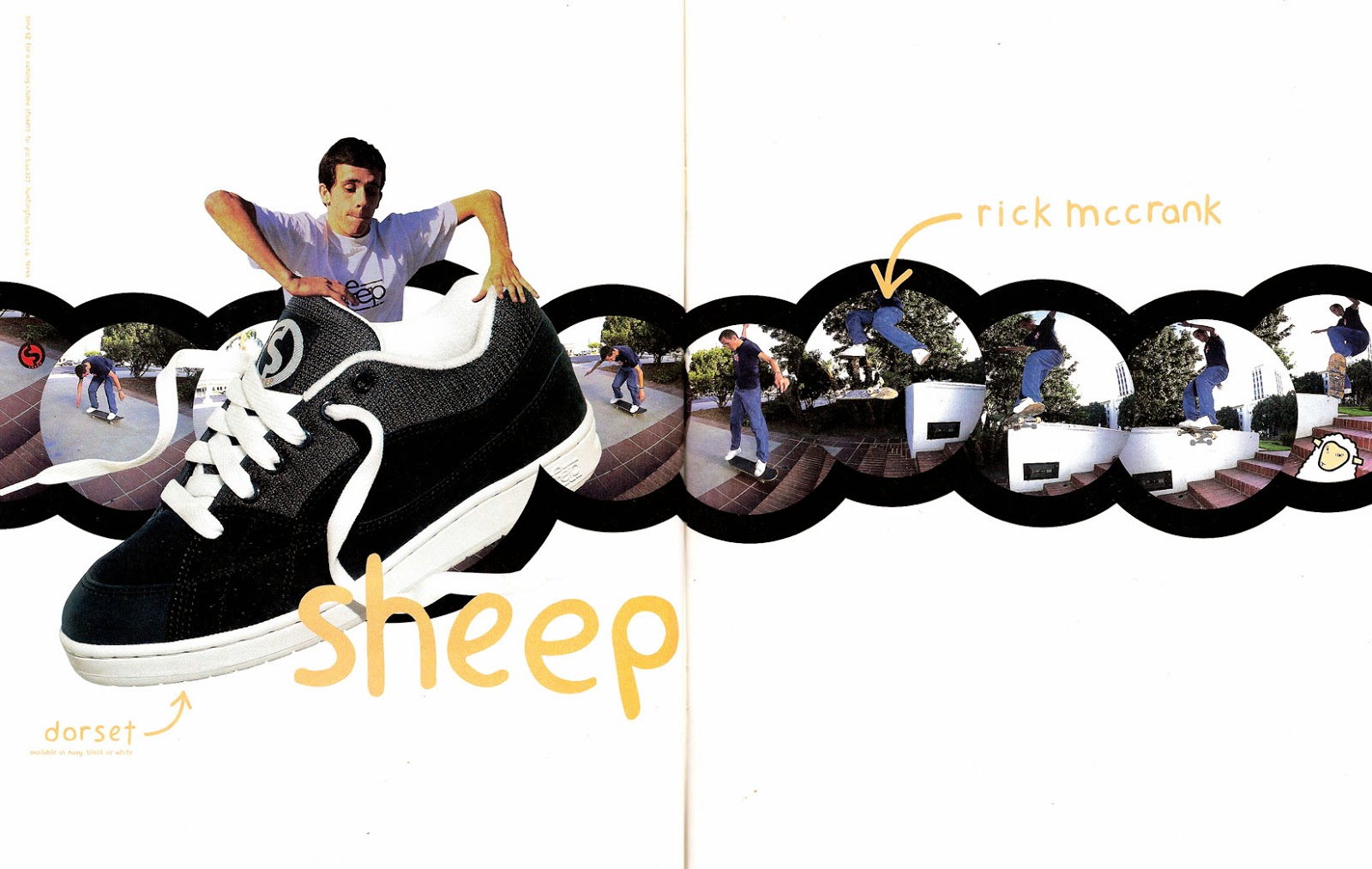 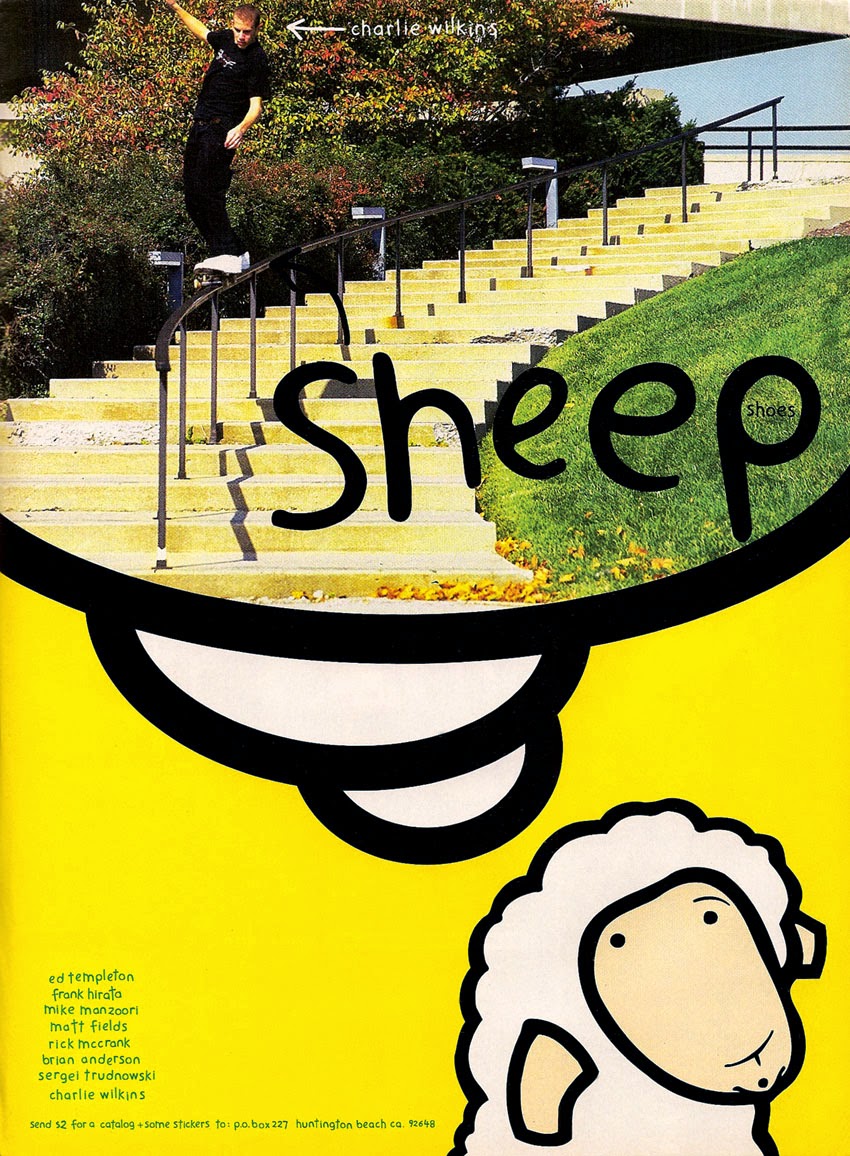 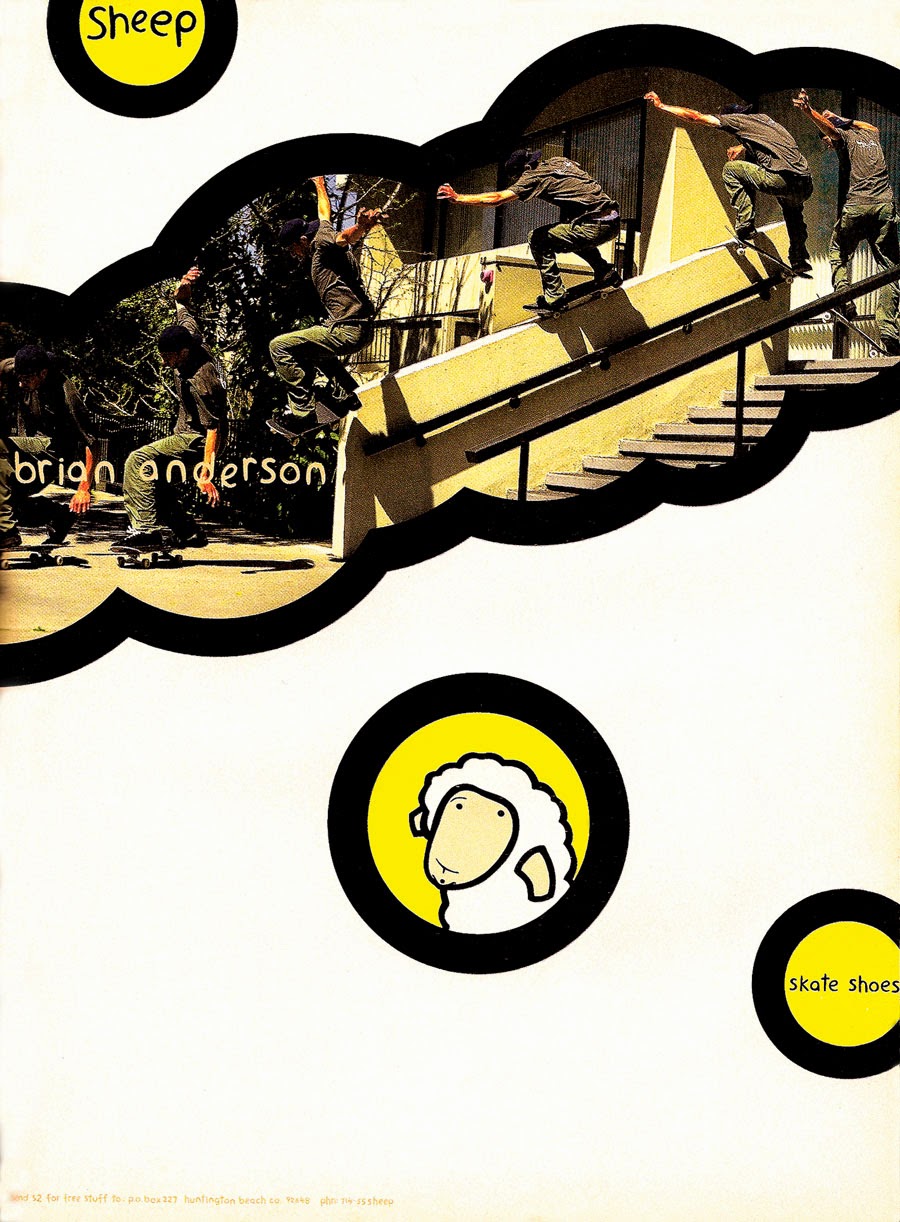 I'm a little under the weather today so that's about all I can muster.

If you've got a photo of Frank Gerwer petting a dog, then you really should use that as the cover photo.