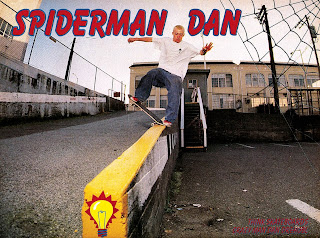 I got nothing beyond this nose slide to nose blunt transfer by Corpsey, which on its own is great. He's my favorite pro ever, but just refer back to that first sentence. All hail Cardiel. 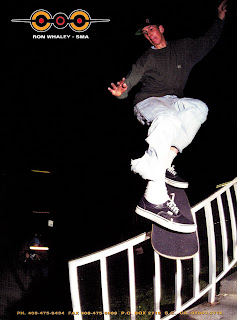 The tall guy throws down a back lip in the darkness. 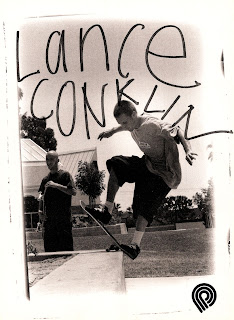 Kraftwerk is one of my favorite bands, all kinds of different bands. Bad Religion, Bauhaus, Joy Division, Smiths, Morrissey, all that shit, but I don't like mentioning it now because all these lame people go around saying how they're so alternative and try and hook up the bands they like. I've liked those bands for awhile, and the only reason I'm willing to talk about them is because Tony won't leave me alone. Lush is great, My Bloody Valentine, Curve, Assuck, Pitsarchy (we suck real bad, we're terrible), FYP, Hüsker Dü, The Dwarves. I listen to what I want, and when I want. I don't like rap anymore.

The interview was by Tony Hawk and Jeremy Klein. 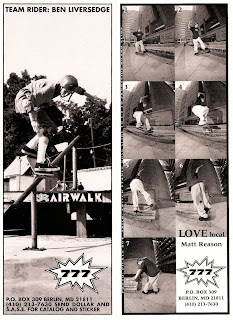 The early days of Liversedge and Reason. I like Ben's chopped off Vans. With all the mid and high tops currently on the market, this is a trend that needs to come back. Or maybe not.

What was the deal with 777? I don't think they were done by Intensity Skates as a precursor to Capital because the phone numbers didn't match up.

Matt does a switch stance nose slide to 5-0 to frontside board slide. Ledge dancing circa 1993. (More likely late 1992 since the ad is from March.) 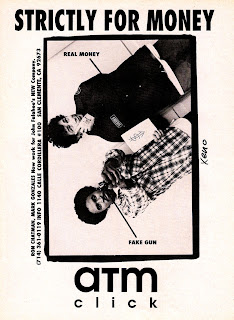 When we left the Gonz on Friday, he wasn't pro for anybody and didn't have a new company. A few months later he would start up ATM Click with John Falahee's backing. Ron Chatman was on the team, too. He had been riding for Milk after leaving World Industries. 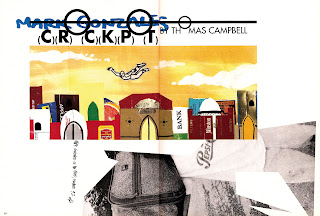 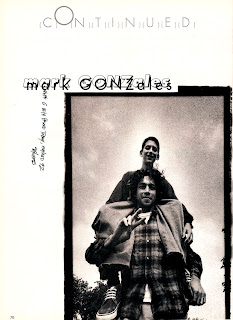 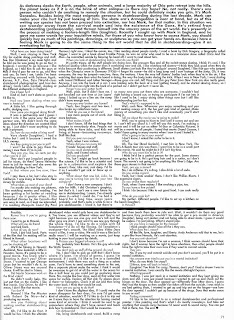 "I will not celebrate meaningless milestones." - Bart Simpson

This is the 500th post on Vert Is Dead. I figured I'd use one of my favorite Gonz interviews for today. I'd really like to see the video Mark talked about making with him filming just Ed Templeton skating turned into reality.

The photos and interview are by Thomas Campbell. 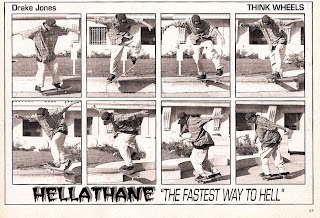 This was probably some of Drake's first coverage.

I like how Think mixed up the hesh with the fresh to create Hellathane. Although I don't think those terms were really used back in the early 1990s. 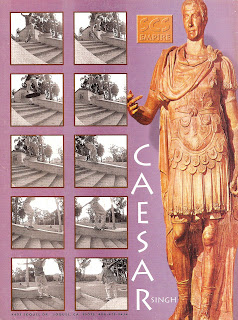 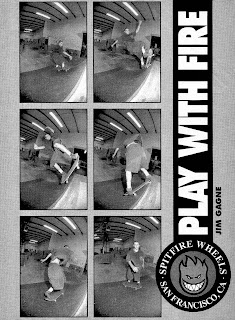 The Black Label rider bashes the coping in the big shorts/small wheel days.

I'm not a big fan of hip hop, but I always liked Guru's music in skateboard videos. It just seemed to work right. His voice fit with the skating. It is odd to hear his music independent of a skateboard video. I was at a party a couple of years ago and somebody played a Gang Starr album. Without Kenny Hughes skating, it felt like something was missing. 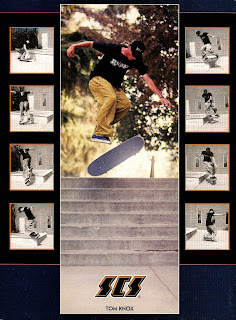 Tom flipping down some stairs and spinning around on a backside 180 nose grind to 180 out. I got nothing clever to add today. 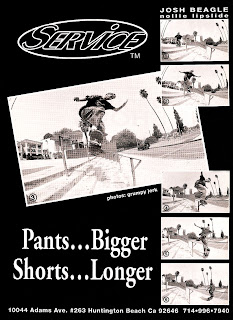 This ad came up as a request during Josh Beagle week back in February.

A general note about this site: If you want to track down a particular older scan that might be on here, use the search feature at the top of the page. Just type in the name of the skater and it should work. This same search feature also works on the Chrome Ball Incident. I use it all the time to make sure I number things right and avoid repeats.

Is Grumpy Jerk an alias for Tod Swank? 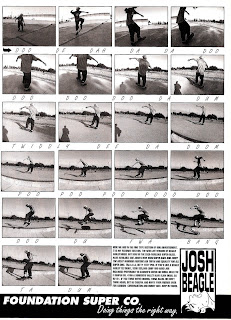 I always like when classic rock radio stations do a two for Tuesday deal where they play two songs by the same band in a row. In keeping with that spirit, here is the first of a double shot of Josh Beagle.

Is he doing a varial heel out of the manual?

This is his Foundation board with graphics inspired by Big Black's Songs About Fucking album cover. Feel free to substitute rip off for inspired if the mood suits you. Given the bands that Josh has said he likes in interviews, I'm calling this a tribute model to Steve Albini. 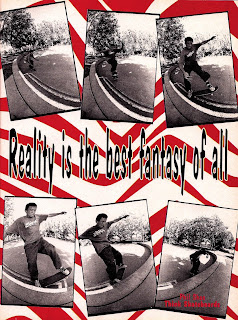 I thought about making that scan larger so you could see the graphics better, but the ad was a little on the crappy side. There's only so much magic you can work in Photoshop.

I've occasionally thought about buying a board just as collectable, but never followed through with any impulses. Decks can make nice wall art, but I'd rather just ride them. There's so much turnover now that it hardly seems worth keeping up with it all beyond what your next board is going to be. Nothing against the artists or the companies, we're just not going to see an era like the 1980s again where a pro was defined by their graphic.

My set up is a normal wood board that is 8" wide and somewhere around 32" long. No red, white or natural top ply. Yellow is frowned upon. Purple, grey or blue are preferred.

- Shorty's 1 1/8" phillips head bolts. I've got plenty of these stockpiled. For a while it was hard to find this size and I hoarded them.

- Lucky risers from 1997 or 1998 that I got at the Skate Station in Fayetteville, Arkansas. I want to see how long I can keep using the same pair.

- Speed Metal bearings. For some reason I got back into heavy metal in the late 1990s and was stoked on idea of a bearing company that had metal in their name. I said I would keep riding Speed Metal until they stopped making them. For a while, the quality was somewhere between OK and good, but the last two or three sets have been the fastest and most durable bearings that I have ever used. I don't have any of these stockpiled and they are getting harder to find. I've since lost interest in heavy metal.

- Spitfire 56 or 57 mm wheels. Always white and no super weird graphics. No cores or new technology. I'll go as low as 55.5 mm if it's a Spitfire with Dan Drehobl's name on it. Otherwise, I'm keeping things larger. I made it through small wheels and I don't ever want to do that again. I also like orange or light blue wheels, but haven't ridden those in ages. I hate black and red for wheels.

- Venture 5.25's. I usually ride the silver ones because they didn't make the colored models in the wider size until recently. Sometimes I like the idea of a colored truck and other times not. Lately, I've taken to creating my own trucks. I buy a set of Ventures 5.0's in a color I like and switch in my own wider hangers. That way I get a little color and correct truck width. I have a surplus of unused or barely used hangers to pick from. I put in my old bushings, too. My current trucks feel great and took no time to break in. I'm not at a Daewon Song or Matt Rodriguez level yet for truck modifications. I hope I never get there.

The Kettle Black can have a field day with all that. 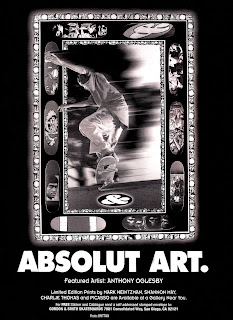 What's the deal with Krooked Gest boards? Can you skate them like a normal board or are you just supposed to squirrel them away somewhere?

The next board I set up in a couple of weeks will be an Andy Jenkins Wrench Pilot deck. It cost the same as a regular board and has a nice shape with good graphics, so I'm thinking the thing is fair game to ride. I wasn't considering these points when I bought the board, but now I am.

If sometime in the future, somebody is trying to catalog all 400 of this particular board, #156 got skated and isn't in good condition.

The photo is by Grant Brittain. 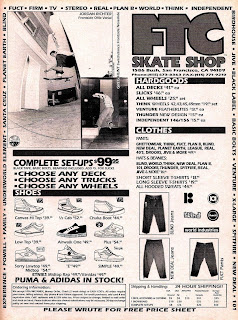 Family was going to be a company out of Deluxe with Jordan Richter and Greg Hunt as riders. It never happened and this quarter of a page in a FTC ad was the only time it was ever publicized. Richter soon rode for New Deal and Hunt became an am for Stereo.

Roughly twelve years ago, I was friends with this guy named Rich. He was a college student from Hawaii. Since there were a couple of other dudes named Rich, he obtained the nickname Hawaiian Rich. He used to skateboard, but I believe he hurt his knee and had to stop. He would still roll around a little. We would always wind up talking about skateboarding out at the bar. Hawaiian Rich was impressed that I knew who Robbie Gaskell was. He was friends with Robbie and skated with him all the time back in Hawaii. 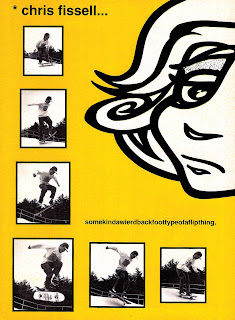 Tricky footed New Deal amateur and then Mad Circle pro. Poor guy probably catches a lot of crap for doing all sorts of pressure and late flips. I remember liking his part in 1281 for the innovation. 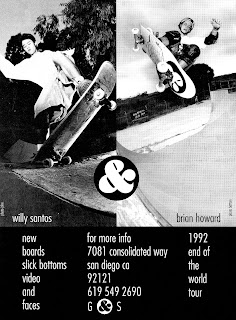 Thrasher posted Willy's part from Feasters the other day. I sort of forgot how amazing he was back then. Every trick is done moving fast and the landings are all solid with feet on the bolts. Willy made those sketchy pressure flip days look good.

Brian went on to better things at Planet Earth. 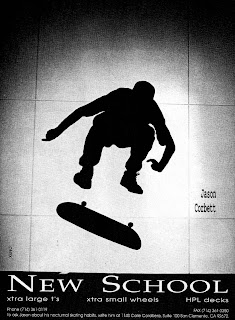 Jason is from Canada and rode for New School. He might have done the Barley grind before Donny Barley did. He does one on a ledge in a skatepark in the New School video from 1993.

I'm scanning new stuff tonight to fill the week out and then I'm going to figure out what I want to do for the next few weeks. It will probably be 1993 related things. 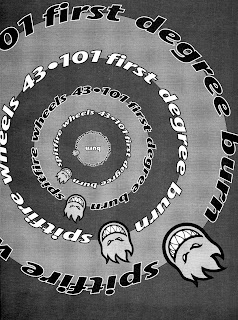 By my extremely scientific calculations of flipping through old Thrashers until Spitfire used it in an ad, this was the first appearance of the flame head logo. 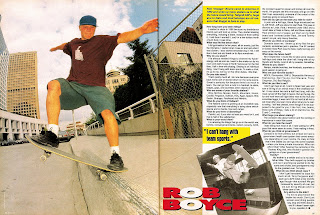 So stoked on the noseslide photo.

Sluggo was an am for G & S, turned pro in the early days of Real and then spent most of the 1990s on World Industries. He was the fourth pro for Real after Tommy Guerrero, Jim Thiebaud and Henry Sanchez, although Sanch wasn't with the company very long.

That's a TV shirt he is wearing. The drawing was also used for a 'zine Ed Templeton and Mike Vallely did.

Bryce Kanights was the photographer. 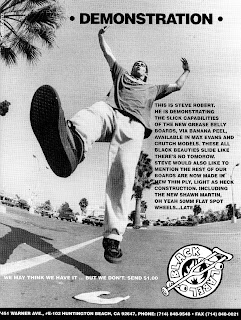