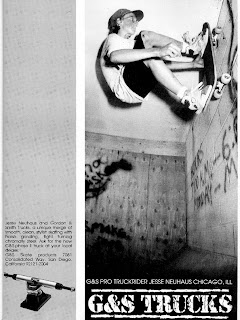 "We had Jesse Neuhaus, who was like 12 at the time, in a couple of the shots. But every shot with Jesse looked like a bunch of bikers stole this kid and were going to pimp him out on the streets." - Steve Dread

Neuhaus was and is still cool. He resurfaces every so often with a photo or an interview. Somebody needs to print one of the Alva team photos with him in it. I bet it would be hilarious.

This photo is by Rick Kosick. Yes, that is the very same Kosick who went on to work for Big Brother.

I've known Jesse since 1988. He is and has always been one of the most natural and fluid skaters I've ever seen. On top of that he's an awesome guy in general.

Jesse did the biggest FS ollie-oop I ever seen back when he was on FUN at a demo in IL , sick. steve

Jesse is sooo laid back and still so good, i was at a contest in 1990 and he beat Dyrdek, he just loves skating and none of the fame. that is skateboarding.

STFU Steve Dread. You were always a fuckhead. I remember when he worked for AWH distributors. I owned a local shop at the time and Dread and the owner of AWH Art Harris acted like they were doing you a favor by taking your money. Both are a couple pieces of shit. They helped kill the great skate scene from back in the day. I met Jesse N. a few times and he was pretty cool.

Harsh words for Stevie Dread are not appreciated on a Neuhaus post or any other for that matter. Its easy to sit behind a monitor and hate about 20+ year old shit. A great skate scene exists in Chicago with major contributions from both Jesse and Dread, where (or who) are you?